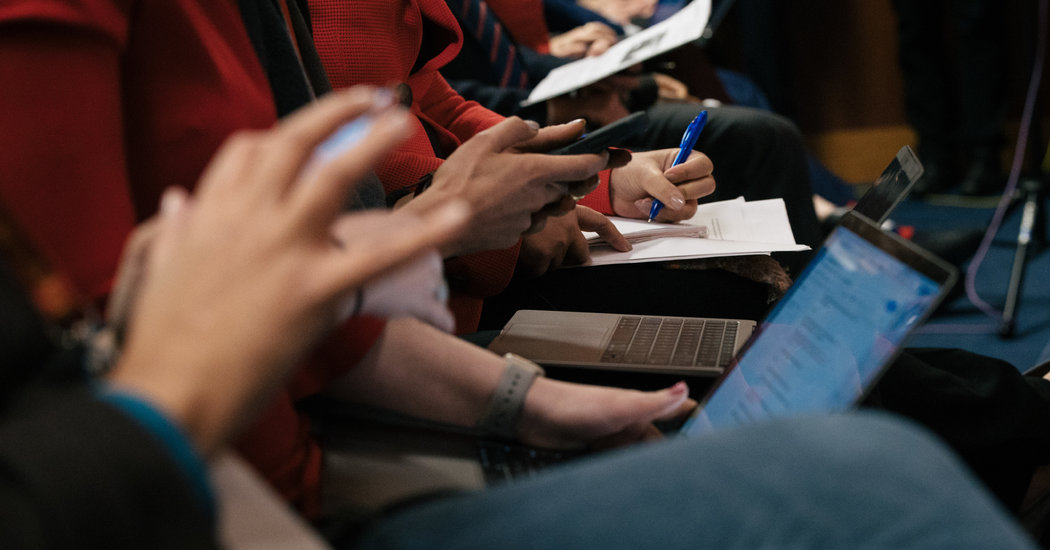 As the coronavirus crisis wreaked havoc in the news business last month, the newly installed president of the most prominent journalists’ union in the country, the NewsGuild, crossed a line that once seemed unimaginable: He asked the government for money.

The guild’s leaders voted to request “public financing for journalism.” In doing so, they set aside worries from traditionalists at publications including this one, where the chief White House correspondent, Peter Baker, told me he worried about “blurring the lines” by asking for help from officials he covers.

But the union leaders argue that any ethical unease or philosophical debate needs to take a back seat right now to securing members’ jobs, given the forces now threatening to destroy journalism.

“One thing we can’t remain objective about is our own demise,” said Jon Schleuss, the president of the NewsGuild, who took on the role last December.

Nobody pays much attention to labor union elections. (And the NewsGuild elections are particularly awkward for journalists to write about.) But the vote marked a little-noticed but powerful generational shift that is changing the culture inside newsrooms.

The guild was founded in the 1930s to raise wages and keep right-wing owners from meddling with the stories written by their more left-wing reporters. In recent decades, it focused mainly on negotiating issues like overtime pay and, often, finding the gentlest way to lay off its members in a dying industry.

But since 2015, a frenzy of organizing — first at high-profile new media outlets, then at troubled chain-owned newspapers — energized the union and brought in a new generation of activists. These millennial leaders’ experiences differed sharply from those of the veteran newspaper men who had long run the unions. The new leaders had come of age in the great recession and had been battered by layoffs at start-ups. Their sensibility was shaped not only by social media but by the progressive political moment.

Journalists started to see themselves as “workers” rather than “professionals,” an article in The American Prospect published on May Day, argued. They lost faith in a single, supposedly objective, typically white and male point of view. And their message has been overwhelmingly embraced by newsrooms: The NewsGuild and its rival, the Writers Guild of America, East, have won virtually every organizing battle they’ve taken on, including some in Southern states with anti-union laws. The two unions together have organized more than 90 newsrooms and more than 5,000 journalists since 2015. (NewsGuild represents more than 25,000 journalists and other media workers; the Writers Guild of America, East has more than 6,000 members, many in the entertainment industry.)

In New York, a campaign for more diverse leadership and a more aggressive attitude toward management replaced the incumbent leader of the Guild, Grant Glickson, a former page designer for The New York Times, with a longtime organizer, Susan DeCarava, who pledged to push the younger generation’s goals. At the union’s Washington headquarters, Mr. Schleuss replaced an incumbent who had been active with the union since 1981, before Mr. Schleuss was born.

The new leaders had been involved in organizing campaigns around the country that expanded the traditional focus of labor to include, for instance, using gender-nonconforming employees’ preferred pronouns at Vice, and dropping the use of nondisclosure agreements in sexual harassment cases at Condé Nast. Some of the newcomers were more relaxed than earlier labor generations about seniority, a crucial principle for veteran members but one that often put labor in conflict with diversity initiatives. They’re also trying to extend some of their organizing efforts to freelancers who aren’t in the union.

“As our society has evolved, so have our workplaces,” Ms. DeCarava said in an interview. “The issues we’re now organizing around and bargaining for — from funding models to structural inequity — are newly visible iterations of longstanding disparities in our industry.”

Their priorities also differ somewhat from earlier generations on core economic issues, said Lowell Peterson, the executive director of the Writers Guild. They are fighting harder for lower-paid journalists, sometimes at the expense of the stars, he said, and “there’s a little less interest in traditional work rules, which was hard for me to accept at first.”

And they don’t always know the basics of labor activism. Mr. Glickson recalled that when he was organizing the legal news site Law360 in New York’s Flatiron district in 2018, “They didn’t even know to circle in a picket line — they just kept walking all over the place.”

Now, most of the news you read on the internet is written by union members, from newly organized shops like Vox Media or The Arizona Republic to places like The Times and Washington Post, which have been represented by unions for generations. The culture of young people in newsrooms was individualistic to a fault in the early 2000s when the internet opened up paths for bloggers and encouraged the creation of personal brands. But it has now turned toward the collective. Union drives are rallied around and enforced on Slack and Twitter.

The new activism has also produced new possible conflicts: The unions are now cheered on — and pandered to — by high-profile politicians, including Senator Bernie Sanders, Representative Alexandria Ocasio-Cortez, and Mayor Bill de Blasio, whom their members also cover. And the unions often express solidarity with workers they cover, though union leaders told me their public stances aren’t supposed to influence their members’ work.

Great American journalists since Upton Sinclair and Nellie Bly have sided with the underdog, but in today’s unionized newsrooms there’s a new and more visible interest in labor reporting, especially of the labor battles in the tech industry.

“The experience is giving a lot of journalists class consciousness in a way they didn’t have before,” said Hamilton Nolan, who set off the new unionization movement in 2015 when he led a drive at Gawker, and now writes for In These Times. “There’s better and more nuanced coverage of class issues in general, and over time it’s going to shift the mix of news.”

In the coronavirus crisis, union leaders are focused on what touched off the new wave of organizing in the first place: protecting reporters in an unstable industry.

Last year, when I was editor in chief of BuzzFeed News and on the management side of an organizing drive, I doubted that the guild would be able to help its members make real gains at places where profits are scarce, and I worried that they’d simply make a tough business even harder to operate. (Disclosure: I agreed with the Times when I was hired that I wouldn’t cover BuzzFeed extensively in this column, beyond leaning on what I learned during my time there, because I retain stock options in the company, which could bring me into conflict with the Times’s ethics standards. I also agreed to divest those options as quickly as I could, and certainly by the end of the year.)

But the unions have proved their worth to their members in this moment of crisis. Many have won concessions. At the Miami Herald, union leaders used the “status quo protections” that are in place during contract negotiations to avoid layoffs. At The Denver Post, they won promises that there wouldn’t be layoffs for, at least, a period of months.

At the Omaha World-Herald and The Los Angeles Times, the unions pushed management to offer a “work-sharing” program that, under the complex terms of the federal stimulus, may actually mean that some workers taking day-a-week furloughs will earn more than they did working full time, at least through July 31. (To their frustration, reporters have been told they’ll be legally barred from pitching in on the biggest story of their lifetimes on the days they are furloughed, though they will still be allowed to tweet, Matt Pearce of The Los Angeles Times’s said.)

Union leaders feel vindicated. The possibility of an impending crisis was “the very reason that I started the organizing drive,” said Rebekah Sanders, a reporter for The Arizona Republic.

But the power of unions depends in part on the strength of their industries. As long as the news industry is in crisis, the news unions will be fighting with management over scraps.

At BuzzFeed last year, I tried to persuade both my skeptical management colleagues and (in a secret meeting I wasn’t supposed to be having) skeptical union leaders that we should together confront the forces weakening our industry — rather than focus solely on adversarial bargaining issues. The unions could use their big new voice — and their members’ outsize presence on social media — to fight for the changes that would reorder the whole industry. In particular, they could join a global push to retake ground from Facebook and Google, which have sucked up much of the advertising revenue that used to pay journalists’ salaries.

The publishers, whose attitudes toward organized labor range from resignation to hostility, should see an opportunity for an alliance of convenience, too.

“I would love to work with the journalist unions more on the digital platform issues,” the chief executive of the publishers’ lobby, the News Media Alliance, David Chavern, told me in an email “Publishers and unions can then debate how to share an increasing, rather than decreasing, pie.”

There is a big opportunity now for the unions to speak more loudly, and for gatekeepers to listen to them. I just left management and I’m not a guild member, but I’d rather see Mr. Schleuss or Ms. DeCarava speaking for the interests of journalists on television, on panels and on Capitol Hill than the usual run of consultants, academics and media critics — many of whom are one way or the other taking money from tech companies. Publishers and editors are navigating complicated business relationships with Facebook and Google, too.

And I would, of course, rather see the famous inflatable rat outside Google’s offices than my newsroom. That’s where the money is.