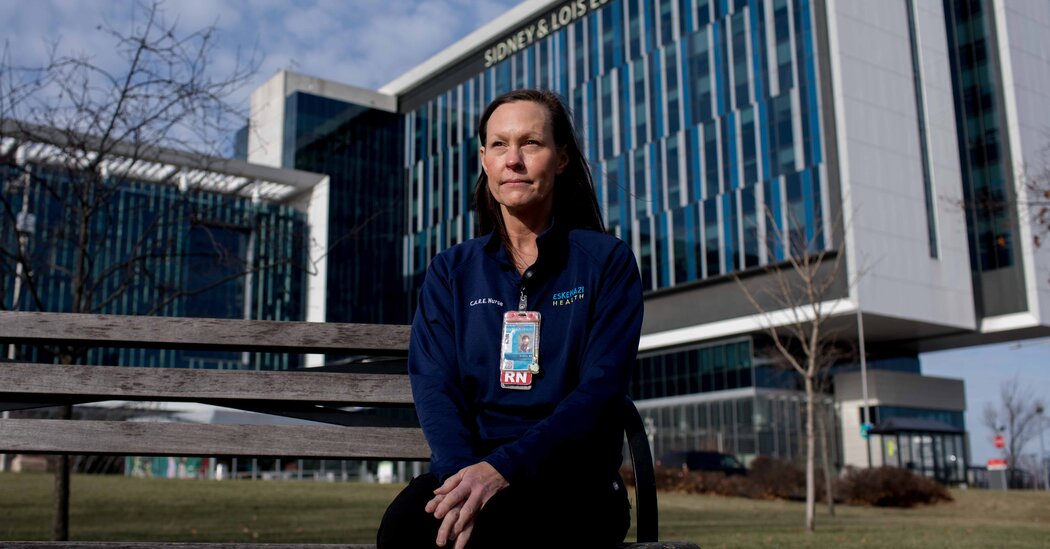 The toll on health care workers, many of whom are giving up their holiday to treat dangerously ill Covid patients, is severe.

INDIANAPOLIS — Of all the Covid patients that Ronda Stevenson is treating over Christmas, there’s one she cannot stop thinking about. He has been hospitalized for 10 months, and in all that time his 7-year-old daughter has never once been allowed to visit, prohibited from the hospital by age restrictions that keep families separated. Situations like this are bringing even veteran health care workers to tears.

Ms. Stevenson, an intensive care unit nurse at Eskenazi Health in Indianapolis for the past seven years, cries as she talks about her patients and their families, making clear the grinding toll of the pandemic on already exhausted hospital work forces.

Instead of taking holiday vacations this weekend, workers at strained hospitals across the nation are working 16-hour shifts. Some have been on the job every day for weeks. Festive meals have been replaced with protein bars and sports drinks.

This Christmas weekend, with the United States facing another surge of illness stoked by a proportion of the population that remains unvaccinated, frontline workers are again sacrificing time at home with family to tend to Covid patients. In Indiana, which has among the highest rates of hospitalization and lowest rates of vaccination in the country, the situation is especially acute.

“A lot of people, including myself, had scheduled time off but are now being asked to come in and pick up shifts to cover for one another and meet the increased demands of patient care,” said Dr. Graham Carlos, the executive medical director at Eskenazi, which is at capacity and has had a backlog of patients in the emergency room.

He worries that it will only get worse. “If the numbers continue as they are, a tidal wave of infections is going to hit hospital systems, putting us in dire straits,” he said.

Nearly two years into a pandemic that shows no sign of abating, doctors, nurses and other frontline workers have already faced the emotional toll of mass death in their hospitals. They have endured the frustration of pleading with the public to take precautions only to watch outbreaks unfold as people ignored the call for help. They have suffered the moral distress of not being able to give patients the ideal level of care.

But this season, there is a new strain on the system: Many workers who persisted through the first year of the pandemic have departed jobs because of burnout and anxiety. And with the Omicron variant pushing case numbers up dramatically, the caregivers who remain are getting infections, too, straining staff levels in unpredictable ways.

“This is the worst I’ve ever seen it,” said Maureen May, a nurse with 37 years of experience who serves as president of the Pennsylvania Association of Staff Nurses and Allied Professionals. She canceled her own holiday plans to pick up a shift on Christmas Day so that a co-worker could have time away.

Facing urgent concerns about hospital staffing shortages, the Centers for Disease Control and Prevention this week shortened the isolation periods for infected health care workers, allowing them to return to the job in seven days, instead of 10. President Biden also said that 1,000 military doctors, nurses, paramedics and other medical personnel would be deployed to shore up staffing levels at hospitals in the coming weeks.

At IU Health Methodist Hospital in Indianapolis, the National Guard has been helping with tasks such as transporting patients and cleaning. Now, a 20-person Navy team is arriving to help supplement the medical staff, which is depleted in part because about 350 workers across the broader hospital system are out with Covid or because they have been exposed to the virus.

The hospital’s staffing shortage comes during a crush of patients that has forced the hospital to open up units that haven’t been used in years. Patients across the hospital system are being cared for in nontraditional spaces, while others are waiting in the emergency room for rooms to become available.

“In my career, I’ve never seen the E.R. as busy or full as in the last month or two,” said Dr. Mark Luetkemeyer, the chief medical officer for IU Health’s adult academic health center.

The strain has hit all corners of the hospital. Todd Walroth, the pharmacy manager for clinical services and a critical care pharmacist at Eskenazi Health, describes long days, including some 18-hour shifts. His family sometimes eats dinner at 10 p.m. — with his young children up past midnight and then sleeping late into the morning — so he’s able to spend time with them.

His team is challenged not just by staffing shortages but by scarcity of medication. “We’ve had some really, really tough days trying to make sure, for example, that our patients that are on a ventilator still have pain meds and sedatives and that they’re comfortable and calm and their pain is controlled,” he said.

Across the nation, there are about 70,000 people hospitalized with Covid, up about 50 percent from early November. Health experts fear hospitalizations could increase with the rapidly spreading Omicron variant.

At Eskenazi Health, the critical Covid patients in the I.C.U. are those who have not gotten the vaccine, Ms. Stevenson said. Across Indiana, just 52 percent of the population is fully vaccinated.

She herself had been wary of getting the vaccine and didn’t do so until she was required to for her job. Since then, she has grown thankful for it, as she watches so many unvaccinated patients roll into the I.C.U.

Government and medical leaders have pleaded with the public to get vaccinated to limit the spread and damage of the virus.

The Omicron variant has spread rapidly throughout the country in recent days even as hospitals have been struggling to manage the effects of the Delta variant that was previously the most dominant strain. While the latest surge and emergence of Omicron have led some cities and states to reimpose a few virus restrictions in recent weeks, much of the country continues to live close to normal, raising fears that Christmas and New Year’s gatherings will fuel further spread.

With the burden on hospitals potentially growing, there is also fear that the pandemic’s relentless toll on medical workers will bring fundamental challenges that could linger well beyond the pandemic. Surveys have detailed widespread burnout among workers, and a study this month found that the impact of that burnout is just starting to unfold, with 20 percent of physicians and 40 percent of nurses reporting that they intend to leave their jobs.

Those who are still working are figuring out how to cope.

Dr. Carlos said that recently, after working for three weeks straight in the I.C.U., he was asked to pick up a Saturday shift at a large hospital in Indianapolis. He had promised to do some Christmas shopping with his eldest daughter that day. And at home, the gutters needed cleaning.

Dr. Carlos ended up declining the shift. But as he was Christmas shopping, he was consumed with guilt that his decision was causing more work for his colleagues. That feeling ruined the time away.