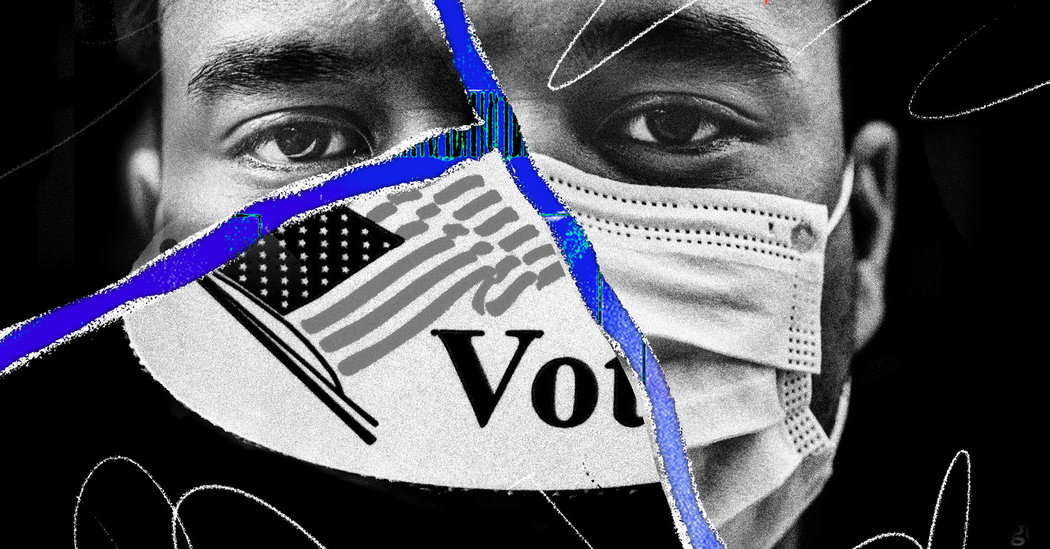 Will New York postpone its primary? (Maybe.) Do polling places have hand sanitizer? (Don’t count on it.) And what happens if President Trump tries to cancel the election? (Probably not what you think.)

As the coronavirus spreads across the country, it has thrown much of American life into question, including the way we vote. In these uneasy days of social distancing, how can a democracy honor its duty to hold free and fair elections when doing so could aggravate a public-health crisis that threatens to kill millions of its citizens? Here’s what people are saying.

Gov. Mike DeWine of Ohio decided that holding an election now would be an unacceptable health risk. On Monday night, Mr. DeWine, a Republican, defied a court ruling and called off the state’s presidential primary just hours before voting was supposed to start, pushing back its election possibly to June; Kentucky, Louisiana and Maryland also delayed their presidential primaries until June, while Georgia pushed its to May. While Joe Biden’s campaign opposes postponements, Bernie Sanders has been more receptive to the idea: “I’m thinking about some of the elderly people sitting behind the desks, registering people, doing all that stuff. Does that make a lot of sense? I’m not sure that it does,” he said on Sunday.

Elections held now could have their legitimacy questioned, as Jon Favreau, a former speechwriter for Barack Obama, suggested:

But some think postponing the primaries would be a grave misstep, in part because there is no knowing when the crisis will end. “It is the sacred right and duty of Americans to cast their ballots for our nation’s leaders,” Terry McAuliffe and Tom Ridge, the former governors of Virginia and Pennsylvania, write in Politico. “We must all ensure they’re given the opportunity to safely do so.” They argue that states should keep to the current primary schedule while expanding the use of mailed ballots to minimize the risk of coronavirus transmission. The logistical challenges of doing so on such short order, though, are formidable; President Trump called the idea of postponing the primaries “a very tough thing.”

Bernie Sanders can and should end the primaries by dropping out, Dan McLaughlin argues in National Review. Delay can be a workaround when an election still needs to be held, he says, but this one does not, since Mr. Sanders now stands very little chance of winning. “Nobody will care if all the remaining Republican primaries are canceled,” Mr. McLaughlin writes. “The only reason to keep voting on the Democratic side is because of Bernie Sanders. Ending his campaign now would be the right thing for Bernie to do, for the good of the country.” Ryan Grim, the Washington bureau chief for The Intercept, tweeted:

But Mr. Sanders has been a uniquely important voice during the coronavirus crisis, Gabriella Paiella writes in GQ. “Sanders has spent a lifetime preaching about the necessity of acting collectively,” she says. “In a situation like this, when America’s streak of rugged individualism spells out a death sentence, calling for togetherness is not only comforting, it’s the best option we have for survival.” If Mr. Sanders drops out now, he’ll forfeit some of his ability to shape the Democratic Party’s response to the crisis, Paul Blest argues in Vice. In any case, Michelle Cottle writes in The Times, Joe Biden will need to work overtime to convince progressives that he understands their concerns and can be trusted to address them.

OK, but what about November?

President Trump cannot cancel the general election, as The Times’s Alexander Burns explains. The Constitution mandates that the president’s term expire on Jan. 20; short of a constitutional amendment, that isn’t changing.

But Congress could vote to delay the election a couple of months, as Dominic Holden reports at BuzzFeed. That’s still highly unlikely, and it’s too early to tell whether there would be any public health benefit to doing so. Justin Levitt, who led the Justice Department’s voting section during the Obama administration, told Mr. Holden, “If virus fears are bad enough in early November that you can’t hold an election in many places, they’re still going to be that bad on Dec. 31.”

[Related: “Trump Can’t Cancel the Election. But States Could Do It for Him.”]

The United States has held elections during a pandemic before. At the height of the 1918 flu, midterm elections proceeded relatively normally, according to a 2010 article by Jason Marisam in Election Law Journal. Despite bans on public gatherings, there was little public debate about postponement, in part, he says, because of “the push for public displays of civic-mindedness” during World War I. But turnout was significantly depressed, and, as John M. Barry notes in The Times, government officials and newspapers misled the public about how dangerous that flu really was: All told, it killed some 675,000 Americans.

The presidential election is far enough away that its voting process can be overhauled. To that end, Senators Amy Klobuchar and Ron Wyden have introduced a bill that would guarantee every American a secure mail-in paper ballot and help states pay for printing, self-sealing envelopes, ballot tracking and postage. In-person polling sites need to remain open for those unable to vote by mail, so the bill would require all states to hold at least 20 days of early voting to cut down on crowding.

Democrats should refuse to pass any big stimulus bill unless it includes such election protection measures, the Times columnist David Leonhardt writes. “That may sound like bare-knuckle politics, but preserving democracy calls for toughness,” he says.

Taking actual voting online, on the other hand, is a bad idea, Dale Ho, the director of the Voting Rights Project at the A.C.L.U., argues in The Times. “While we should do everything we can to make voting accessible, the consensus of cybersecurity experts is that we are simply not prepared to ensure the security of online voting,” he writes. “In this case, the cure would be worse than the disease.”

MORE PERSPECTIVES ON VOTING IN THE TIME OF CORONAVIRUS

“Coronavirus could change how we vote in the general election. That’s not necessarily bad.” [The Washington Post]

“In Arizona, Voting During a Pandemic Is a Way to Feel Normal” [The New York Times]

“Are Voters ‘Essential Personnel’ During a Pandemic?” [The New York Times]

Here’s what readers had to say about the last edition: How to socially distance and stay sane

Bernardo from Maryland: “I am 80, I am not coughing or sneezing and have a stable body temperature. I am trying to apply most of the recommendations on social distancing that you give to protect myself. However, if I have to go out to buy something I cannot avoid someone getting closer than six feet. What should I do?”

Mutual aid groups have sprung up across the country to help those most at risk meet their food, medical and other needs. Here are a couple of resources for finding them.