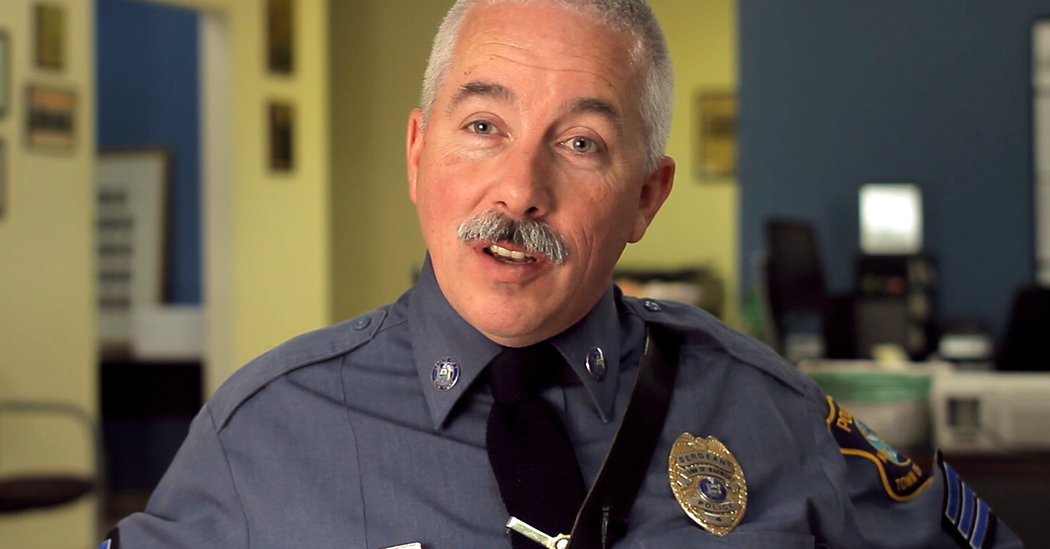 Editors’ note, June 12, 2020: The divisive national debate on race and policing may be at a boiling point, but it’s been simmering in communities across the country for years. We wanted to highlight this video from 2018, when filmmaker Samantha Knowles documented the tense conversations on whether her hometown was willing to say that black lives matter as much as blue.

In 2016, about a month before the presidential election, my dad called to tell me about a blue line that was painted in support of the police on one of the roads in my hometown. He described the controversy that was starting, mostly in the form of strongly worded letters in the local paper. I grew up in Warwick, N.Y., about 50 miles north of New York City. After that call from my dad, I immediately began filming what ultimately became one of the ugliest disputes in my small town’s history.

Warwick is a mostly white, rural, conservative-leaning town, and my family is one of few black families in the community. As many were quick to point out, Warwick has not been a place with known instances of police misconduct against black people, nor a place where police officers have been assassinated. To many, this suggested that Warwick’s blue line was, as the mayor stated, “just a tip of the hat” to the Warwick police. But ultimately the blue line’s presence in Warwick was about race. By painting a blue line down one of its streets, Warwick had joined the divisive national debate on race and policing.

That’s what compelled me to make this film. In the nearly 20 years my family had lived in Warwick, there had never been an issue there that had touched on race quite like this. As someone who had grown up and gone to school there, I knew that issues around race were always quietly just below the surface — and the blue line was finally pushing them above ground. How Warwick decided to address or not address the controversy brewing around the blue line would say a lot about its relationship to race as well.

As the debate unfolded in Warwick, I encountered all kinds of conflicting opinions about the blue line, and thus about race and policing. As a black filmmaker documenting this controversy, I encountered opinions that I completely disagreed with, and in some cases they were mired in falsehoods (for the record, Black Lives Matter is not a hate group). My hands shook as I filmed the meeting at the center of the film — and what I heard did change how I felt about my hometown.

In the last line of the film, Sergeant Mullins of the Warwick Police Department reflects on the blue line and (perhaps naïvely) hopes that lines won’t matter after the blue line fades. I thought a lot about whether this should be the last line of the film. But I ultimately chose to include it because I wanted that statement to be a point of reflection. I would hope that one day lines and what they represent won’t matter, but what would that take? There is some hope — energized by both the blue-line controversy and 2016 election, many in Warwick have continued to engage in local activism.

Though the line has now faded to just a few flecks of paint, the underlying issues it represented are nowhere near fading. While I hoped the controversy would propel Warwick into a robust conversation around race, that never happened. Blue lines have continued popping up in other towns at the same time that (unsurprisingly) more black men and women continue to be killed, harmed and profiled by police around the country. And there was recently a brand-new political divide in Warwick around the nationwide student-led campaign to end gun violence in schools. So I know that we’re a long way away from a world in which lines (and any divides, for that matter) don’t matter. I just hope we’re making progress.