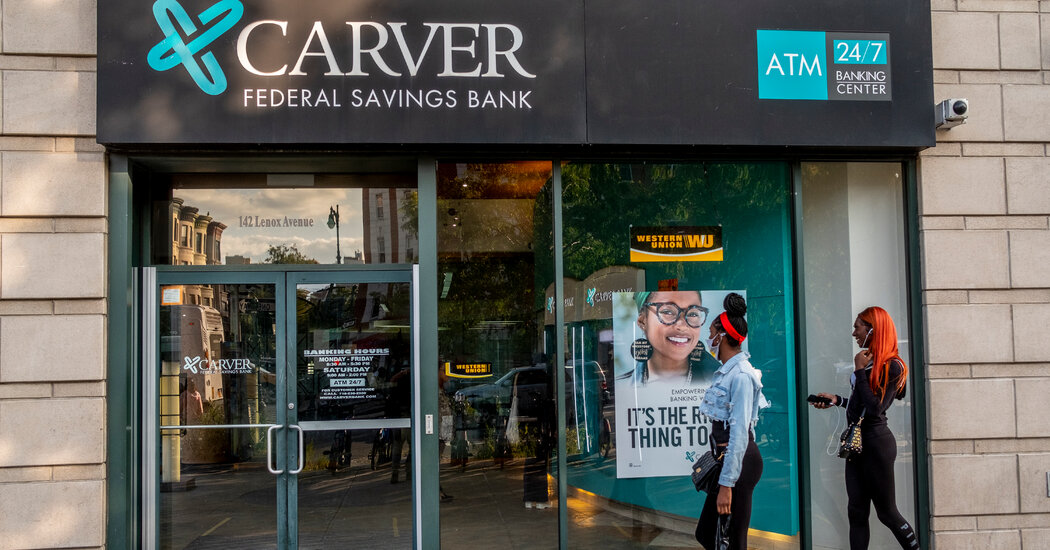 Four years before this summer of unrest in New York City, I attended the protests after Alton Sterling and Philando Castile were shot and killed by police officers that July.

I remember a day spent drifting among a crowd of anguished protesters in Washington Square Park. I remember that the dissertation I was finishing, about finance, felt remote. On its face, little of what I was exploring seemed relevant to social justice and to helping repair imperiled communities.

But later that month, I learned about an unusual cause championed by the activist Michael Santiago Render, better known as the rapper Killer Mike: Move your money into Black-owned banks. The movement became known as #bankblack, and it grabbed my attention. In the multipronged considerations of how to make America more equitable, could banking, which has so long been at the heart of the problem, actually be part of the solution?

As an article in the magazine Black Enterprise recently argued, “All issues affecting our community, from health care to police brutality to voter suppression and beyond, revolve around economics.”

Distressed groups — whether Black urbanites or white, rural shopkeepers — have long striven, unevenly, for economic self-sufficiency as a means of mobility. Typically, Wall Street-centered firms haven’t had their backs. But, in many cases, smaller banks have.

If you want to help minority-owned businesses, the first best thing is to shop local. But there’s a next best thing, which is to move your deposits into Black-owned banks or community banks in general.

A couple of blocks from my Brooklyn apartment — about the same distance from me as the nearest Bank of America branch — is a Carver Federal Savings. Carver’s roughly $650 million in total assets make it less than one-tenth of 1 percent the size of Bank of America.

Named after the pioneering Black scientist George Washington Carver, the bank was founded in 1948 with an explicit mandate to help African-American individuals and businesses get better access to the financial system. It is among the roughly 1,000 government-recognized Community Development Financial Institutions dedicated to economically underserved areas. These financial institutions are for-profit, but their mission is community revitalization.

Because of their structure, small banks have become the most reliable source of financial services for minority-owned, female-owned and rural businesses. Relative to large banks, they place more emphasis on personal relationships, collecting what economists refer to as “soft information.” While small banks also use the sophisticated algorithms that big banks use to price loans, they succeed by relying on their deep knowledge of their local ecosystem, and using that knowledge to make smart lending decisions.

As a result, banks with under $10 billion in assets (each less than 1 percent of the size of Bank of America) collectively make up almost half of all lending to small businesses.

That’s why the renewed trouble for small banks during this pandemic recession spells trouble for the small and minority businesses that they serve. We have yet to see any bank failures, big or small, directly stemming from the pandemic. That’s largely because the government, through the CARES Act’s forbearance provisions, has nudged banks, and in some cases forced them, to pause collecting interest on many federally backed mortgages.

But only for now. Once that temporary relief ends and regular payment schedules resume, we might see a wave of defaults. Bank failures also tend to lag crises. Only 25 banks failed in 2008; 157 failed in 2010.

If there is a wave of small bank failures, the macroeconomic fallout will be contained because these modest institutions are a relatively small share of the market. But big banks can’t be relied on to fill the gap in small-business lending. According to a 2017 paper by the National Bureau of Economic Research, the nation’s top banks cut their small-business lending in half after the Great Recession. (And it’s tough enough out there already: Yelp estimates that 60 percent of closed businesses on its platform aren’t expected to reopen.)

If you live in a neighborhood or small town with only one small bank, and that bank fails or is acquired by one of the Too-Big-to-Fail giants, it’s unlikely that the new bank owner will supply your community with fresh capital. A 2019 study by Siddharth Vij showed that big banks that acquire smaller competitors in the aftermath of crises are mostly interested in capturing the deposits, not the loan portfolios, of their targets.

In short, small banks desperately need deposits — your deposits. The capital it provides is their lifeblood. And thanks to the Federal Deposit Insurance Corporation, as long as you have less than $250,000 at any one bank, your funds are fully insured.

So if you’re looking for innovative ways beyond the ballot box to be an ally, listen to the wisdom of Killer Mike: bank small and, if you can, bank Black.

Katherine Waldock, an economist, is a fellow at the Millstein Center for Global Markets and Corporate Ownership at Columbia Law.