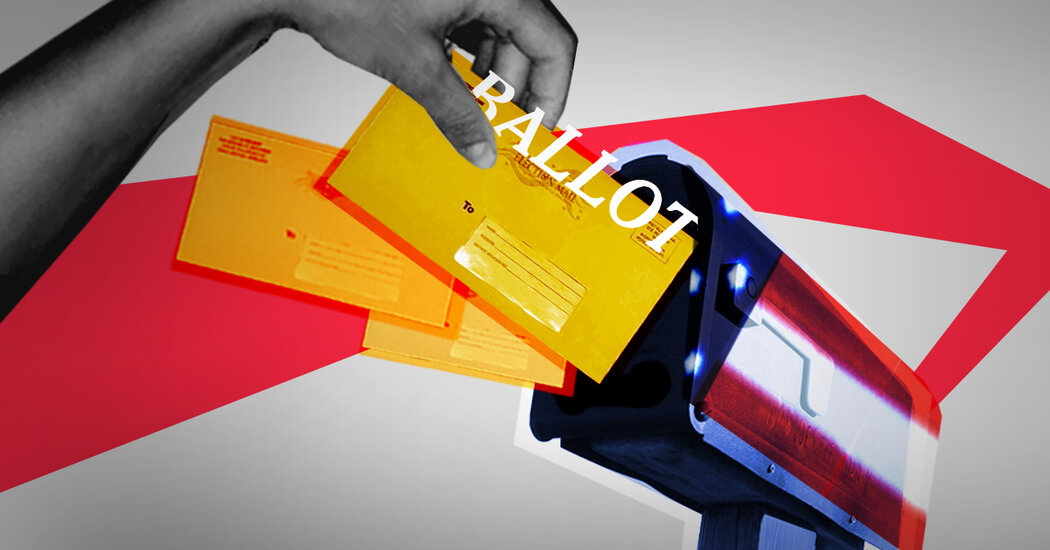 By Kassie Bracken and

The coronavirus pandemic has made voting by mail one of the election’s most contentious issues. More than 25 states have expanded access to universal mail voting, a move President Trump has repeatedly, and erroneously, equated with a fraudulent election.

Already, there have been breakdowns. Last month, a vendor error led to nearly 100,000 voters in Brooklyn, N.Y., receiving security envelopes belonging to someone else. During Michigan’s primary, more than 2,200 ballots were rejected because they hadn’t been signed by the voter.

These problems show a fragmented system straining to respond to a pandemic at record speed without needed resources. But experts say the mistakes don’t open the door to fraud: Voting by mail remains one of the most secure ways to cast a vote. A 2018 absentee ballot tampering scandal in North Carolina was notable for being one of the few widespread attempts at election fraud. Multiple studies show that in states where voting by mail is widely used, fraud cases are rare.

Unlike other states that had to quickly pivot in response to the pandemic, Michigan has had a bit of a head start: No-excuse absentee voting passed as a proposition in 2018. Still, Michigan faces many challenges as it essentially prepares for two elections, one in person and one absentee. And for the state with the slimmest margin of victory in the 2016 presidential election, many clerks in Michigan concede that they will be unable to provide definitive results on Nov. 3.

Election officials point to state laws that hinder speedy processing. According to one law, clerks cannot open the outer envelope of an absentee ballot to begin processing until 7 a.m. on Election Day. Poll workers, many of them in their 60s and 70s, are not allowed to work in shifts, despite days that can exceed 18 hours. Kim Meltzer, a Republican clerk in Clinton Township, worries about the strain of the long hours on her poll workers, saying “it negatively impacts the quality of the work that any human being can do.” She added, “What condition are they in? Couldn’t mistakes be made?”

Then there are resources. In 2020, the state received $11.2 million in federal assistance through the CARES Act. Michigan’s secretary of state, Jocelyn Benson, said she spent the money on mailing ballot applications to 7.7 million registered voters, and on technological upgrades, equipment and P.P.E. for poll workers. But she needs more money, she said, following the record turnout in the state’s August primary. “We estimate another $15 million for the state of Michigan would enable us to be fully prepared for this fall’s elections,” she said. During the primary in Lansing, the city’s Democratic clerk, Chris Swope, relied on a single high-speed scanner to process all of the ballots. He relied partly on grant money to purchase three additional $35,350 scanners and software he needed for November.

A series of election reform bills to provide additional time and support to clerks, supported by a bipartisan group of election officials, has largely stalled in the state Legislature. But some also contend there are political dynamics at play. “Do partisan politics play a role? Yes, in everything. So for sure,” said Ms. Meltzer.

What You Need to Know About Voting

Republican state Senator Ruth Johnson worries that some changes to expand absentee voting (including Ms. Benson’s unsolicited ballot application mailing) “open the door on both sides for operatives who will cheat,” a largely unsupported narrative. Still, in January, Ms. Johnson, a former secretary of state, drafted a bill to allow the largest precincts one extra day to open envelopes; it finally passed both chambers in late September. On Tuesday, Ms. Benson called it “a step in the right direction,” but cautioned it did not change the statewide estimate of results being announced the Friday after Election Day.

Election experts worry less about cheating and more about an increased potential for rejected ballots and disenfranchisement. David Becker, executive director at the Center for Election Innovation and Research, said “hand-marked ballots have had higher rates of mismarks” that lead to problems with under- and over-voting. In general, he said, this tends to impact infrequent rather than frequent voters, who are typically “whiter, wealthier and older.”

An uptick in ballot rejections could increase the likelihood of lawsuits in an already litigious landscape. According to the Stanford-M.I.T. Healthy Elections Project, more than 40 states have active lawsuits regarding laws and policies around voting by mail, including in Wisconsin, Pennsylvania and Ohio — states crucial to each candidate’s path to the White House.

This all adds up to the possibility that Nov. 3 could resemble the 2000 election, when the president wasn’t determined on election night, but weeks later, in a Supreme Court ruling.