In the aftermath of Donald Trump’s 2016 election victory, analysts fiercely debated the role of the approximately six million voters who supported President Barack Obama in 2012 but shifted their support to Mr. Trump in 2016. Democratic strategists also had to worry about their future behavior: Was 2016 a temporary blip or were these voters gone forever? With newly available data from the Cooperative Congressional Election Study survey, the largest publicly-available election survey, we can now analyze what happened with these Obama-Trump voters in 2018 and what that might portend for Mr. Trump’s re-election campaign.

To understand the potential ramifications of Obama-Trump voters in 2020, it’s worth understanding how they voted in 2018. Among those who voted, three-quarters stuck with the Republican Party. But Democrats did win back about one-fifth of the Obama-Trump group in 2018, which would amount to a net swing of about 1.5 million votes. While the idiosyncratic governing style of Mr. Trump may have been one key factor in bringing Obama-Trump voters back into the Democratic fold, it wasn’t the only reason. It’s true that most Obama-Trump voters who stuck with the Republican Party in 2018 strongly approved of the job Mr. Trump was doing as president, but interestingly even half of those who flipped back to the Democratic side at least somewhat approved of Mr. Trump. Democrats won back a significant share of Obama-Trump voters not because those voters disliked Mr. Trump, but in spite of the fact that many actually approved of him.

Instead, these voters appeared to be drawn back toward the Democrats by some of the party’s bread-and butter-issues, and in spite of others. On issues like gun control, health care and the environment, these voters look remarkably like the Democratic Party’s base — those who voted for Obama in 2012, Hillary Clinton in 2016 and a Democratic House candidate in 2018. Eighty-four percent of Obama-Trump voters who voted for Democratic House candidates in 2018 want to ban assault rifles, compared to 92 percent of the Democratic base. By contrast, 57 percent of Obama-Trump voters who stayed with Republicans in 2018 support an assault weapons ban (which has far less support among the Republican base).

Medicare for all is surprisingly popular among all Obama-Trump voters, but especially those who voted for Democrats in 2018. Eighty-three percent of those who switched back to the Democratic Party in 2018 support Medicare for all, nearly as high as the 93 percent support the policy achieves among the most solidly blue Democratic voting bloc.

These patterns show that Democrats can win back Obama-Trump voters by focusing on issues that also appeal to their base. Another such issue is climate change. Seventy-three percent of Obama-Trump voters who came back to the Democratic Party in 2018 oppose the president’s decision to withdraw from the Paris Climate Agreement; among those who stayed with the Republican Party in 2018, 74 percent support that decision.

Notably, the Obama-Trump voters who returned to the Democratic Party in 2018 look less like the Democratic Party base in other ways. A majority support building a border wall and Mr. Trump’s ban on immigration from predominantly Muslim countries. At the same time, two-thirds of these voters support Deferred Action for Childhood Arrivals, which allows undocumented immigrants brought to the United States as children to receive deferred action on deportation.

They also have less progressive attitudes when it comes to race and gender. For example, less than half of these voters agree that whites have advantages because of the color of their skin, and an even smaller share think that feminists are making reasonable demands of men. These are your classic cross-pressured voters, aligned with Democrats on many policies that are part of the progressive wish list but likely to be turned off by the party’s rhetoric on identity politics.

Support a ban of assault weapons

Support Medicare for all

immigrants brought to U.S. as children ) 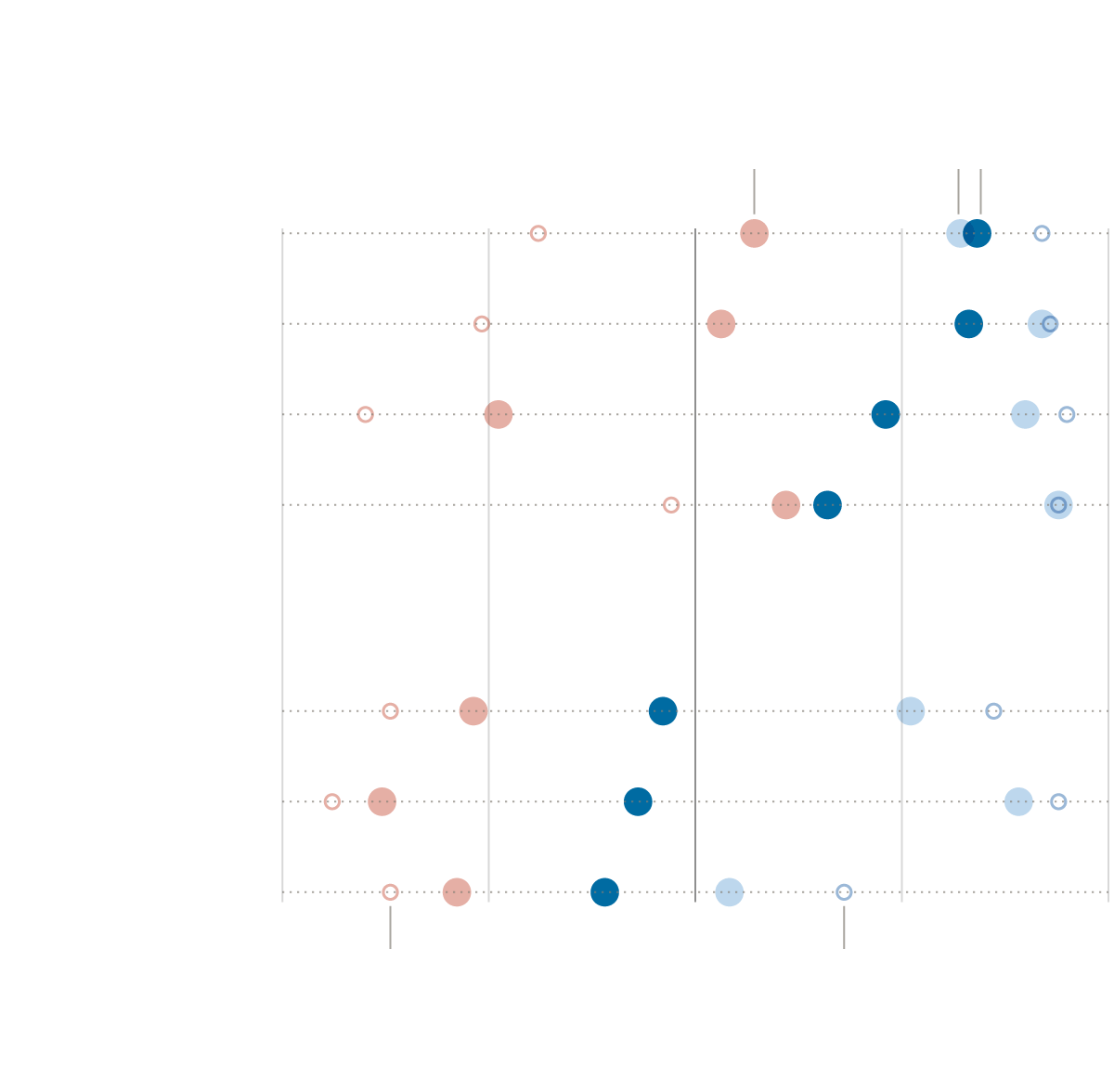 Support a ban of

Support Medicare for all

brought to U.S. as children)

Agree that whites have

Agree that feminists are

Of course, another important group that will play a role in the 2020 election are the 2012 Obama voters who did not vote in 2016, the missing Obama millions. In 2018, Democrats regained some support among this group as well. About one-third turned out for the 2018 election, and Democrats won them 4 to 1. These voters looks much more like the Obama base than the Obama-Trump voters who supported Democrats in 2018. These remobilized Obama-nonvoters not only share similar views with the Democratic Party’s base on health care, gun control and the environment, but they also have similar views on immigration and share progressive views on race and gender relations.

The story of Democratic success in winning back the House in 2018 seems to be driven by two patterns — the ability to win back some cross-pressured members of the Obama coalition who voted for Trump in 2016, while also remobilizing former Obama voters who failed to show up at the polls two years earlier. Progressive economic and climate views unite these two coalitions, while the groups are more divided when it comes to racial justice and gender equity. Both Obama-nonvoter-Democrats (92 percent) and Obama-Trump-Democrats (88 percent) support a $12 minimum wage and a millionaire’s tax (92 percent and 79 percent).

Following the 2016 presidential election, the Wesleyan Media Project reported that Mrs. Clinton’s campaign aired fewer issue-based ads than any other presidential candidate since they started collecting the data in 2000. Perhaps Democrats learned a lesson from 2016: In 2018 the Wesleyan researchers found that Democratic campaign ads were “laser focused” on issues, especially health care, which was the focus of more than half of the advertisements run by Democratic candidates. Our data suggests that this approach helped bring many Obama-Trump voters back into the Democratic column while also remobilizing many Obama voters to turn out and vote Democratic again in the midterm election.

Though there is a temptation to focus on Mr. Trump’s personality, if Democrats continue to learn from these elections, they will focus this year’s campaign on their plans to address issues like health care, wages and the environment, lest the Obama-Trump voters become Obama-Trump-Trump voters in 2020.

Sean McElwee (@SeanMcElwee) is the executive director of Data for Progress. Brian F. Schaffner (@b_schaffner) is a political scientist at Tufts.