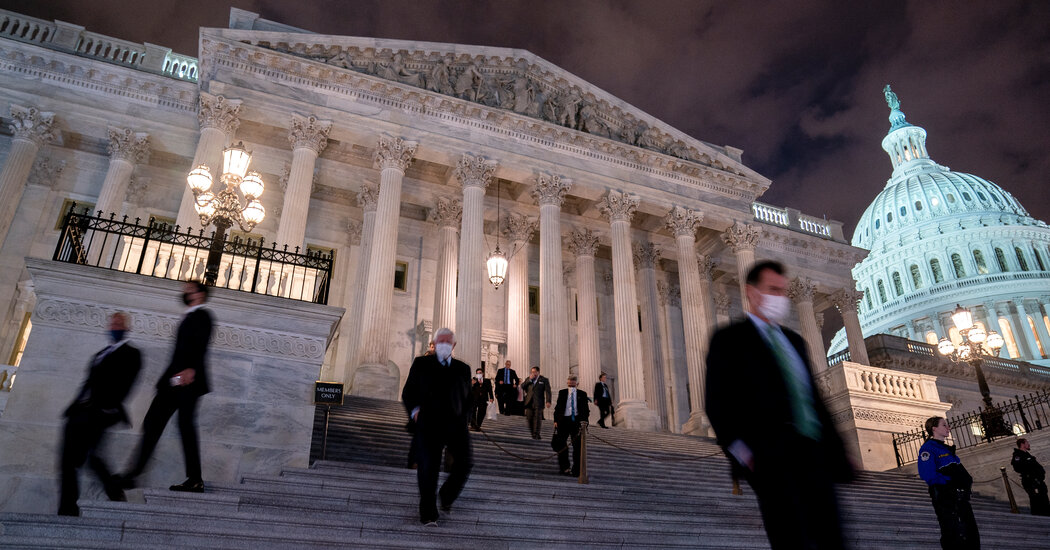 Once again, a last-minute congressional deal prevented the U.S. government from defaulting for the first time ever on its financial obligations. Congress passed a debt ceiling increase of $2.5 trillion on Dec. 14, a day before Treasury Secretary Janet Yellen’s deadline to address the federal debt limit.

Without that increase — passed largely along party lines — the government would not have been able to borrow the money necessary to meet its obligations, threatening a crisis that Ms. Yellen said could “eviscerate” the economic recovery. The threat has now been pushed out for another year or so, when Congress will likely have to revisit the issue.

This brinkmanship over the full faith and credit of the United States needs to end. Congress must stop these short-term solutions and take steps to ensure the debt limit cannot be used as a tool of partisan politics. Bipartisan cooperation is necessary; both parties are responsible for contributing to our national debt and should be equally committed to taking meaningful action to address it.

How to achieve this? First and foremost, Congress should start by increasing the debt limit to ensure all past financial commitments are covered.

Next, Congress should commit that all future legislation estimated to increase the national debt by the Congressional Budget Office or the Joint Committee on Taxation will include language increasing the debt limit accordingly. This approach would ensure that both parties are accountable for addressing the debt incurred by their policies — whether tax cuts or government programs.

Often the debt limit is misconstrued as enlarging the nation’s financial commitments or authorizing new spending. This is incorrect: The debt limit refers to the maximum amount of debt that Congress allows the Treasury Department to issue, permitting the government to continue to fund financial obligations that have already been authorized and allocated.

Debt limit legislation, however, places a cap on funding these obligations. If the Treasury Department is unable to issue new debt, the government will be forced to default on financial commitments, jeopardizing the full faith and credit of the United States globally. This is why past Treasury secretaries of both political parties have gone to such lengths to protect the economy when the nation has been allowed to approach the debt limit.

Our first Treasury secretary and the founder of the Bank of New York, Alexander Hamilton, recognized the critical nature of American sovereign debt to our national economy. He acted on this understanding by forming the first central bank to absorb Revolutionary War-era debt in 1791.

Today, neither of the two major political parties wants to risk the political fallout of raising the debt ceiling, leading to the impasse we’ve seen over the past few months. But even short of default, legislative delays in raising the debt limit have created significant economic harm. Past crises have produced uncertainty in the bond markets, placed upward pressure on interest rates and cost the taxpayers a significant amount of money.

A 2011 standoff in Congress over the debt ceiling even prompted Standard & Poor’s to downgrade the credit rating of the United States from its triple-A level, which has cost taxpayers more than a billion dollars and led to substantially increased borrowing costs on Treasury-issued securities.

In September, a bipartisan group of six former Treasury secretaries set aside its political differences to urge Congress to “move swiftly to initiate and complete a viable legislative process necessary to raise the debt limit.” Were Hamilton alive today, he, too, would have signed such a letter. Congress should take this advice to heart. Rather than allow our government to risk near default or a credit downgrade, it should take bipartisan action to avoid the destabilizing effects of another debt-limit showdown.

The rest of the world has long recognized the soundness of the credit of the United States. As we continue to grapple with the lasting effects and uncertainty that Covid-19 has unleashed on global markets, we cannot leave something as important as our national credit up to chance.

Todd Gibbons is the chief executive of BNY Mellon.