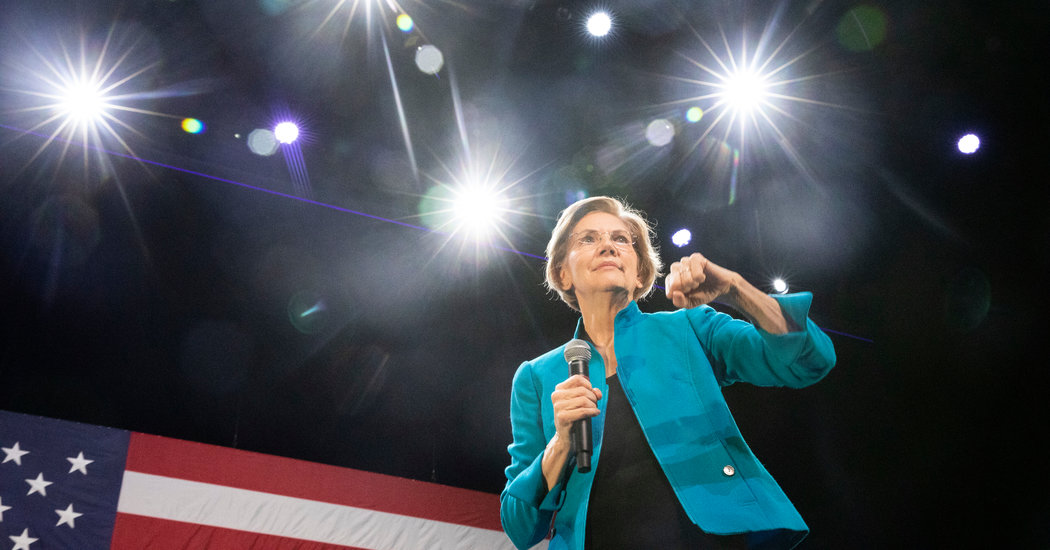 DAVENPORT, Iowa — The voter asked Senator Elizabeth Warren of Massachusetts the question on many Iowans’ minds: What did she have to offer besides her litany of policy proposals?

At first, Ms. Warren responded with a story about her working-class upbringing, saying she intimately understood a family’s day-to-day financial struggles. Then she gave a second answer, a more direct argument for her ability to beat President Trump.

“I’m the only person who will be on the debate stage who’s beaten a popular incumbent Republican anytime in the last 25 years,” Ms. Warren said. “In other words, I know how to fight, I know how to win, and that’s what I plan to do.”

The response, given at a rally in Davenport on Sunday, was a rare foray into horse-race politics from a candidate who has dismissed the importance of polls, rarely reads news coverage about herself and detests Beltway punditry. But it was part of a quiet recognition among her advisers and surrogates that, less than one month before the Iowa caucuses, Ms. Warren is being damaged by criticism and pressure from both moderates and liberals within the Democratic Party, whose doubts about her have fueled concerns about her ability to win.

These worries have also filtered down to voters, who, in more than two dozen interviews during Ms. Warren’s two most recent trips to Iowa, have expressed a growing fear that her candidacy is neither satisfying nor uniting the political factions in the party.

“It’s been a problem,” said Peter Leo, the chairman of Iowa’s Carroll County Democrats, who has endorsed Ms. Warren. “She’s getting hit from the left and the right.”

Ms. Warren’s conundrum is tied to the all-important notion of “electability,” the vague and sometimes discriminatory concept that has become paramount to Democratic voters who are motivated by defeating Mr. Trump.

When Ms. Warren’s campaign was riding high in the summer and early fall, the energy around her ideas was an implicit message to both liberals and moderates: She was the one who could win. But after a series of attacks, beginning on health care policy, she has lost ground as some voters have retreated to their ideological corners: the left-wing base that has rallied around Senator Bernie Sanders of Vermont, and the moderate group of Democrats who have largely backed former Vice President Joseph R. Biden Jr. or former Mayor Pete Buttigieg of South Bend, Ind.

It has created a self-fulfilling cycle that Ms. Warren is now trying to break.

Wallace Watson, a 52-year-old who attended her rally over the weekend in Dubuque, Iowa, said he decided to support Ms. Warren months ago because he saw her as the only candidate who could energize both voters who backed Mr. Sanders in 2016 and those who supported Hillary Clinton, the party’s nominee. In recent months, however, he admitted that his faith in Ms. Warren had been tested.

“I think she has long-term viability, but it’s unfortunate that she has had press coverage in the last months of the year that has seemed to lessen her impact,” Mr. Watson said. “She needs to step up her campaign and make herself a viable candidate again. I’m hopeful she will.”

Ms. Warren’s campaign did not respond to a request for comment for this story. But in private conversations, her advisers acknowledge that this ideological squeeze is similar to one that doomed earlier candidates like former Representative Beto O’Rourke of Texas, Senator Kirsten Gillibrand of New York and Senator Kamala Harris of California. But unlike those candidates, who often made grand pivots in order to appease both sides, Ms. Warren is placing her bet on authenticity and hoping voters will reward her for being consistent.

But she is still making minor tweaks to her strategy. She has appeared on more national television programs in recent days, including a rare appearance on the Sunday political talk show circuit. Adam Green, who leads the Progressive Change Campaign Committee and has advised Ms. Warren, said to expect her to “make the case for electability” against Mr. Trump in the coming month, aimed at “scared progressives” who are “tentatively parked with others like Biden.”

The campaign has also amassed a roster of energetic and potentially influential surrogates, including Julián Castro, the former cabinet secretary and presidential candidate, Representatives Ayanna S. Pressley of Massachusetts and Katie Porter of California, and a collective of activists called “Black Womxn For,” all of whom are set to descend on Iowa in the coming weeks.

These surrogates may go on the offensive in ways Ms. Warren has resisted. At their joint rally in Brooklyn on Tuesday, it was Mr. Castro — not Ms. Warren — who made the most explicit case for why she was better suited than her primary opponents to beat Mr. Trump.

Ms. Warren’s campaign has avoided setting expectations for its Iowa finish. But Sean McElwee, whose think tank, Data for Progress, has worked closely with Ms. Warren’s campaign, said he thought she probably needed a first- or second-place finish in Iowa to unlock her numbers elsewhere — and at a minimum, she must beat Mr. Sanders.

It will be an electoral tightrope walk of the highest order, as evidenced by the way the debate about Ms. Warren’s health care plan consumed the final months of 2019. It started with the race’s moderates, who pressured Ms. Warren into providing additional details about how she planned to pay for and transition to a “Medicare for all” system. When those details diverged from the outline in Mr. Sanders’s bill, some members of the party’s left flank accused her of political betrayal.

Other issues have prompted a backlash against Ms. Warren in the early days of this year. After Mr. Trump ordered the killing of Maj. Gen. Qassim Suleimani, one of Iran’s top military commanders, Ms. Warren issued a statement that was rejected by some on the party’s left, who said she had not sufficiently embraced an antiwar framework like that of Mr. Sanders. After she released a second statement, she faced criticism for not denouncing Mr. Suleimani in sufficiently harsh terms, even as other candidates who also adjusted their public remarks — including Mr. Buttigieg — escaped scrutiny.

Last week, Ms. Warren surprised some of her own supporters by embracing the updated trade deal between the United States, Mexico and Canada, which was negotiated by Mr. Trump to replace the North American Free Trade Agreement, saying it created some market stability for farmers. It was also a rare break between her and Mr. Sanders, who argued the bill would not stop the outsourcing of jobs and had lax environmental regulations.

The Sunrise Movement, the nationwide group of young climate activists, said Ms. Warren’s support for the agreement “undermines her commitments to the Green New Deal.” Prominent online supporters of Ms. Warren, including leaders at the Working Families Party, the progressive group that endorsed her in September, boosted tweets about being “heartbroken” by Ms. Warren’s decision.

In his western Iowa county, Mr. Leo said, Ms. Warren had not lost support to Mr. Sanders, but to moderates like Mr. Biden, Mr. Buttigieg and Senator Amy Klobuchar of Minnesota. He believes the Warren campaign should focus on persuading moderate Democrats who may have abandoned it over electability fears.

Mr. McElwee, for his part, criticized the analysis of Ms. Warren’s general election prospects, including a poll released by The New York Times in the fall. He said it helped create a narrative that Ms. Warren was a weak candidate against Mr. Trump, resulting in a campaign that is more reliant on good results in Iowa than ever before.

At the same time, he cautioned Ms. Warren’s campaign against outsourcing the all-important electability argument to surrogates and outsiders.

“It’s been baffling,” Mr. McElwee said of the campaign’s response to being attacked from both sides. “They haven’t really contested the question.”