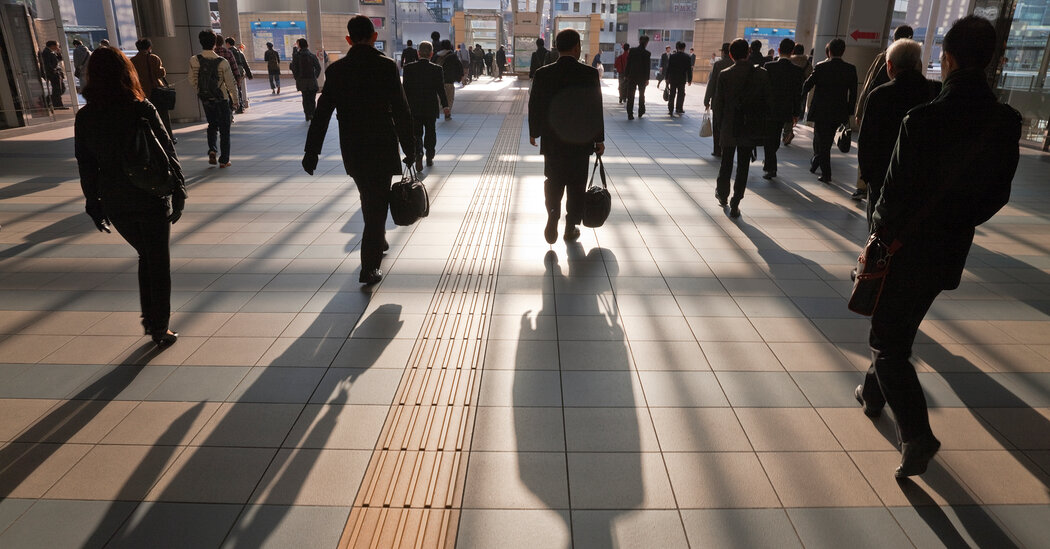 Last week’s employment report was puzzling. The Bureau of Labor Statistics carries out two separate surveys, one of employers and another of households; we normally expect the two to paint a similar picture. This time, not so much.

The employer survey was, to use the technical term, meh — 210,000 jobs added, a respectable number but not what many had hoped for. The household survey, however, was terrific; in particular, the employment rate among prime-age adults, a key measure of labor market health, is beginning to approach prepandemic levels.

Well, we shouldn’t make too much of the apparent inconsistencies in the report. Noisy data happens, and overall the economic picture looks pretty good — indeed, in many ways this looks like the best economic recovery in many decades.

Yet consumers appear to be feeling very downbeat — or at least that’s what they tell surveys like the famous Michigan Survey of Consumers. And this perception of a bad economy is clearly weighing on President Biden’s approval rating. Which raises the question: Are consumers right? Is this a bad economy despite data showing it as very good? And if it really isn’t a bad economy, why does the public say it is?

Just to be clear, I genuinely want to know the answer to these questions. I don’t think it’s a crude case of “people are being lied to by the corporate media,” although if you ask me, it’s silly when people in the media get all huffy over any suggestion that how they report on the economy has an influence on public perceptions. (If it doesn’t, why do they bother?)

So what is going on? Let’s start with the obvious culprit, inflation, which is indeed running hotter than it has for decades.

Rising prices have certainly eroded many workers’ wage gains, although real personal income per capita is still above its prepandemic level even though the government is no longer handing out lots of money. And my sense is that inflation has a corrosive effect on confidence even when incomes are keeping up, because it creates the perception that things are out of control.

That said, surveys about inflation also illustrate the point that when you talk to consumers, the questions they answer may not be the ones you thought you were asking. It’s a longstanding observation — almost a running joke — that the “expected inflation” number from the Michigan Surveys is, in practice, basically the price of gasoline.

So what question are people really answering when asked about the state of the economy? One clue is that there’s an incredible amount of partisan skew in the responses. Republicans say, bizarrely, that current economic conditions are much worse than they were in March 2009, when the economy was losing 800,000 jobs a month.

Another clue is that you get very different answers when you ask people “How are you doing?” rather than “How is the economy doing?” The Langer Consumer Confidence Index asks people separately about the national economy — where their assessment is dismal — and about their personal financial situation, where their rating is high by historical standards. The Michigan Surveys don’t ask quite the same questions, but they do ask people how their current financial situation compares with five years earlier; 63 percent say they’re better off, the same number as in September 1984, just before Ronald Reagan won an electoral landslide with claims that it was “morning in America.”

Aside from looking at what people say, surely it makes sense to look at what they do. If consumers are really as depressed as the sentiment numbers say, why are retail sales running so high?

And if we turn our attention from consumers to businesses, what we see is a huge surge in capital expenditures. That is, businesses are investing as if they see a booming economy and expect the boom to continue.

In short, the public’s highly negative assessment of the economy is at odds with every other indicator I can think of. Again, what’s going on?

As I said, part of the answer is probably that inflation unnerves people even when their incomes are keeping up. This may be especially true when there are big increases in the cost of filling one’s gas tank, a cost that has psychological salience far larger than its 4 percent weight in the Consumer Price Index.

Partisanship is also definitely a factor. Two-thirds of Republicans believe that the 2020 election was stolen; how much of a stretch is it for them also to believe that the Biden economy is terrible, whatever their personal experience?

Finally, as I also said, it’s implausible to assert that the tone of media coverage is irrelevant. It’s not even necessarily a partisan thing. My world is full of economic commentators who have spent years eager to moralize about the evils of inflation and who were bitterly disappointed when their hoped-for disaster failed to materialize a decade ago. Now they have their chance, and they’re surely having some effect on public perceptions.

So it’s important to keep perspective. This is actually a very good economy, albeit with some problems. Don’t let the doomsayers tell you otherwise.