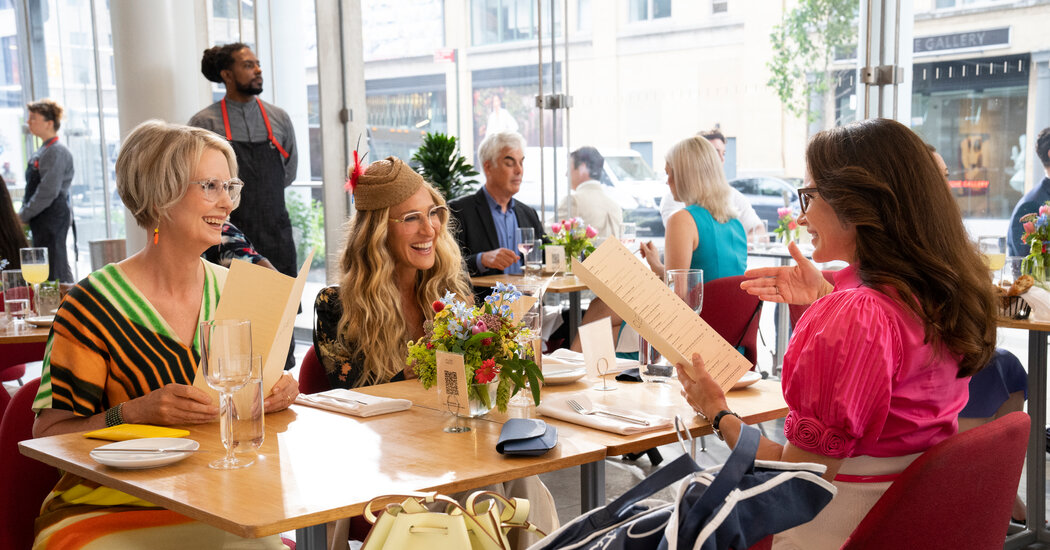 Here’s how the “Sex and the City” revival wrote out Kim Cattrall, who has been publicly critical of the star, Sarah Jessica Parker. Plus: A roundup of the best reviews of “And Just Like That.”

So is Samantha just a handbag now?

Early Thursday morning, the first two episodes of “And Just Like That” arrived on HBO Max, heralding the click-clack return of the “Sex and the City” universe, the first new installment since the misbegotten 2010 film “Sex and the City 2.” Kim Cattrall had already departed the franchise, declining to return for a planned third film. Trailers for this new series had failed to explain the absence of her character, Samantha. Fans noted a ladies-who-lunch scene, in which the chair normally reserved for Samantha is instead occupied by a blond bucket purse and an Oscar de la Renta garment bag. Cold.

The first moments of the first episode, which checks in on Sarah Jessica Parker’s Carrie, Cynthia Nixon’s Miranda and Kristin Davis’s Charlotte in their mid-50s, quickly explain Samantha’s disappearance. So if you can tolerate a small spoiler, read on. And if you can stomach a much, much bigger one, read even further.

While waiting for their table, the women run into Bitsy von Muffling (a beloved character played by the equally beloved Julie Halston). When Bitsy asks after Samantha, they reveal that Samantha has moved to London for work. (Is this a sneaky nod to reality? Cattrall herself spends a lot of time on the London stage.)

“Sexy sirens in their 60s are still viable over there,” Bitsy says approvingly.

In a post-lunch scene, Carrie and Miranda discuss the estrangement. The state of the book business meant that Carrie no longer needed a personal publicist. And when she let Samantha go professionally, Samantha fired her as a friend. All of the women have called and texted, but Samantha has never responded.

This conversation seems to allude, elliptically, to the rumored real-life feud between Parker and Cattrall. Elle has an exhaustive timeline of it, which begins in the 2000s with some veiled comments about pay disparities, continues through the 2010s when Cattrall declines to do the third movie and climaxes in 2018, in the most 2018 way imaginable — with some extremely heated Instagram exchanges.

“I always thought the four of us would be friends forever,” Carrie says wistfully. Oh well. (Somewhat less charitably, she also says: “I thought I was more to her than an ATM.”)

Without Samantha’s libertine ways, this new version has a more somber feel, underscored by a big twist that comes at the end of the first episode. In an article previewing the new series, the showrunner Michael Patrick King told The Times, “Nobody’s dead. Nobody.” That’s only true for about half an hour.

The ‘Sex and the City’ Universe

The sprawling franchise revolutionized how women were portrayed on the screen. And the show isn’t over yet.

That scrapped third movie was rumored to have begun with Carrie’s husband Big (Chris Noth) having a heart attack in the shower. Noth denied it at the time, but that’s how the first episode ends. Well, technically the heart attack is shower-adjacent, but still. Samantha sends an elegant casket spray to the funeral, signaling a rapprochement. Or it could be that associating the character with a coffin indicates something darker.

There are other changes, too, like the inclusion of four new characters of color played by Sarita Choudhury, Nicole Ari Parker, Karen Pittman and Sara Ramírez. The first episodes introduce those latter three characters; Choudhury’s high-end real estate agent arrives later. (And while Willie Garson’s Stanford Blatch is in the first several episodes, Garson died during filming, so the creators have devised a brisk exit.) Carrie co-hosts a podcast now. Miranda has traded corporate law for human rights work. Charlotte is pretty much still Charlotte. The heels? Quite high. The reviews? Pretty mixed.

Here are some of the most insightful, along with other coverage of note about “And Just Like That” and the legacy of “Sex and the City.”

‘Review: “And Just Like That,” It All Went Wrong’ (The New York Times)

In a muted review, James Poniewozik argues that the revival is really two shows, which don’t seem especially well integrated. “One, which tries to grow with the women as they navigate their 50s and mortality, is a downer,” he writes, “but it takes risks and in moments is very good. The other, which tries to update its sassy turn-of-the-century sensibility for an era of diversity, is painful.”

‘“And Just Like That” is “Sex and the City” for 2021: A bloated, laugh-free comedy about grief’ (The Washington Post)

The Washington Post ran a riotously negative review of the original “Sex and the City.” (See below.) And Inkoo Kang hates the revival, too, even as her analysis avoids the misogyny of that earlier critique. “This year has been a bummer, and so is the sequel series,” she writes. The zippy, intimate, charmingly featherlight landmark HBO series of yore has been replaced by yet another bloated streaming-service grief-com, the latest piece of intellectual property back in zombie form to generate headlines, pique nostalgia and ultimately disappoint us.”

Richard Lawson, a devoted fan of the franchise, questions the tone of the series and the ways its high-gloss aesthetic chafes against its new seriousness. But he still finds reason to hope. “I have faith that the show’s eagerness to prove its cultural savvy will eventually subside into something a bit less flustered and antic,” he writes. “And that the show’s somber beginnings will give way to the playful moods of yore.”

Gwen Ihnat doesn’t find much to praise in the pilot episode of the series. But as the rare woman in her 50s to review the show, she argues for why it’s necessary. “It’s also an interesting, underlooked age,” she writes of her mid-50s, “and women like me who spent the formative years of our adulthood with Carrie et al. are likely looking forward to processing the autumn of life with these familiar faces (also, to get some much-needed fashion inspiration).”

‘“And Just Like That”: The Shoe Must Go On’ (The New York Times)

This preview piece visits the Brooklyn set of the “Sex and the City” revival and talks to several of its creators and cast members, exploring what might stay the same and what will be different, and asking: “Can a show adapt to changed characters and changing times while still supplying what fans loved about the original?”

‘And Just Like That … Carrie’s Back! Sarah Jessica Parker Opens Up About a Grand Return’ (Vogue)

In a cover story for Vogue, Naomi Fry interviews Parker (exquisitely dressed, of course) about returning to her most famous role. Parker is particularly articulate when discussing the culture around women and age. “It almost feels as if people don’t want us to be perfectly OK with where we are, as if they almost enjoy us being pained by who we are today, whether we choose to age naturally and not look perfect, or whether you do something if that makes you feel better,” she says. “I know what I look like. I have no choice. What am I going to do about it? Stop aging? Disappear?”

‘We Have an Exclusive Look at the Costumes From And Just Like That, and Carrie’s in Another Tulle Skirt’ (InStyle)

InStyle has a chat Molly Rogers and Danny Santiago, who assisted Patricia Field on the original and design the costumes for the reboot, about the show’s high-low (OK, mostly high) aesthetic. And Harper’s Bazaar has a surprisingly in-depth — and shoppable — interview with Sherri Laurence, who leads the makeup team. When it comes to blush, are you a Carrie, a Charlotte or a Miranda?

‘Difficult Women: How “Sex and the City” lost its good name’ (The New Yorker)

Emily Nussbaum’s still indispensable essay places “Sex and the City” firmly within the prestige TV tradition and examines why critics have since downgraded its innovations and achievements. (Hint: Because it was about girl stuff.) “High-feminine instead of fetishistically masculine, glittery rather than gritty, and daring in its conception of character, ‘Sex and the City’ was a brilliant and, in certain ways, radical show,” she writes.

“Sex and the City” wasn’t always beloved even at first, particularly by the men who reviewed it. Amanda Arnold’s article in The Cut compiles some of the worst, most wildly sexist takes. Here’s a gem from The Washington Post (did they not have editors back then?): “Sarah Jessica Parker has an in-your-face face. In her new HBO comedy series, ‘Sex and the City,’ she always seems to be thrusting it forward. She’s in love with the camera. Unfortunately, it’s unrequited.”

‘True Tales of “Sex and the City”’ (The New York Times)

To mark the show’s 20th anniversary in 2018, The Times compiled stories from readers discuss the impact that “Sex and the City” had on their lives, for better and for worse. Steven Kurutz assembled an oral history of New York life in the ’90s and what that meant for the writer Candace Bushnell, who wrote the columns that were adapted for “Sex and the City.”