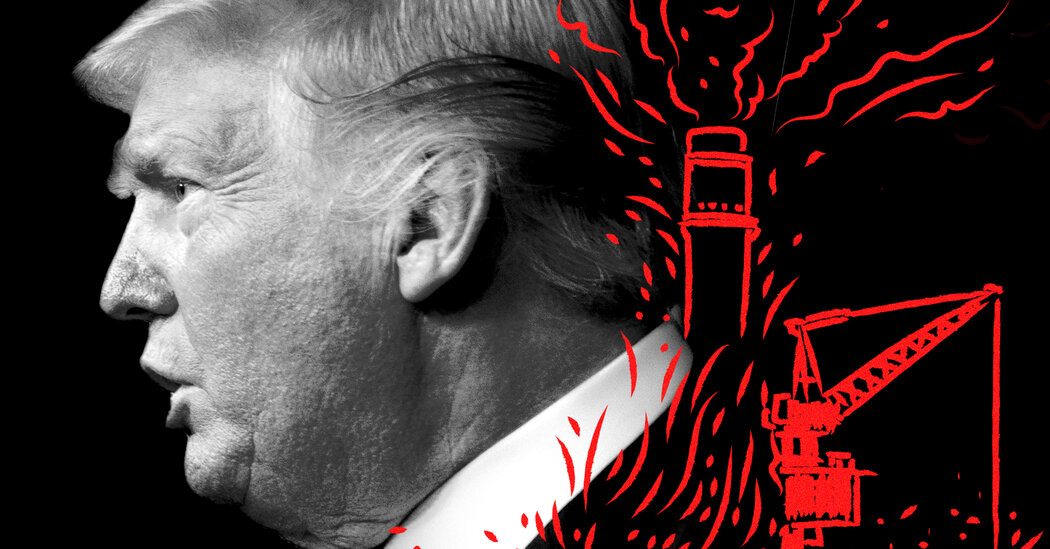 That the Interior Department has now blessed oil and gas drilling in the coastal plain of the Arctic National Wildlife Refuge comes as no surprise. It was a foregone conclusion once Lisa Murkowski, in 2017, persuaded her Senate colleagues to authorize drilling in the refuge as part of a tax bill, ending protections that have been in place since the Eisenhower administration.

Still, given the refuge’s obvious importance to the abundant wildlife there, its talismanic significance to the environmental community and the climate-wrecking potential of the oil that lies underneath it, the announcement came as one more disheartening blow from the Trump administration. The administration’s contempt for public lands is equaled only by President Trump’s fealty to the country’s fossil fuel interests and by his determination to obliterate anything President Barack Obama did to preserve open space, ensure cleaner air and water and reduce global warming gases.

The courts have already intervened to limit some of the damage; a new president, with a favorable Congress, can do much more. This will take patience and discipline. Mr. Trump has left the country’s environmental policies in wreckage. Most of that destruction has been in service of a misbegotten strategy of “energy dominance” that emphasized the production of more and more fossil fuels at a time when mainstream science — and the fires, floods, hurricanes and other evidence before our eyes — insisted that what we need is less of them.

The biggest casualties were the three programs that formed the basis of Mr. Obama’s promise at the 2015 Paris climate meeting to substantially reduce America’s greenhouse gases: rules reducing carbon dioxide emissions from power plants, those reducing emissions of methane, another potent greenhouse gas, from oil and gas operations; and those mandating dramatic improvements in automobile fuel efficiency.

Along the way were other sacrifices offered to the gods of fossil fuels — two national monuments in Utah established by President Bill Clinton and Mr. Obama, and millions of acres of Western lands set aside by Mr. Obama to save the endangered sage grouse. Meanwhile, bad ideas thought to be dead and buried received new life in the Oval Office: logging in hitherto protected old-growth areas of the Tongass National Forest in Alaska and a gold and silver mine in the headwaters of America’s richest fishery, Bristol Bay.

The damage this year, though considerable, was less visible in the shadows of a global pandemic. Perversely, despite emerging evidence of a link between dirty air and deaths from Covid-19, a disease that among other things attacks the lungs, the Environmental Protection Agency voted emphatically in favor of dirty air. In April, the agency recalculated the costs and benefits of curbing mercury pollution in a way that could be used to justify weakening rules for any pollutant the fossil fuel industry deemed too costly to control. That same month, it declined to tighten regulations on emissions of tiny soot particles known as PM 2.5, which threaten the lungs — even though career scientists at the agency had overwhelmingly favored a more protective standard.

It’s hard to find encouragement in all this, though here is one positive sign often overlooked in what has been a relentless, attention-grabbing onslaught: The administration has not always received buy-in from the very industries Mr. Trump purports to help. Some are distinctly uncomfortable in his warm embrace. Automakers, for instance, wanted some relief from the Obama fuel efficiency standards, though nothing on the scale of Mr. Trump’s rollback, which dropped the target from 54 miles per gallon by 2025 to 40 miles per gallon. Indeed, in a stinging rebuke to the president, five major auto companies that control 30 percent of the market agreed this month in a separate deal with California to abide by the state’s stricter mileage standards, which are very close to Mr. Obama’s.

Similarly, some of the big oil companies had urged the administration to keep Mr. Obama’s methane restrictions in place; having invested heavily in the idea that natural gas is a more climate-friendly fuel than coal, they feared, quite rightly, that unregulated leaks would cancel out that advantage and undermine their sales pitch. The major utilities, meanwhile, saw no great value in softer mercury rules because they had already invested heavily in the technologies that capture it.

Even the president’s efforts to romance the fishing industry fell flat. In June, Mr. Trump boasted on a trip to Maine that he had saved the state’s lobster industry by opening up the Northeast Canyons and Seamounts Marine National Monument to industrial fishing — thus adding to his fire sale of the nation’s natural heritage that his predecessor had tried to shield. The lobstermen were unimpressed. The monument is more than one hundred miles out to sea. Maine’s lobstering typically takes place within three miles of shore.

As for the Arctic refuge, the oil companies are hardly tripping over one another to bid for leases. Why should they? Demand is low, prices are low and an industry that has already begun writing down some assets as possibly unrecoverable in a climate-conscious world would undoubtedly prefer to drill in the friendlier climates of, say, West Texas. Then there’s the matter of money. Increasingly conscious of climate risk, major investment banks — including Morgan Stanley, Goldman Sachs, JP Morgan Chase, Citigroup and Wells Fargo — have promised not to finance drilling in the refuge, and, in some cases, the entire Arctic. That would seem to leave the field, and the prospect of unending negative publicity, to big outfits like Exxon and Chevron.

Litigation is virtually certain. Environmental groups and states’ attorneys general now mobilizing for court action say that the Interior Department downplayed the potential damage to wildlife and the risks to the climate of unearthing the 10 billion or so barrels the department says the refuge contains.

So far, the federal courts have not been friendly to the administration. They rejected Mr. Trump’s attempt to overturn Mr. Obama’s executive action protecting Arctic waters in the Beaufort and Chukchi seas from drilling, as well as his meddling in the Tongass, and derailed, at least for now, his plan to revive the Keystone XL oil pipeline from Canada. And the courts could still overturn Mr. Trump’s effort to repeal Mr. Obama’s monument designations.

The biggest roadblock to Mr. Trump’s vaulting anti-environment and anti-regulatory ambitions would, of course, be Joe Biden, should he win the November election and the Democrats capture the Senate. As president, Mr. Biden would have several weapons at his disposal. He could use the complex Congressional Review Act to overturn initiatives that Mr. Trump was unable to complete in time, possibly including the recent weakening of the 50-year-old National Environmental Policy Act’s regulations. And he would almost certainly seek to replace Mr. Trump’s executive orders and rules with his own, a laborious though necessary process.

And he can move forward with his own agenda. The centerpiece, as of now, would be his sprawling $2 trillion plan to tackle climate change with ambitious deadlines, a more measured approach to drilling on public lands (he’d leave the Arctic alone) and big investments in energy efficient buildings, clean fuels and clean cars.

Look closely, and there’s something else important in that massive document and in Mr. Biden’s speeches: evidence of a wholly different mind-set toward the relationship between humans and the natural world. Mr. Biden would, for instance, oppose the Alaskan gold mine, set aside nearly one-third of America’s land and water for protection, establish new monuments and national parks, move aggressively to restore the Everglades and clean up the Great Lakes. In sum: a new and welcome environmental ethic in the Oval Office.