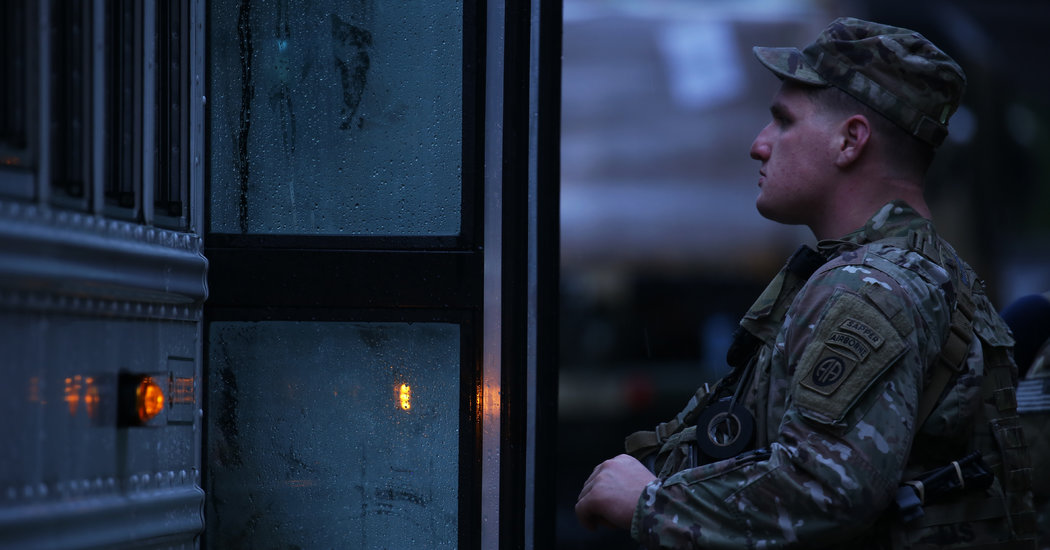 WASHINGTON — American military units stationed in Iraq and Syria are readying for attacks from either Iranian forces or their proxies after the drone strike that killed a senior Iranian general last week.

It is unclear what an Iranian retaliatory attack would look like after the death of Maj. Gen. Qassim Suleimani, an Iranian security and intelligence commander responsible for the deaths of hundreds of troops over the years, and Abu Mahdi al-Muhandis, a powerful Iraqi militia commander and government official.

But, already, American forces in the region are reinforcing their outposts, bases and airfields.

The Pentagon has directed about 4,500 additional troops to the region atop the roughly 50,000 already there. Here’s how it breaks down.

New Deployments to Iraq and Kuwait

The influx of new forces was prompted by several events: the death of an American contractor in Iraq during a rocket attack on Dec. 27 carried out by an Iranian-backed militia; protests around the United States Embassy in Baghdad afterward, following a series of American airstrikes on the militia; and last week’s drone strike on General Suleimani and Mr. al-Muhandis.

The new troops will act primarily as a defensive force, meant to reinforce American bases and compounds in the region and respond to a possible attack. No major ground offensives are planned for them.

Which Units Are Deploying

Roughly 4,000 troops — a brigade — from the 82nd Airborne Division based out of Fort Bragg, N.C., have started deploying to Kuwait. They are part of the division’s global response force, kept on standby for particular emergencies. A senior United States military officer said the deployment of the 82nd Airborne paratroopers and other ground forces was defensive, meant to position more troops in the Middle East who could be quickly deployed to defend or reinforce American embassies, consulates and military bases.

Members of the brigade will not be able to deploy with their cellphones, one Defense Department official said, citing “operational security.” In recent years, cellular communications, especially posts on social media, have given away units’ locations. CNN first reported the decision on cellphones.

Roughly 100 other paratroopers from the 173rd Airborne Brigade Combat Team, based out of Vicenza, Italy, will also deploy to the Middle East, according to a Defense Department official. Stars and Stripes first reported the deployment.

The officer noted that the planning for any larger conflict with Iran does not envision a vast land invasion like in the 1991 Persian Gulf war or the 2003 Iraq war. Instead, any prolonged conflict would rely more on air and naval forces, as well as cyberattacks, to hit Iranian targets or Iranian proxies, the officer said.

Other units include around 100 Marines from the Second Battalion, Seventh Marine Regiment. The company-size contingent is deployed to Kuwait as part of a special purpose task force meant to respond to emergencies in the Middle East. The Marines, fresh off helping American forces withdraw from northeastern Syria, are reinforcing dozens of security personnel positioned at the American Embassy in Baghdad. The compound is large, more than 100 acres, with guard posts, living areas, dining halls and small shops.

Around 100 Army Rangers from the 75th Ranger Regiment deployed shortly after last week’s drone strike. The Rangers, part of the secretive Joint Special Operations Command, most likely will act as a reaction force if any Iranian-backed forces launch a concerted attack on an American position, according to one Defense Department official.

The 26th Marine Expeditionary Unit includes roughly 2,200 Marines and sailors, composed of an infantry battalion, logistics unit and a squadron of aircraft, namely transport helicopters and attack jets. They are aboard Navy ships in the Bataan Amphibious Ready Group, made up of around 2,000 sailors, and are steaming toward the Middle East as part of a previously scheduled deployment.

These Marine Expeditionary Units have long served as a global response force. Often their deployments in the Persian Gulf have found them supporting operations in Iraq, Syria and Afghanistan.

The Troops Already in the Region

There are between 45,000 and 65,000 American military personnel — the number can vary by the day — now deployed in Saudi Arabia and other Persian Gulf nations, including around 5,500 troops in Iraq and 600 in Syria.

In response to Iranian attacks and provocations since May, the Pentagon deployed about 14,000 additional troops to the Persian Gulf region, including roughly 3,500 more to Saudi Arabia. The military assets include early warning aircraft, maritime patrol planes, Patriot air and missile defense batteries, B-52 bombers, a carrier strike group, armed Reaper drones and other engineering and support personnel.

Roughly 2,000 American troops are in Turkey, mostly based at Incirlik Air Base. Despite recent tensions with the fellow NATO country, the United States has continued to use the airfield. American aircraft launched hundreds of combat sorties from the base at the height of the conflict against the Islamic State in 2016 and 2017.

Bahrain is home to the headquarters of the United States Navy’s Fifth Fleet, which commands warships patrolling the region.

In Qatar, the sprawling Al Udeid base is home to around 10,000 troops. It is the headquarters for American air operations in the region, and hosts a fleet of midair refueling tankers, along with reconnaissance aircraft.

At any given time, the American forces in the region act much like the central nervous system for America’s long wars since the attacks of Sept. 11, 2001.

The soldiers, sailors, Marines and aircrew members run key headquarters. They resupply the roughly 12,000 to 13,000 troops in Afghanistan, and launch hundreds of surveillance missions across the region. They train local forces.

And, until Sunday, when the American-led mission in Iraq and Syria halted its campaign against the Islamic State to focus on protecting its forces from potential attack, it battled the militant group to its near demise. Allied nations, such as Canada, also stopped their operations, giving the terrorist group an opportunity to either stage more attacks or at least recuperate.

The number of troops in the region changes substantially depending on the presence of an aircraft carrier strike group (currently the Truman), and whether a large group of Marines is afloat in those waters. The 26th Marine Expeditionary Unit is likely to soon pass through the Mediterranean, according to U.S. Naval Institute’s fleet tracker, and head toward the Red Sea.

The aircraft carrier Truman will be in the region until sometime in February or March, when it will either be replaced or supported by the carrier Eisenhower after it arrives from the Mediterranean.

Aircrews assigned to the Eisenhower already have been briefed on launching potential long-range bombing missions.