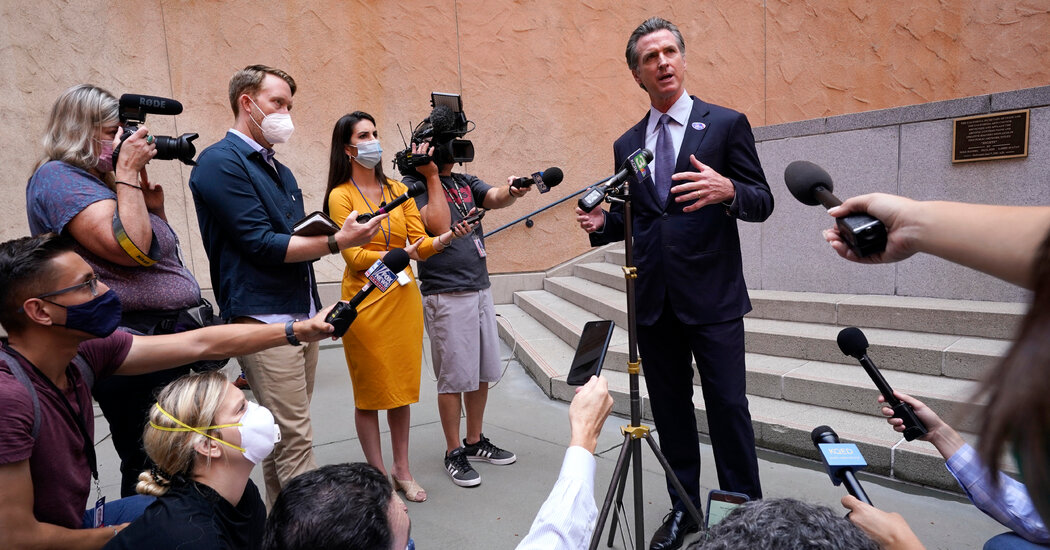 LOS ANGELES — In the waning days of the campaign to save his job, Gov. Gavin Newsom of California assessed the stakes as nothing short of saving democracy. The possibility of being recalled from office had woken him to the fragile state of the political system, which he compared to … a Fabergé egg.

“This is like a Fabergé egg, so to speak, in terms of democracy,” he said. “It’s not a football. You can’t throw it around. It’s delicate. Democracy is delicate. I didn’t realize how delicate it was, and now I’m starting to appreciate how delicate it is and how important this race is, not just for me.”

That belated realization has animated the final weeks of this odd campaign, and when the votes are counted after the polls close on Tuesday, they appear very likely to break in the governor’s favor. Yet the election seems destined to be neither a morality play about democracy nor an endorsement of Mr. Newsom and his record. It is more prosaic than that: a lopsided battle between a reasonably popular Democratic incumbent who often seems more self-absorbed than self-aware and a conservative radio talk show host who is arguably to the right of Donald Trump, in a state Mr. Trump lost by 29 percentage points.

What the recall does tell us is that California — one of the bluest states in the country — is not so different from other places in being subject to the gravitational tug of partisan forces. Even if Mr. Newsom prevails by a wide margin, the recall has underscored Californians’ continuing ambivalence about his leadership. A victory will be less a vote of confidence than a resounding rejection of the right-wing Republican agenda, a message Democrats hope will resonate beyond California.

This should not even be close — and perhaps, despite earlier alarmist polling that suggested a tight race, it never was. On the up-or-down question of whether to recall Mr. Newsom, support for his removal has been consistently about 40 percent, slightly more than the share of the vote that Mr. Trump received in 2020. Mr. Newsom, elected by a large margin in 2018, has just presided over a staggering $76 billion budget surplus that enabled the state to spend generously on myriad programs and people — from elaborate vaccine lotteries to $600 stimulus checks.

California Democrats outnumber Republicans by nearly two to one, and no Republican has won statewide in 15 years. To defeat the recall, Mr. Newsom needs only to make sure enough Democrats vote. Polls and the large turnout of Democrats in early voting suggest he will do that.

The political calculus has been complicated by several factors: the topsy-turvy nature of the Covid pandemic and its hardships, without which the recall would not have made the ballot; the extreme political polarization that has gripped the country; and California’s recall law, which makes it possible for a replacement to win with minimal support should the recall pass. But Democrats’ fears that lackluster turnout could create a doomsday scenario have also reflected lukewarm enthusiasm about Mr. Newsom and underlying dissatisfaction with his leadership on severe challenges like lack of affordable housing and devastating wildfires.

Some of the dissonance is personal. He has long moved in an elite, moneyed world of Michelin-starred restaurants and Fabergé collectors. He empathized about sharing the parental pain of Zoom school while his kids attended private schools that were already offering in-person instruction. On the day he took office, he moved with fanfare into the state-owned Governor’s Mansion in downtown Sacramento — without disclosing he had already bought a $3.7 million suburban estate that would be the family home.

Some of the tepid support is professional. His extensive use of executive orders and powers contributed to friction and distrust with some Democratic legislative leaders. He has a reputation dating back to his tenure as mayor of San Francisco of being enamored of bright, shiny objects, making headline-grabbing announcements that lack follow-through. Progressives are dissatisfied with his action on issues like fracking and single-payer health care; moderates view him as too liberal. In some sense, he lacks a committed base.

But the specter of a Trump Republican governor has united Democrats. Mr. Newsom has capitalized on his ability to accept donations of unlimited amounts — another quirk of the recall law — amassing more than $70 million to wage a scare campaign against the talk-show host Larry Elder, the front-runner to become governor if the recall passes. Mr. Elder’s extreme positions on Covid-19 (he wants to repeal vaccine and mask mandates), climate change (he’s “not sure” state wildfires are due to climate change), abortion (he is “pro-life, 100 percent”) and the minimum wage (“the ideal minimum wage is $0.00”) have enabled Mr. Newsom to set the contest in a national frame, warning that California would become Texas and Florida rolled into one. It’s not clear whether the tens of millions of dollars spent on the Vote No campaign has won Mr. Newsom any converts. But that isn’t the goal. The fear is meant to galvanize a large Democratic turnout.

Mr. Newsom largely has not campaigned on his record, with the exception of his management of the pandemic, which has earned him strong approval ratings at a time of growing support for mandates on vaccinations and masks.

At the same time, fewer than half of those surveyed recently said California was headed in the right direction, and about half thought the state was in a recession. When rated on pressing problems like housing, homelessness and economic issues — which have temporarily taken a back seat to Covid-19 concerns — Mr. Newsom has earned relatively low marks.

In recent weeks, Mr. Newsom stayed on message, warning the recall is a matter of life and death. He made little mention of accomplishments beyond boasting in some interviews about ambitious programs that have for the most part not yet gone into effect (like a promise of universal prekindergarten for 4-year-olds and an experiment in providing health care to people living on the street).

He would have liked to campaign on his record, Mr. Newsom recently told the Los Angeles Times editorial board. But that would have to wait until his presumed re-election campaign next year.

Republicans have probably squandered their best opportunity to regain power. With no obvious strong contenders on the horizon, it seems likely that 2022 will bring a sequel to what is looking like the anticlimactic recall of 2021.

Miriam Pawel (@miriampawel) is the author of “The Browns of California: The Family Dynasty That Transformed a State and Shaped a Nation.”