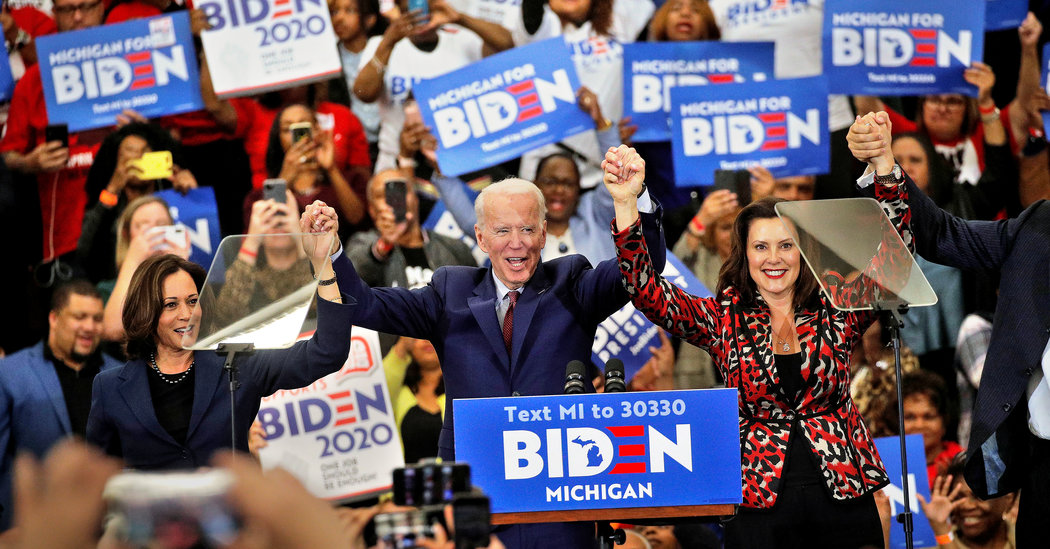 Joseph R. Biden Jr. has spoken with former President Barack Obama about the process of selecting a running mate.

His allies remain enthusiastic about Mr. Biden’s promise of a female vice-presidential candidate, despite growing Democratic fixation on Gov. Andrew M. Cuomo of New York as he commands loyal audiences for his daily briefings on the coronavirus.

Interviews with nearly two dozen Biden allies and donors over the last week provided the clearest picture yet of the critical early phase in Mr. Biden’s efforts to choose a running mate. It is a process made even more complicated by the fact that Mr. Biden and his team are quarantined in different locations and grappling with how to run a campaign during a national health crisis.

Mr. Biden has stayed in touch with friends, though, and the question of his choice surfaces often on private donor calls. His allies and advisers are also bombarded with outside opinions, and it is something that Mr. Biden, himself a former vice president, cares deeply about.

There is not yet a consensus choice or a sense of who would deliver a surefire boost to the potential ticket, according to those interviewed, many of whom spoke on condition of anonymity, though the two names most frequently mentioned were Senators Kamala Harris and Amy Klobuchar. And his supporters are divided over whether Mr. Biden should prioritize selecting a woman of color as his running mate or whether regional considerations, like ties to the industrial Midwest, should hold greater weight.

“My preference would be a black woman,” said Representative James E. Clyburn of South Carolina, the highest-ranking African-American in Congress and perhaps Mr. Biden’s most crucial supporter. “But I don’t think it has to be a black woman.”

The outbreak of the coronavirus has heightened the stakes of the vice-presidential search. A decision that traditionally reflects a cocktail of political calculations, personal chemistry and governing experience has now taken on outsize importance for Mr. Biden. He would be 78 at inauguration, might not seek a second term should he win, and would be trying to rebuild the country in the wake of a pandemic — factors that make it less likely that he would select someone who offers strong political assets but a relatively thin résumé.

“With all due respect to Biden, I think it’s much more important than any selection since Harry Truman’s,” said Mr. Clyburn, alluding to President Franklin D. Roosevelt’s elevating Mr. Truman as a compromise pick in 1944. Mr. Roosevelt did not live out the term, leaving Mr. Truman to take over before the conclusion of World War II, another moment of great peril and uncertainty for the nation.

Mr. Biden, who is not yet the nominee but holds a large delegate lead over Senator Bernie Sanders, has indicated that his search process will intensify in coming weeks.

He is said to view Mr. Obama’s vice-presidential selection process — the one that eventually selected him — as a model for his own. In 2008, Mr. Obama designated three prominent Democrats to lead an exhaustive search and vet his options: Mr. Holder and Caroline Kennedy led the initiative, along with the longtime party power broker Jim Johnson, who ultimately withdrew from the process because of concerns about his personal finances.

Mr. Biden said this week that he was looking at somewhere between six and 10 candidates, a number that has fluctuated. He has indicated that he would consider several former presidential rivals (Ms. Harris, Ms. Klobuchar and Senator Elizabeth Warren) along with other Democrats, including governors. Among them is Gov. Gretchen Whitmer of Michigan, who has been one of the most prominent governors confronting the coronavirus crisis at a moment when state leaders have become the faces of the response to the outbreak.

“She made the list in my mind two months ago,” Mr. Biden said of Ms. Whitmer in an MSNBC interview on Tuesday.

Other names often mentioned by allies include Senator Catherine Cortez Masto of Nevada and Gov. Michelle Lujan Grisham of New Mexico, two Latina leaders from the West; Representative Val Demings of Florida; and Stacey Abrams, the 2018 candidate for governor in Georgia.

Mr. Clyburn has also publicly floated others including Mayor Keisha Lance Bottoms of Atlanta, an early and loyal supporter of Mr. Biden.

If the list is wide-ranging, Mr. Biden has been consistent about the criteria: He must be “simpatico” with his potential running mate on major priorities and on philosophy, even if they have tactical disagreements. And his choice must be prepared to step into the presidency immediately if needed, he has said, a reminder of how much Mr. Biden values experience.

“It’s a big process for him, having been vice president,” said former Gov. Terry McAuliffe of Virginia, who has spoken with Mr. Biden. “For him, the most important thing is, who can step in? Who can help him lead?”

Mr. Biden is weighing other factors as well. Some allies are focused on which potential running mate could most excite progressive voters who are currently unenthusiastic about Mr. Biden.

Others argue that selecting a woman of color — Ms. Harris, with her experience in the national spotlight, is the most obvious choice — is critical to turning out younger members of the Latino or African-American communities, depending on the choice.

And still others say that Democrats will turn out regardless of the running mate and that the priority should be engaging more independent-minded voters.

The campaign has not yet announced a search committee or any other details of the process other than promising a thorough vetting operation. But in the Tuesday interview with MSNBC’s Brian Williams, Mr. Biden said he hoped to have an operation to “run the background checks” in place by mid-April.

On a staff level, several Democrats interviewed said they expected a cadre of Mr. Biden’s longtime advisers to have input. But they said they also expected Mr. Biden to consider a wider range of outside perspectives as he assesses potential candidates.

Part of the advantage of putting prominent Democratic leaders in charge of the search, as Mr. Obama did, is that it could help ensure broad acceptance of the eventual selection across a fragmented party.

Several Biden allies suggested it would be important for the search panel itself to reflect the diversity of the party, so that any disappointed constituencies feel at least that they were listened to in the process.

Traditionally, said former Senator Christopher J. Dodd of Connecticut, a friend of Mr. Biden’s, there are “certain people you’d seek out to conduct the vetting process and so forth. I think he’d like to hear from a broader spectrum of people.”

That is a priority for Representative Cedric Richmond, Democrat of Louisiana and Mr. Biden’s national campaign co-chairman, who said that he expected to be part of the search process in some capacity, but that he was most concerned with ensuring any team reflected a range of views.

“Our candidate, since Day 1, has stressed diversity,” said Mr. Richmond, a former chairman of the Congressional Black Caucus. “Diversity in terms of gender, in terms of race, in terms of age.”

Mr. Clyburn, for his part, said he did not want to serve on a search committee, though many prominent Biden allies have said that the Biden campaign should seriously consider Mr. Clyburn’s opinion on the matter, something they intend to do, Mr. Richmond said.

Asked if he had any names in mind, Mr. Clyburn quickly cited four of his colleagues: Representatives Marcia L. Fudge and Karen Bass as well as Ms. Demings and Ms. Harris.

Mr. Clyburn acknowledged that some black voters would be angry if Mr. Biden picks a white running mate — “I’m sure that would be the case,” he said — but was quick to note it was African-American women like his three daughters who helped Mr. Biden to the doorstep of the nomination without needing any additional inducement like a preferred vice-presidential choice.

“None of that is going to distract from our No. 1 goal, which is getting this guy out of office,” he said of President Trump.

Other allies and advisers have said that Ms. Klobuchar or Ms. Whitmer stands the best chance of helping Mr. Biden achieve that goal, because of their Midwest roots and abilities to connect with white working-class voters, many of whom embraced Mr. Trump in 2016.

Mr. Biden, himself a former senator, and Ms. Klobuchar in particular share both more centrist tendencies and a reverence for Washington institutions and bipartisan deal-making.

Some Democrats have cited those similarities in suggesting that Mr. Biden could have a comfortable working relationship with her, though others have suggested that she would not help Mr. Biden with one of his major weaknesses: motivating younger progressives to turn out.

Representative Tim Ryan, a former presidential candidate who represents a part of Ohio where many onetime Democrats swung to Mr. Trump in 2016, spoke highly of several possible contenders but said that his “favorite person to be with on the campaign trail was Kamala Harris” who “checks a lot of the boxes.”

He argued that there were multiple ways to create the kind of coalition that can wrest back the presidency.

“Ideally you want someone who can both energize our base, especially the African-American base that is so important for us to win, but also be able to connect to a lot of those voters who did go vote for Trump,” Mr. Ryan said. “Figuring out, OK, who best can complement him, is ultimately what they’ve got to decide.”