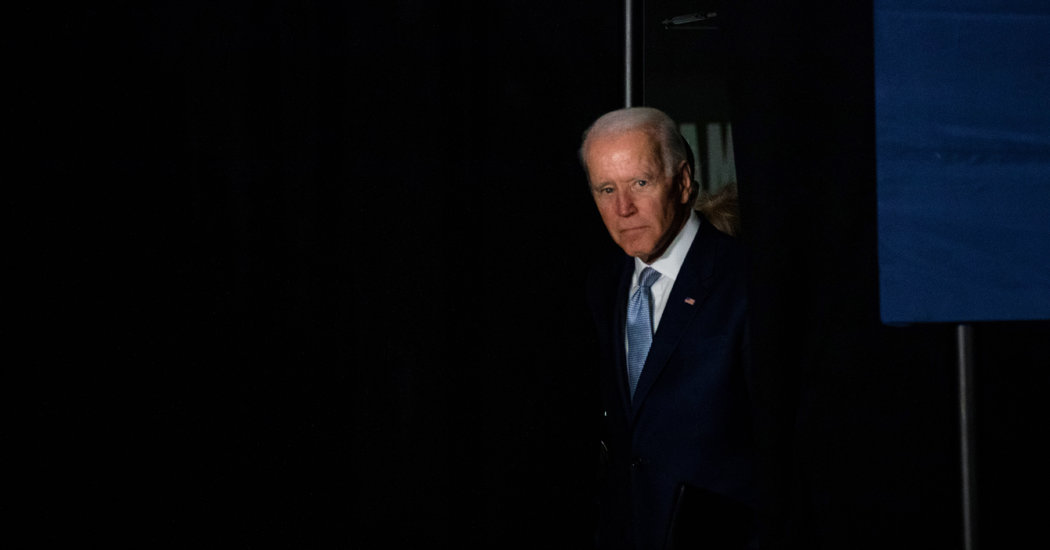 So here we Democrats have it, a nightmare spun from the looms of Steve Bannon’s imagination: The problem of Tara Reade.

In 1993, Reade worked as a staff assistant to Joe Biden when he was a member of the Senate. This March, Reade told the podcast host Katie Halper that sometime during her tenure, Biden pinned her against a wall, shoved his fingers up her skirt and digitally penetrated her. This week, Business Insider reported that one of Reade’s former neighbors, a credible-seeming Lynda LaCasse, went on the record confirming she heard the graphic details of this story years ago.

The right is having a field day. People who until this moment have shown little interest in sexual misconduct — not least the dozen-plus accusations against President Trump, which include rape and assault — have spent the past few weeks wondering why Democrats haven’t been kicking up the customary fuss, given their dedication to the #MeToo movement. Biden didn’t personally address Reade’s allegation until Friday, when he appeared on “Morning Joe” and said unequivocally, “This never happened.”

How the Democrats — and most important, Biden himself — handle it is the question. The party now has a choice: Does it behave as Trump and his Republican enablers would, because the stakes are so high? Or does it play by the rules?

And they’ve maintained that #MeToo matters. Democrats have been painfully, scrupulously, vigorously, rigorously and in some cases even excessively conscientious about policing matters of sexual misconduct, while Republicans, for the most part, have not.

When the radio personality Leeann Tweeden accused Al Franken of forcing a kiss on her during rehearsal for a skit on a U.S.O. tour (a charge shortly followed by other allegations of unwanted kisses and buttock-groping), more than two dozen of Franken’s Democratic colleagues in the Senate demanded that he resign. Meanwhile, Roy Moore, the Republican Senate candidate in Alabama who faced accusations by three women of pursuing sexual and romantic relationships with them when they were teenagers and he was in his 30s, enjoyed Trump’s full support during that campaign.

When BuzzFeed reported that John Conyers, Democrat of Michigan, had a series of sexual-misconduct allegations against him, the House Ethics Committee began an investigation the next day. (Conyers denied the allegations but resigned shortly afterward.) The Republican-controlled Senate gave the F.B.I. one week to investigate Christine Blasey Ford’s accusation of sexual assault against the Supreme Court nominee Brett Kavanaugh.

And I certainly don’t recall any prominent Republicans demanding an investigation into the myriad allegations of sexual assault — again, including rape — by Donald Trump when he secured the party’s nomination in 2016. (Trump has denied the accusations.)

So if at this moment, when the political stakes are as high as the moon, Democrats took a while to address Reade’s allegations, it may be because they’d gotten tired of playing by a stringent set of rules while the other side played by none at all. Their silence may have been the sound of a perforated sheet being torn from the Republican playbook, one that privileged ends over means, a streamlined narrative over a complicated one.

Which is not an excuse, by the way. It is merely an explanation.

Thus far, I’ve felt unease and confusion about Reade’s story. Some aspects of it have the uncomfortable ring of truth — like how she says Biden fumbled “You’re OK, you’re fine” in the aftermath of the alleged encounter — and some don’t, like the idea that this horrible incident happened in a more or less public place. That the details of Reade’s narrative have changed over time also gives me pause. But the idea that a former neighbor would be willing to come forward and confirm, on the record, that she’d heard graphic details about this encounter long ago is very troubling, to say the least.

If Reade is unignorably persuasive and sympathetic — and a good story in BuzzFeed this week suggests she will be — we are going to need to hear from Biden again.

How Biden handles this crisis will mean everything in the weeks ahead. On “Morning Joe,” he at least was quick to say, “I am not going to question her motive.” There was no smearing of Reade’s reputation, no idle sowing of any seeds of doubt about her true character.

But while Biden on Friday called for the release of any existing complaint from the National Archives, he stumbled when asked about his senatorial papers at the University of Delaware, insisting that there are none there relevant to matters of personnel and many containing documents that could be easily weaponized politically if taken out of context. (Look at how he discussed Vladimir Putin in private!) But he should at least ask his curators to go through the more than 1,800 boxes at the University of Delaware with an eye toward releasing any material about Tara Reade. Someone has to be a standard-bearer in a democracy that’s becoming less democratic by the minute.

In other words: Biden’s going to have to choose to play by the rules. Of #MeToo, to the extent that it means hearing all women out and investigating their claims. And of democracy in general, of openness. His campaign is about the restoration of values, decency, norms. It’s the hill he has to say he’ll die on, which is importantly right on one hand and galling on the other: If Biden were playing by Trump’s rules, he’d not only be denying these charges and smearing Reade — he’d be a cyclone of malfeasance, creating one spiraling distraction after another so that the media was denied a simple story with a clear throughline.

A story like Hillary Clinton’s emails, for instance, which played a large role in her undoing.

We can all rail against the unfairness of this awful predicament. In an ideal world, the Democrats would not have nominated a candidate whose history included guerrilla-nuzzling women and a possible sexual assault.

But that’s not the world we live in. We live in this one, where Biden is still the likely Democratic presidential nominee. A lot can change between now and November. But if we’re in this same position — Reade with a powerful allegation, Biden with an unwavering denial — the choice will be up to the voters.

The most striking aspect of Business Insider’s blockbuster story this week, to me, wasn’t that Lynda LaCasse confirmed hearing Reade’s story all those years ago. It’s that she’s still voting for the former vice president. “I’m for Biden, regardless,” she said.

It’s hard to think of the last time the word “regardless” did so much work. But in November, we’ll have to make a choice. Regardless.