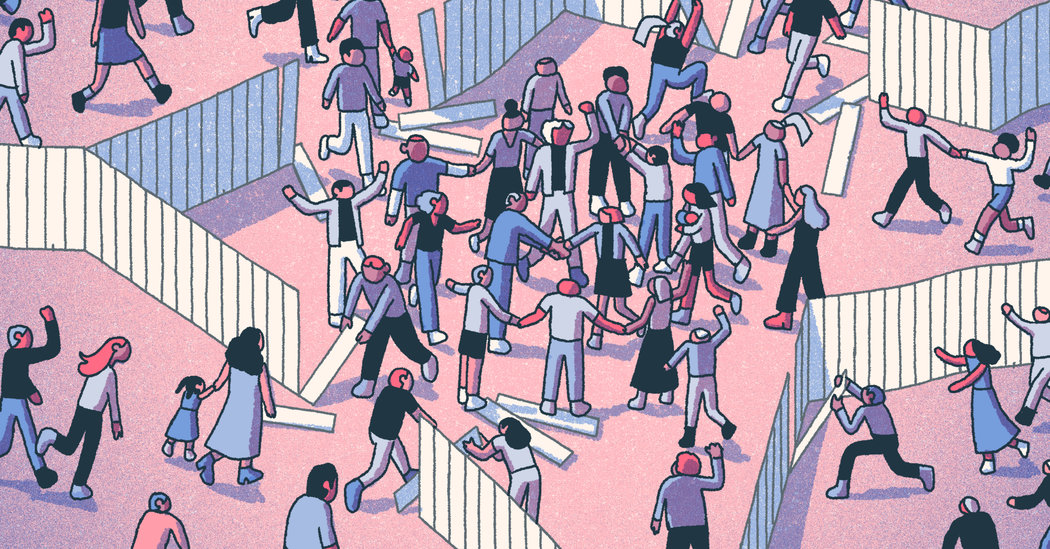 Three groups of governors in the East, West and Midwest announced that they would work together on plans to lift the lockdowns in their states once the peak of the coronavirus outbreak has passed. At a time of federal abdication, these state leaders are thinking seriously about alternatives to the existing model of American federalism.

The regional partnerships may signal the emergence of a new framework for dealing with other pressing issues on which Washington has failed to lead — issues like infrastructure, transportation, health insurance and climate change. The long-overdue process of replacing America’s outdated federal system has perhaps already begun.

On the same day, California, Oregon and Washington formed the Western States Pact and seven East Coast states, from Delaware to Massachusetts, created a “multistate coalition.” Soon after, seven mostly Midwestern states, from Kentucky to Minnesota, joined in a yet-unnamed alliance that Gov. Tim Walz of Minnesota likened to “sort of a loose Articles of Confederation approach.”

That the chief executive of an American state is invoking the Articles of Confederation as “the model we’re taking now” (Mr. Walz again) hints at how transformative these developments may be. The Union as Americans have known it for centuries may be beginning to fray.

The 17 states of the three blocs together include nearly half the American population and an even higher percentage of the country’s economic activity. Their agreements for interstate cooperation are informal, nonbinding pacts among governors (14 Democrats and three Republicans) to share data and coordinate efforts. Each state is free to go along with neighboring states or to plot its own path forward when that makes more sense.

As it has in many areas of life, the coronavirus has exposed and exacerbated this country’s unresolved conflicts and contradictions. Neither the paralyzed, sclerotic central government nor the 50 unequal and arbitrarily determined states turn out to be most reliable or effective for determining policy related to all-consuming emergencies like a pandemic.

Perhaps the greatest obstacle to redrawing the political map of the United States in this way is our bipartisan tradition of worshiping the founders. For many of the framers of the Constitution, nothing was more disturbing than the possibility that the Union would fracture into three or four smaller republics, or regional “sub-confederations.”

This was precisely the peril that haunted the country under the Articles of Confederation. By 1786, a decade after the 13 colonies declared independence, the country already seemed to be breaking apart. Divisive questions related to trade, taxes, land and inequality threatened to rupture the young Republic. Frustrated politicians and ordinary citizens in every part of the Confederation favored reducing the bounds of government to a more local scale. It wasn’t possible to govern so enormous a country — at least not as a republic. Better, as one Massachusetts writer put it, to “contract … the limits of the confederacy to such as are natural and reasonable,” and within those to create “a real and an efficient government.” If that meant forming a new Nation of New England, so be it.

Whether the Union held together wasn’t as important as the survival of those interests and values it had been created to secure.

But for others, sub-confederations were anathema. They would immediately create rivalries between the republics, perhaps lead to civil war, and invite foreign meddling in American politics. The victory of the Revolution would be lost.

The founders were so concerned about interstate alliances eroding national unity that they sought to prevent any from forming without federal support. They wrote into the new Constitution a provision expressly forbidding their formation — Article 1, Section 10, Clause 3: “No State shall, without the Consent of Congress … enter into any Agreement or Compact with another State …”

Well-known interstate partnerships like the century-old Port Authority of New York and New Jersey exist today only because they received congressional authorization. Some commentators have suggested that alliances like the Western States Pact, formed to handle the coronavirus outbreak, will require federal approval as well.

That is unlikely. According to Virginia v. Tennessee — an 1893 case regarding a longstanding boundary dispute between the two states — interstate compacts require congressional authorization only when they claim new powers for the states that they did not have before or if they intrude on federal prerogatives. Despite President Trump’s claim of “total” authority, the power to lift lockdowns imposed by state governments — or, for that matter, to purchase necessary medical supplies — already rests with the states.

There are practical reasons these regional coalitions should be seen as a positive development for our deadlocked, dysfunctional nation and perhaps even expanded to focus on other issues. The Federal Reserve is already organized by 12 regional districts. The Census Bureau splits the country into nine divisions. The Department of Transportation designates 13 “megaregions,” cross-state territories centered on urban cores and “connected by existing environmental, economic, cultural and infrastructure relationships.” These megaregions may be the building blocks of a new post-pandemic federalism.

Still, they may also produce partisan fissures. Would liberals who today cheer the state formations object to a group of Republican-led Southern states, for instance, forming a league to forge their own policy direction (regarding coronavirus or anything else) under a Democratic presidency?

A thorough overhaul of American federalism, a national recommitment to the idea that not every issue that divides us needs to be decided in Washington, will require concessions and compromises. Are progressives in the Pacific states willing to see abortion banned in the South if it means securing a regional pact to provide universal health insurance to every person, citizen or otherwise, west of the Cascades? Are conservatives in the heartland prepared to accept severely reduced federal subsidies in exchange for more autonomy?

As both the pandemic and its economic effects continue to tear at the country’s already strained bonds, the answer on both sides may increasingly be yes. In any case, as the pandemic has shown, maintaining the option of devolving power to more local levels of government is crucial in the absence of federal leadership during an emergency or if a genuinely tyrannical and (unlike Mr. Trump) ruthlessly efficient president someday seizes control.

It would have seemed far-fetched even six weeks ago to imagine the president leaving governors to handle a pandemic on their own and states teaming up in regional coalitions to plot a path forward. Looking further ahead, regional compacts might be the way to control and fend off national dissolution rather than accelerate it. The form of the United States of America would be retained, but limited to something more akin to a loose league like the Articles of Confederation. The constituent pieces of this new Union would be eight to 12 regions, between the states and the federal government, which would take on many of the responsibilities of both.

This new Union might be more responsive to the needs of ordinary people, more attuned to the ecological impact of human actions and less likely to go abroad, as John Quincy Adams famously put it, “in search of monsters to destroy.” Rather than a plan for less government, this kind of reorganization could clear away the obstacles for a more active, energetic one — at least in the places that want it.

Richard Kreitner, a contributing writer at The Nation, is the author of the forthcoming “Break It Up: Secession, Division, and the Secret History of America’s Imperfect Union.”