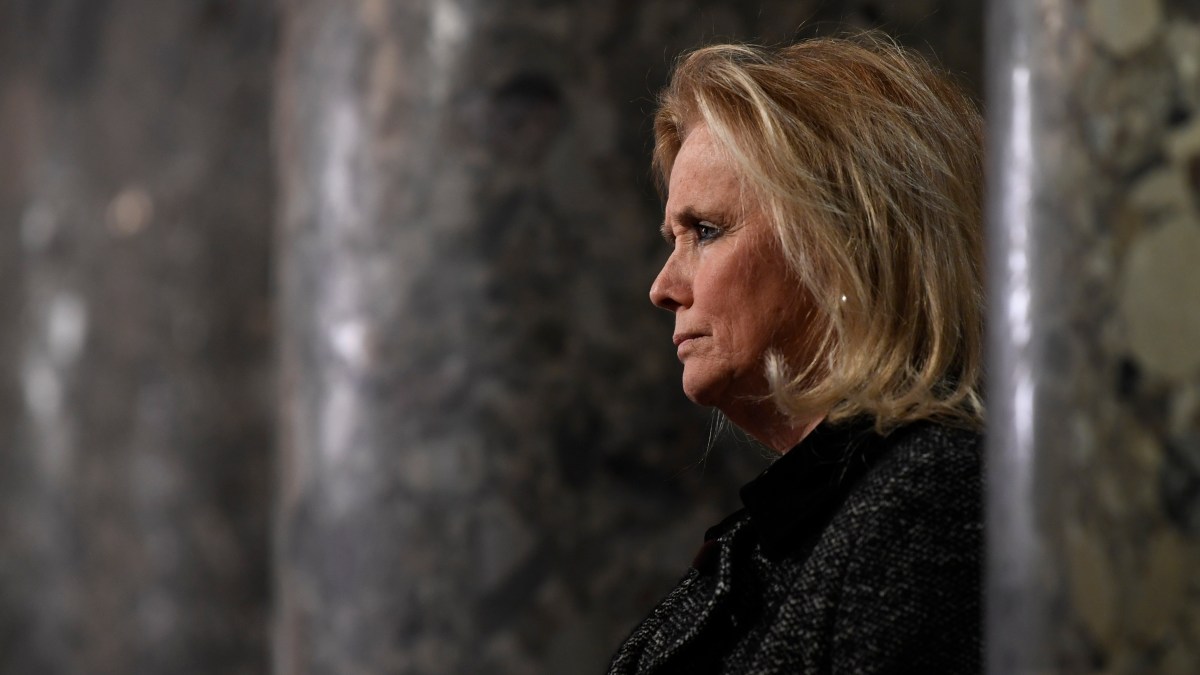 President Donald Trump took a swipe at the late Rep. John Dingell during his raucous impeachment-day rally on Wednesday, drawing a rebuke from the longtime Michigan congressman’s widow and successor in the House, who called the comments “hurtful.” House Speaker Nancy Pelosi was among those the next day who called Trump’s suggestion that Dingell was in hell cruel.

“Let us pray for the president,” Pelosi said when reporters asked about the comments on Thursday. She said Trump “clearly is insecure when it comes to statespersons” like former Sen. John McCain and John Dingell.

“What the president misunderstands is that cruelty is not wit,” Pelosi said. “Just because he gets a laugh for saying the cruel things that he says doesn’t mean he’s funny. It’s not funny at all. It’s very sad.”

White House press secretary Stephanie Grisham told ABC’s “Good Morning America” that Trump was “just riffing” when he spoke about Dingell at the Wednesday night rally. She said she didn’t know why Trump decided to allude to Dingell being in hell.

“You’d have to talk to the president about that,” she said.

But Grisham suggested that the president was venting his frustration after being impeached by the House: “It was a very very supportive and wild crowd and he was just riffing on some of the things that had been happening the past few days.”

Trump said at the rally that Debbie Dingell had thanked him profusely for providing “A-plus treatment” after John Dingell’s death in February, including ordering flags flown at half-staff.

He quoted Debbie Dingell as saying at that time, “Thank you so much. John would be so thrilled. He’s looking down.”

Then, Trump told his audience in Michigan, “I said, ‘That’s OK. Don’t worry about it.’ Maybe he’s looking up. I don’t know.”

The remark drew wary oohs and aahs from the crowd. John Dingell was a powerful advocate for the swing state he represented for more than 59 years. He was the longest-serving member of Congress in U.S. history.

Trump then said: “But let’s assume he’s looking down.”

Trump narrowly won Michigan in 2016, and his campaign is betting on a repeat in the state to assure a 2020 victory.

His comment came shortly after Debbie Dingell voted in favor of two articles of impeachment against the president.

Debbie Dingell addressed Trump in a tweet: “Mr. President, let’s set politics aside. My husband earned all his accolades after a lifetime of service. I’m preparing for the first holiday season without the man I love. You brought me down in a way you can never imagine and your hurtful words just made my healing much harder.”

She later told MSNBC’s Andrea Mitchell that she had appreciated Trump’s kindness in the immediate aftermath of her husband’s death. She said she didn’t know “why he did what he did,” and wished to “get back to a time of civility.”

“It hurt. I loved my husband,” Dingell said of Trump’s comments. “We had a love affair most never have, and it’s been a hard holiday season, and those kinds of shots — people forget that members of Congress are human, and we go through real hard times.”

GOP Rep. Fred Upton of Michigan, who voted against impeaching Trump, tweeted: “I’ve always looked up to John Dingell – my good friend and a great Michigan legend. There was no need to ‘dis’ him in a crass political way. Most unfortunate and an apology is due.”

Sen. Lindsey Graham also said, “If he said that I think he should apologize,” NBC News reported.

Grisham insisted that the White House respects the Dingell’s family’s public service. She said she hadn’t discussed the matter with the president.

“I am very very sorry for her loss,” she added.