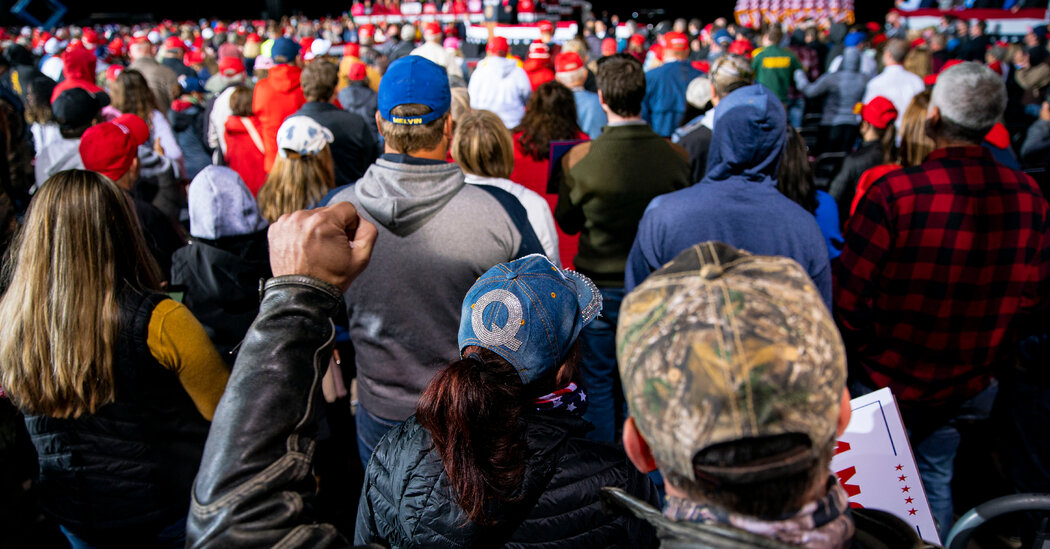 Lately, I have been putting an embarrassing amount of thought into notions like jinxes and knocking on wood. The polls for Joe Biden look good, but in 2020, any hint of optimism feels dangerously naïve, and my brain has been working overtime in search of potential doom.

I have become consumed with an alarming possibility: that neither the polls nor the actual outcome of the election really matter, because to a great many Americans, digital communication has already rendered empirical, observable reality beside the point.

If I sound jumpy, it’s because I spent a couple of hours recently chatting with Joan Donovan, the research director of the Shorenstein Center on Media, Politics and Public Policy at Harvard’s Kennedy School. Donovan is a pioneering scholar of misinformation and media manipulation — the way that activists, extremists and propagandists surf currents in our fragmented, poorly moderated media ecosystem to gain attention and influence society.

This week, Donovan’s team published “The Media Manipulation Casebook,” a searchable online database of their research. It makes for grim reading — an accounting of the many failures of journalists, media companies, tech companies, policymakers, law enforcement officials and the national security establishment to anticipate and counteract the liars who seek to dupe us. Armed with these investigations, Donovan hopes we can all do better.

I hope she’s right. But studying her work also got me wondering whether we’re too late. Many Americans have become so deeply distrustful of one another that whatever happens on Nov. 3, they may refuse to accept the outcome. Every day I grow more fearful that the number of those Americans will be large enough to imperil our nation’s capacity to function as a cohesive society.

“I’m worried about political violence,” Donovan told me. America is heavily armed, and from Portland to Kenosha to the Michigan governor’s mansion, we have seen young men radicalized and organized online beginning to take the law into their own hands. Donovan told me she fears that “people who are armed are going to become dangerous, because they see no other way out.”

Media manipulation is a fairly novel area of research. It was only when Donald Trump won the White House by hitting it big with right-wing online subcultures — and after internet-mobilized authoritarians around the world pulled similar tricks — that serious scholars began to take notice.

The research has made a difference. In the 2016 election, tech companies and the mainstream media were often blind to the ways that right-wing groups, including white supremacists, were using bots, memes and other tricks of social media to “hack” the public’s attention, as the researchers Alice Marwick and Rebecca Lewis documented in 2017.

But the war since has been one of attrition. Propagandists keep discovering new ways to spread misinformation; researchers like Donovan and her colleagues keep sussing them out, and, usually quite late, media and tech companies move to fix the flaws — by which time the bad guys have moved on to some other way of spreading untruths.

While the media ecosystem has wised up in some ways: Note how the story supposedly revealing the contents of Hunter Biden’s laptop landed with a splat last week, quite different from the breathlessly irresponsible reporting on the Democrats’ hacked emails in 2016. But our society remains profoundly susceptible to mendacity.

Donovan worries about two factors in particular. One is the social isolation caused by the pandemic. Lots of Americans are stuck at home, many economically bereft and cut off from friends and relatives who might temper their passions — a perfect audience for peddlers of conspiracy theories.

Her other major worry is the conspiracy lollapalooza known as QAnon. It’s often short-handed the way Savannah Guthrie did at her town hall takedown of Donald Trump last week — as a nutty conspiracy theory in which a heroic Trump is prosecuting a secret war against a satanic pedophile ring of lefty elites.

But that undersells QAnon’s danger. To people who have been “Q-pilled,” QAnon plays a much deeper role in their lives; it has elements of a support group, a political party, a lifestyle brand, a collective delusion, a religion, a cult, a huge multiplayer game and an extremist network.

Donovan thinks QAnon represents a new, flexible infrastructure for conspiracy. QAnon has origins in a tinfoil-hat story about a D.C.-area pizza shop, but over the years it has adapted to include theories about the “deep state” and the Mueller probe, Jeffrey Epstein, and a wild variety of misinformation about face masks, miracle cures, and other hoaxes regarding the coronavirus. QAnon has been linked to many instances of violence, and law enforcement and terrorism researchers discuss it as a growing security threat.

“We now have a densely networked conspiracy theory that is extendible, adaptable, flexible and resilient to take down,” Donovan said of QAnon. It’s a very internet story, analogous to the way Amazon expanded from an online bookstore into a general-purpose system for selling anything to anyone.

Facebook and YouTube this month launched new efforts to take down QAnon content, but Q adherents have often managed to evade deplatforming by softening and readjusting their messages. Recently, for instance, QAnon has adopted slogans like “Save the Children” and “Child Lives Matter,” and it seems to be appealing to anti-vaxxers and wellness moms.

QAnon is also participatory, and, in an uncertain time, it may seem like a salvation. People “are seeking answers and they’re finding a very receptive community in QAnon,” Donovan said.

This is a common theme in disinformation research: What makes digital lies so difficult to combat is not just the technology used to spread them, but also the nature of the societies they’re targeting, including their political cultures. Donovan compares QAnon to the Rev. Charles Coughlin, the priest whose radio show spread anti-Semitism in the Depression-era United States. Stopping Coughlin’s hate took a concerted effort, involving new regulations for radio broadcasters and condemnation of Coughlin by the Catholic Church.

Stopping QAnon will be harder; Coughlin was one hatemonger with a big microphone, while QAnon is a complex, decentralized, deceptive network of hate. But the principle remains: Combating the deception that has overrun public discourse should be a primary goal of our society. Otherwise, America ends in lies.

Farhad wants to chat with readers on the phone. If you’re interested in talking to a New York Times columnist about anything that’s on your mind, please fill out this form. Farhad will select a few readers to call.