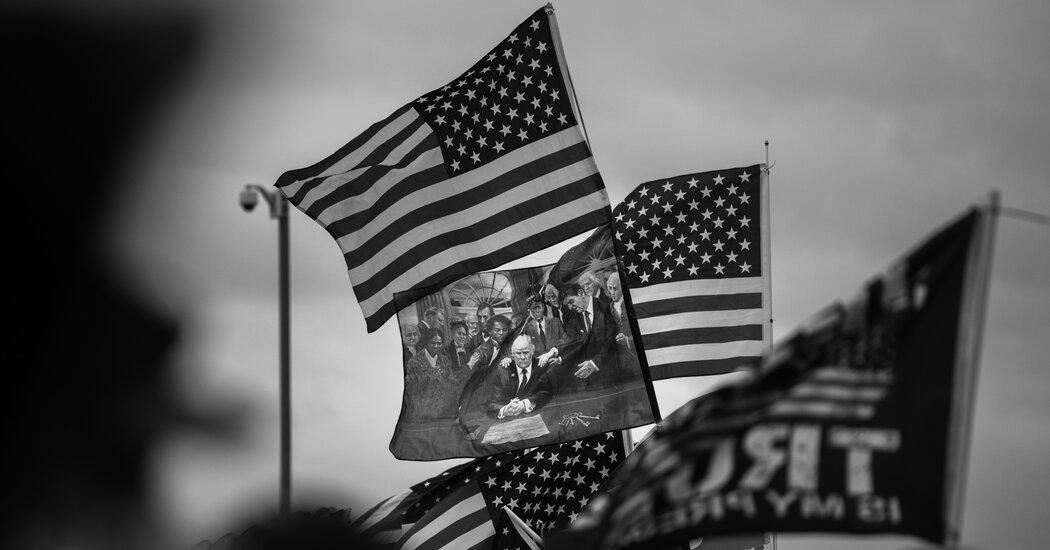 It’s Election Day 2024. President Biden and former President Donald Trump have been locked in battle for months, with Mr. Biden holding a stable, sizable lead in the popular vote but much narrower leads in key swing states like Wisconsin, Georgia and Arizona. Turnout has been exceptionally high, nearly matching 2020 levels.

The outcome will clearly come down to those three key states — all with Republican legislative majorities that put in place laws making them the final arbiters of electoral disputes. As the counting in the three proceeds, Democratic Party representatives raise a hue and cry that it is proceeding unfairly, with significant numbers of valid ballots being rejected without proper cause. State election officials (mostly pro-Trump Republicans) declare that there is no substance to these objections. All three conclude that Mr. Trump won their states’ electors, and with them the presidency.

Is it likely that Democratic voters would accept this result without protest and a constitutional crisis (and perhaps even violent protest)?

I think the answer is no, and I suspect most Democrats reading this would agree with me. And that’s why, notwithstanding all the good arguments for reforming our electoral system, there is no legislative solution to the deepest problem threatening American democracy: the profound lack of trust in the legitimacy of the opposition.

The scenario I described above is precisely what multiple observers have been warning about in the year since the Jan. 6 attack on the Capitol. Republican legislatures in several states have revised their election statutes to give themselves more authority over the conduct of elections in their states, reducing the authorities of state secretaries of state, governors and county election officials in the process. From the perspective of anyone who isn’t a Republican, those moves look like preparation to commit fraud and to do so with legal impunity.

Many of those legislators, however, will say that their moves are intended to shore up confidence in the electoral system — that they are, in fact, a response to those same terrible events of Jan. 6. Their voters believe — wrongly, as at least a few of those same Republican officials will admit — that the 2020 election was decided unfairly, on the basis of fraudulent votes. At a minimum, more and more mainstream Republicans are arguing, voting procedures were capriciously changed by biased election officials and judges using the pandemic as an excuse in a way that unfairly advantaged Democrats. Therefore, they need to take these kinds of steps to convince their voters that the election will be conducted fairly.

Perhaps they are right that this is what it would take to convince their voters. If they are, though, they will succeed only by undermining the confidence of the other party in those same election results. The same, sadly, is likely true of proposed Democratic attempts to shore up confidence in the electoral system.

It seems to have been largely forgotten, but in 2020, despite extraordinary strain, the system worked. As independent observers have attested, no meaningful fraud marred the election. Turnout was extremely high for both parties despite pandemic conditions, attesting to the lack of effective voter suppression as well. Republican officeholders at all levels of government were pressed to find fraud that didn’t exist, to decertify valid results and otherwise to undermine the integrity of the election. They overwhelmingly resisted that pressure. The same is true of the judicial branch, which rejected out of hand the Trump campaign’s spurious legal challenges.

None of that, however, was sufficient to persuade tens of millions of Trump voters that their candidate actually lost. On the contrary: When forced to choose between President Trump’s baseless assertions and the conclusions of those Republicans duly charged with overseeing the election, these voters chose Mr. Trump over members of their own party who acted with integrity. The rioters on Jan. 6 turned to violence because they believed that the election was stolen, and they believed that despite all the authorities, Democrats and Republicans, actually responsible for running it saying otherwise.

That’s not a problem that can be solved by tinkering with the mechanics of elections oversight. It’s entirely possible that worthwhile reforms to limit political grandstanding could fuel distrust by Democrats in the legitimacy of elections.

Take the Electoral Count Act, a particular focus of concern because of John Eastman’s memo suggesting, absurdly, that it granted Vice President Mike Pence the authority to unilaterally set aside certified electoral votes. The act was originally passed to prevent a repeat of the disputed election of 1876, during which Congress — previously responsible for resolving such disputes — deadlocked over which electors to approve from three states that submitted dueling slates. The act reduced Congress’s role and aimed to provide clear rules for how and when states must approve their slates to avoid disputes.

Those provisions can — and should — be clarified, to eliminate the possibility that a future vice president might do what Mike Pence refused to, or that future representatives and senators could baselessly undermine popular confidence in election integrity as numerous Republicans have done in the wake of the last election.

But what any such reform would do is push more authority back down to the state level or over to the judicial branch. What happens if those actors behave in a corruptly partisan manner? With key state legislatures in Republican hands and with the Supreme Court dominated by Republican appointees inclined to give latitude to those same state legislatures in setting electoral rules, it’s not hard to imagine many Democrats in 2024 concluding that by reforming the act they had disarmed themselves.

Some Democrats, therefore, have called for federalizing America’s unusually decentralized national elections, to override the possibility of partisan state legislature interference in either the conduct of the election or the vote count and certification of the winners. Because the Constitution vests a great deal of authority at the state level, some of these proposals might well face constitutional challenges — but even if they passed muster, what would they achieve? They would invest more power in Congress, which might well be in Republican hands. How confident would Democrats be in an election in 2024 ultimately overseen by Kevin McCarthy in the House and Mitch McConnell in the Senate?

Nor would investing that power in another state-level authority be assured to fare better. After the 2020 election, Georgia Secretary of State Brad Raffensperger, a Republican, was a hero for refusing to compromise his integrity. But in the 2000 election, the independent authority responsible for running the election in Florida was Secretary of State Katherine Harris, a Republican who was widely distrusted by Democrats for what they saw as favoritism to George W. Bush. This distrust was a mirror of Republicans’ own distrust of the recount process as conducted in a number of Democratically controlled counties in South Florida. It was distrust all the way up and all the way down. It ended only because Al Gore accepted the authority of the Supreme Court.

There are potential reforms that could significantly improve the democratic accountability of our system and reduce the scope for either party to skew the process. Taking redistricting out of the hands of state legislatures and entrusting it to nonpartisan bodies is an obvious example. Breaking up the largest states, or creating multimember congressional districts, are more profound reforms that could empower currently underrepresented political minorities from both camps. There are likely deals to strike on voting rights that could provide better security against both fraud and suppression.

Such reforms, however, will never be trusted if they are enacted on a purely partisan basis to plainly partisan ends. Even if they are responding to real distortions, and are formally neutral, they will be perceived and opposed as illegitimate partisan grabs if they aren’t undertaken cooperatively. They won’t break the cycle of distrust or prevent a recurrence of Jan. 6 any more than widespread agreement among nonpartisan observers that the 2020 election was fair did so.

The problem is not that America is incapable of conducting an election with integrity. We just did, under some of the most difficult conditions.

That’s a problem that can’t be legislated away. It can be resolved only by the parties themselves committing that demagogy will stop at the election’s edge. Until that happens, American democracy will be in crisis, no matter what laws we pass to protect it.

Noah Millman is a political columnist at The Week and the film and theater critic at Modern Age.