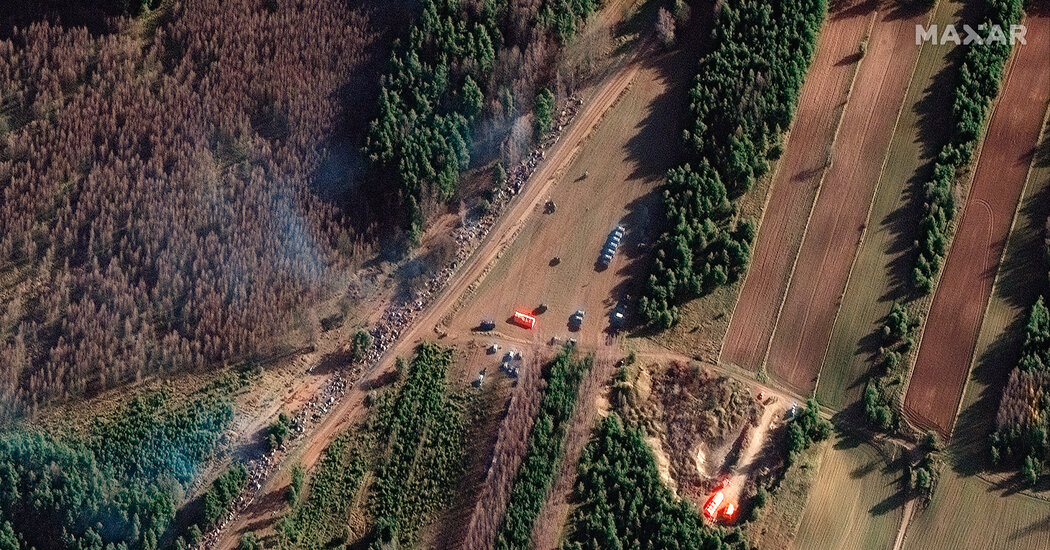 Europe has long paid other nations to keep refugees away from its borders. Now, Belarus wants something, too, and has brought migrants right to Europe’s door to get it.

In one sense, the border crisis between Poland and Belarus is a tit-for-tat geopolitical conflict in which refugees and migrants just happen to be the weapons.

Belarus, in May, forced down a civilian airliner to arrest a dissident on board. The European Union, as punishment, imposed economic sanctions on Belarus. Now, in apparent retaliation, Belarus is granting visas to thousands of Middle Easterners and driving them to the borders of Poland, Latvia and Lithuania, all E.U. member states. Those countries must then either process them — or allow them to freeze at the border, which has so far been their preference.

Geopolitical conflict is the framing that many E.U. officials are going with.

“This is a war in which civilians and media messages are the ammunition,” Poland’s prime minister, Mateusz Morawiecki, said in a statement.

But in another sense, this is just the latest iteration of a yearslong cycle that is more about migration than geopolitics or war. The European Union has made it clear for years that it will go to incredible lengths to prevent migrants and refugees from reaching its external borders. This gives countries on the European periphery the leverage, and incentive, to use those refugees as pawns.

In most cases, the union has not only tolerated but also encouraged this, granting sweeping concessions to Libya, Sudan, Turkey and others to keep refugees from reaching Europe. This often involves gross human rights abuses against refugees in order to deter them — for which the E.U. has paid billions of dollars to some of the world’s more vicious dictatorships.

But sometimes that system breaks down, either because the country on Europe’s periphery is no longer able to prevent refugees from reaching Europe (as when Libya’s government collapsed in 2011) or because it deliberately allows more refugee traffic in order to pressure the E.U. Either way, the result looks like the Belarus-Poland border, though usually on a much larger scale.

Belarus, in other words, is joining a practice that the European Union has long institutionalized: cutting deals with border countries to keep refugees and migrants away from the E.U. border.

The differences are that Belarus forced its way into this situation, whereas Turkey and Sudan landed there by dint of geography. Instead of a cash payout, Belarus’s leader, President Aleksandr G. Lukashenko, is seeking relief from international sanctions. And though part of Turkey’s role has been to effectively hide the human costs of these migration policies far from European eyes, Belarus has imposed them right on the E.U. border.

Belarus, in the process, put thousands of innocent people in harm’s way. Still, it did not invent the E.U.’s refusal to process migrants and refugees who it considers undesirable, even if it means their deaths. Nor did it invent the E.U.’s embarrassment at the world seeing this.

International law, as well as the domestic laws of most countries, requires processing any border arrival with a credible asylum claim. The host country has to let those people stay while it evaluates their claims, which can take months or even years.

Depending on the country and the circumstances, the arrivals may be placed in a refugee camp or government housing, or forced to sleep on the street. Sometimes, as in mid-2010s Europe, a nativist backlash may follow.

These laws grew out of World War II, when many Europeans were themselves refugees. It instilled a belief that basic human rights, as well as global stability, required safe countries to accept people who were at great risk.

In 1991, the United States opened a loophole in these obligations. To prevent refugee boats from reaching Florida, which would oblige the United States to process the Haitians on board, Coast Guard vessels diverted them elsewhere.

Ever since, several wealthy states have embraced this as explicit policy, and none more enthusiastically than the European Union.

“It allows wealthy states to have their cake and eat it, too: maintaining a formal commitment to international refugee law, while at the same time largely being spared the associated burdens,” Thomas Gammeltoft-Hansen, a Danish scholar of immigration law, has written.

European officials have repeatedly stressed, through policies aimed at would-be migrants overseas, that they have made the journey more dangerous to dissuade people from coming. When many crossed the Mediterranean in small boats, the E.U. curtailed search-and-rescue missions, restricted aid groups and even closed its ports to emergency rescue vessels.

This predictably increased the number of people who have drowned while trying to cross, sometimes by the hundreds. And some researchers believe that these efforts have not actually deterred people from coming. Sea crossings have remained numerous, and refugees often say, when asked, that they are fleeing far more desperate or dangerous circumstances.

This may be why the E.U. has so emphasized a strategy of having countries on its periphery intercepting the arrivals.

Italy gave Libya five billion euros in 2007 as part of such a deal, for example. Libya’s dictatorship won more concessions, some financial and others diplomatic, even as it operated one of the world’s most oppressive governments.

Libya’s services were unambiguous: It not only halted refugees and migrants, but also detained thousands in dire conditions that were clearly intended to deter others from coming.

“No amount of reading and preparation can actually prepare you for standing inside a detention center and seeing the sea of faces who are huddled in a dark room,” Sam Turner, then the Libya section head for Doctors Without Borders, told me in 2019.

“We’re not talking about prisons that were built to hold people,” he said. “We’re talking about warehouses that have been converted. We’ve seen people going without food for days on end. Locked in these rooms for days at a time. Little access to sunshine and the outside world. It’s really harrowing.”

A migrant crisis. Gatherings of migrants along the European Union’s eastern border have led to an escalating stand-off between Belarus and the E.U. Here’s what to know:

How it began. A growing number of migrants fleeing poverty and war have been attempting to enter E.U. countries such as Poland and Lithuania from Belarus over the past few months. A sharp rise was detected after the E.U. imposed sanctions on Belarus in May.

The Difference in Belarus

This and similar deals with other countries have proved, for the European Union, effective. Refugee arrivals are down by two-thirds since 2015. The effect is noticeable. On a recent trip to Italy, in cities where a few years ago refugees were highly visible, I saw almost none.

But the global refugee crisis has hardly eased since then. Rather, the E.U. has simply succeeded in offloading it to poorer and more authoritarian countries on its periphery, freeing itself of legal obligation and of having to confront the substantial human cost of its policies.

This set of priorities applies to the standoff with Belarus, too. Poland’s government, in addition to refusing to process the people huddling at its border, has blocked journalists and aid agencies from visiting the border. Even doctors are not permitted, despite what is thought to be a rising risk of death.

It’s not clear how different this is from preventing refugee and migrant arrivals by forcing them into extremely dangerous circumstances in the Mediterranean or in North Africa. Perhaps the difference is that, in Europe’s usual strategy, those people are kept out of sight, far from Europe, and detained indirectly so that Europeans do not have to feel culpable. Now, the scene that might normally play out in Tripoli is playing out on the Polish border.

Although it would be easy to put responsibility entirely on Poland’s right-wing government, which has frequently transgressed the bloc’s more liberal norms, it may not be so far off from European Union preferences. Angela Merkel, the German chancellor who accepted one million refugees in 2015, publicly thanked Poland, Latvia and Lithuania for protecting the E.U. borders.

In the end, even as outsiders see Belarus’s actions as that of a dangerous rogue state, the European Union may come to treat it, however grudgingly, much as it treats other dictators on its border: a partner in keeping the needy and desperate far away.