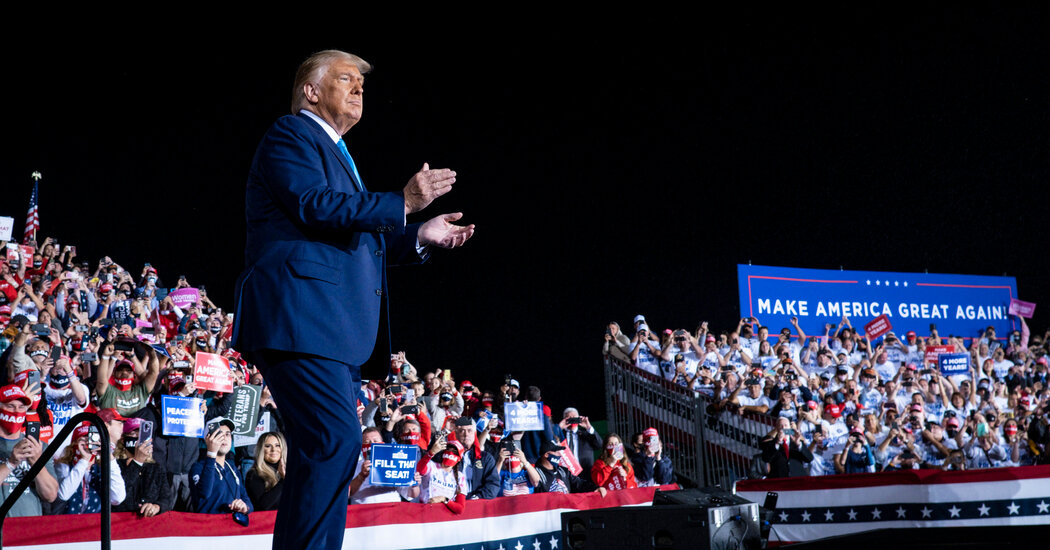 MIDDLETOWN, Pa. — President Trump sought again on Saturday night to cast doubt on the integrity of the presidential election, telling supporters that the only way Democrats can win in Pennsylvania is to “cheat on the ballots” and raising the prospect that a disputed election could be decided by Congress.

Pressing his baseless case that the election in November will be a “disaster,” Mr. Trump said at a rally just outside a hangar at the Harrisburg airport that he would have “an advantage” if Congress were to decide.

The comments, delivered in drizzling rain, were part of the president’s continuing effort to discredit the United States’ election process as he trails former Vice President Joseph R. Biden Jr., his Democratic rival.

“It’s counted one code per state,” he said. “So we actually have an advantage. Oh, they’re going to be thrilled to hear that. I’m sure they’re trying to figure out, ‘How can we break that one?’”

Mr. Trump appeared to be referring to what is known as a contingent election, in which the House of Representatives chooses the next president if no candidate wins an absolute majority of votes in the Electoral College — an outcome that would be more likely if the results in key states were in dispute. In that case, each state’s House delegation is given one vote, with 26 votes required to win.

Mr. Trump is correct that Republicans currently control 26 state delegations and Democrats 22, with two effectively tied — although the vote occurs after a new Congress is seated in early January, so those totals could change. (The Senate would choose the vice president separately.)

With less than six weeks until Election Day, Mr. Trump has continued to suggest that he will challenge any outcome that is unfavorable to him, and his campaign and its allies are engaged in legal fights in several battleground states, including Pennsylvania, over the rules governing mail-in voting, which could complicate and slow the count in those states.

Mr. Trump is hoping that his new nominee for the Supreme Court, Judge Amy Coney Barrett, will be confirmed before the election on Nov. 3, guaranteeing him a conservative majority on the court in the event that it decides the outcome, as it did in 2000.

Mr. Trump has repeatedly declined to say whether he would support an orderly transfer of power if he does not win re-election, and he has spent months stoking doubt in the election process by falsely insisting — against evidence offered by his own government officials — that mail-in ballots are subject to widespread fraud.

At the rally on Saturday, he referred to several recent cases in which ballots have been misplaced or lost, including a handful of ballots in Pennsylvania.

“Look, you know, what they are doing is not right,” he said.

Shortly after announcing Judge Barrett’s nomination in a Rose Garden event on Saturday at the White House, Mr. Trump flew to the Harrisburg airport to speak to an outdoor crowd of perhaps a few thousand — far fewer than the “tens of thousands” he claimed from onstage. It was the latest of several rallies he has held in which his supporters packed together, mostly without face masks.

Flanked by a huge television screen displaying the words “FILL THAT SEAT!” Mr. Trump used the announcement to whip up his supporters, eliciting roars of applause and chants of “U.S.A., US.A.,” when he predicted that Republicans in the Senate would quickly confirm Judge Barrett.

“She will defend your God-given rights and freedoms,” Mr. Trump said, accusing Mr. Biden of refusing to provide the names of potential nominees to the Supreme Court because his “names will be handpicked by socialists.”

Mr. Trump and his campaign are betting that the opportunity to cement a conservative majority on the court for decades to come will underscore for his supporters the need to return him to the Oval Office for another four years.

But the president did not dwell exclusively on Judge Barrett. In a speech that lasted more than an hour, Mr. Trump railed against Mr. Biden and exaggerated his own record during his time in office.

He lashed out at other Democrats, too. When the crowd started chanting “Lock her up!” at his mention of Hillary Clinton, he said, “I agree.”

“Now, she’s crazy,” he said, adding, in a reference to former President Bill Clinton, her husband, “Bill is stone cold afraid of her.”

He defended his handling of the coronavirus pandemic, which has killed more than 203,000 people in the United States. He bragged about the speed with which a vaccine was being developed amid widespread criticism that he was politicizing the process in the interests of being able to announce one before Election Day.

“We will crush the virus,” he said. “Our opponents will crush America.”

The rally was interrupted twice by protesters who were booed by the crowd and swiftly removed.

Mr. Trump will face Mr. Biden in Cleveland on Tuesday in the first of three scheduled debates before the election. The president’s rally — which featured his typical, rambling style in which he bounced from topic to topic — offered a preview of his likely approach next week.

He hammered Democrats for allowing violence in cities, characterizing as “anarchists” the people protesting police killings of African-Americans. He lashed out at the news media, calling them “fake,” and accusing journalists of promoting the Democratic agenda.

The president repeatedly denounced Mr. Biden’s approach to China, saying his rival would be weak on trade with Beijing. He also mocked Mr. Biden’s son, Hunter, once again tying the younger Biden to conspiracy theories that have been repeatedly debunked.

Despite steady rain throughout much of the night, Mr. Trump seemed animated by the crowd, an advantage that he will not have during Tuesday’s debate.

One attack that the president seems certain to reprise next week is his criticism of Mr. Biden’s stamina. He repeatedly called him “Sleepy Joe” and rebuked Mr. Biden for not campaigning at more events around the country.