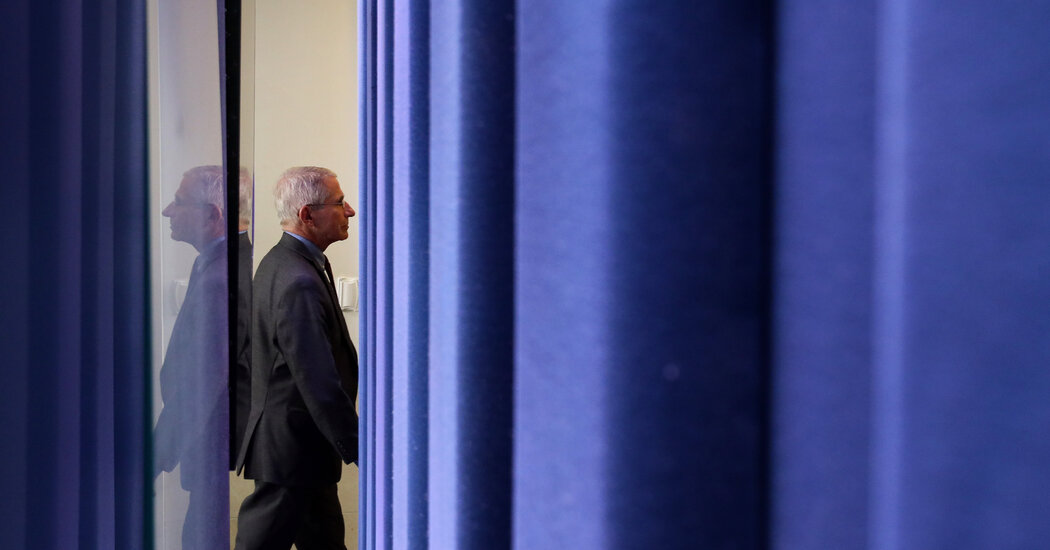 For a moment it appeared as if reality had come home to roost in the White House.

The president, who has long denied the severity of Covid-19, who waved away a question about a thousand Americans dying every day (“It is what it is”), who hawks quackery and discourages preventive measures like mask-wearing, contracted the virus last week, along with several others in his orbit.

Soon, a chaotic, queasily familiar farce ensued. The president’s personal physician admitted misleading the public with his rosy reports on Trump’s health; his chief of staff couldn’t keep his stories straight. Even as confusion persists about the seriousness of the president’s symptoms, when exactly he came down with the virus and how many others he has exposed to it, he breezed out of Walter Reed National Military Medical Center and returned to the White House. On Monday evening, he delivered a macabre video address, triumphantly pulling off his mask and claiming domination over the virus, all the while noticeably struggling to breathe.

In the midst of the clamor and speculation, the occasional forlorn question: Where is Dr. Fauci?

Anthony Fauci has been at the helm of the National Institute of Allergy and Infectious Diseases through the emergence of H.I.V., SARS, avian bird flu, swine flu, Ebola, Zika. He is “America’s doctor,” Michael Specter, a staff writer at The New Yorker, says in his new audiobook, “the essential first biography,” according to its publishers. “We don’t have an actual leader,” Specter said in April. “Fauci is the closest thing.”

Before being sidelined in recent weeks, he was regarded as the adult in the room, with his quaint fondness for facts and evidence-based science. Of recent events, he noted with wry, habitual circumspection: “I think it’s obvious that I have not been involved.”

Biography might be a generous description of this book. “Fauci” faithfully follows Specter’s profile of the doctor published in The New Yorker this spring. The White House tightly controlled his access to Fauci; despite knowing each other for decades, the men were not able to meet in person. It is the story of the public life we receive, delivered in broad, reverent strokes, frank hagiography. Fauci is “the nation’s indispensable man,” “the Enlightenment’s human shield.” (Fauci has paid the price. He and his family have endured death threats from conspiracy theorists accusing him of undermining the president.) There might not be enough fresh revelation or psychological insight to satisfy my nosiness, but Specter shapes the available evidence into a stirring, and very American, morality play.

Fauci was born on Christmas Eve, 1940. The front-page headline in The Times that day read: “President to Give Emergency Facts to Nation on Radio.” A Brooklyn boy, the son of the local pharmacist, he was granted admission to one of New York’s most prestigious high schools, but sports were his first love. At 5-foot-7, however, he found his dreams of a basketball career dashed. The humanities called to him. His family was full of artists, and he took to classical languages and philosophy. Science began to sing to him, too — the thrill of discovery. Medicine could combine the two, he thought — he could interpret science and bring it to people.

He worked in construction while in college. One summer, he took a job building a new library at the Cornell Medical College in Manhattan. On his lunch break, he crept into the school’s auditorium for a quick look. A guard ordered him and his dirty boots out. Fauci told him he would be attending the school the next year. “Right, kid,” the guard laughed. “And next year I am going to be police commissioner.’”

Fauci would graduate first in his medical-school class. From there, he moved to the N.I.H. in 1968, where he has remained. It’s a story of drive, discipline and smooth ascension. The antagonist has yet to arrive.

In the early 1980s, reports began to surface of gay men dying of a form of pneumonia. Although Fauci was quick to raise the alarm and to investigate the role of the immune system in the new syndrome, he became the public face of the medical establishment’s sluggishness and indifference to the plight of gay men, the poster boy for the agency that denied dying men experimental drugs. The playwright and Act Up founder Larry Kramer was relentless in his criticism. Fauci was a murderer, he raged. Fauci was Eichmann.

Fauci did embody the paternalism of medicine at the time, Specter writes. Patients were rarely consulted in their treatment, not even AIDS activists so formidably self-educated about the disease. But their anger made an impression on the doctor. He flinched from it, yet wanted to understand. Fauci began to listen. He went to Act Up meetings. He heard stories of desperation, of men boiling their blood and shooting it back into their veins.

Fauci changed course, confounding his colleagues. He advocated for the activists, and revamping the clinical trial system. He was persuaded by the facts, Specter says, “a vanishing art in this country.”

“They were all New York guys,” Fauci has recalled of the activists. “I had a little affinity to them because I’m a New Yorker. And I said, ‘What would I do if I were in their shoes?’ And it was very clear: I would have done exactly the same thing.” They’re all New York guys in this story — Fauci, Trump, Kramer. The reason to listen to, rather than read, this story is for the texture of the voices, the archival audio that distills the panic and resolve of the era.

Specter’s own voice — a bit breathless, a bit reedy — rather surprisingly turns out to be one of the book’s most effective instruments. On the page, he can be as professionally impassive as Fauci at a news conference. But in the recording, there is no tamping his emotion and exasperation. The book becomes an indictment of Fauci’s great adversary, the adversary he shares with Kramer and with Specter, too. That adversary is not a virus or a particular administration. It’s apathy.

“Our continued existence depends on just how angry you can get,” Kramer wrote in a fiery 1983 editorial, addressing gay men. “Unless we ﬁght for our lives we shall die.” In his milder way, Fauci has been making the same point for years where viral epidemics are concerned. Why aren’t we more prepared? Why isn’t there a universal vaccine for the flu, which kills tens of thousands of Americans each year? A vaccine of this kind could defend against all strains and provide a decade of protection, like a tetanus shot. Where is the political will to make this a reality? Why has America suffered so many lucky breaks — spared the worst of avian flu and SARS — while learning nothing? As incredible as it may be to imagine, this pandemic will pass; will we learn nothing again? How close to extinction must we come? It’s the question Specter himself has posed in his work, that he poses again here, in telling the story of a celebrated physician and the heroic trait of changing one’s mind.