The bridges that help define Chicago’s downtown aren’t raised very often anymore — usually just for a few scheduled minutes to let boats pass on the way to or from Lake Michigan.

But this year, the Chicago River bridges have repeatedly been lifted for a new purpose: to keep people out of the center of the city.

Over the last week, for the second time in three months, Mayor Lori Lightfoot ordered most of the bridges up at night to limit access to the Loop, Gold Coast and surrounding areas after an outbreak of property destruction and unrest.

The move was among a number of measures the mayor announced to protect businesses and reassure residents. But it was the image of the bridges being raised that offered the clearest symbol of Chicago’s divisions.

Our newsletter is written by a ProPublica Illinois reporter every week.

In a time of crisis, in one of the most racially and economically segregated places in the country, the bridges connecting north and south and linking east and west — sides of town that serve as proxies for wealth versus disinvestment — were made uncrossable, like drawbridges over a castle moat.

Longtime Chicagoans say they can’t remember any other time the bridges were raised in the name of crime prevention or public safety. “You’re basically saying you’re protecting one part of the city from another part,” veteran political strategist Delmarie Cobb said.

In many ways, the bridges are a reminder of earlier eras in Chicago. Decades ago, when the river was busy with commercial traffic, the city employed hundreds of bridge tenders. By the 1980s, as river transport declined, bridge tender jobs served largely to reward political workers. Former Alderman Richard Mell once boasted in an interview that he had controlled dozens of public-sector positions, including bridge tenders. Those jobs were coveted because they involved almost no work. 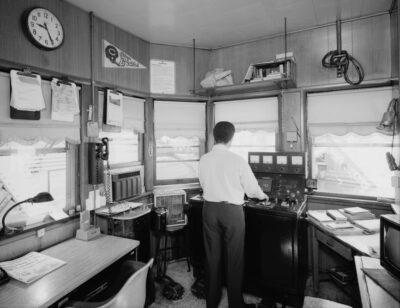 The interior of a bridge tender’s house in Chicago. (Library of Congress Prints and Photographs Division Washington, D.C.)

Lightfoot’s election last year was a sign that Chicagoans were weary of that kind of insider machine politics. As a federal corruption investigation implicated aldermen and wounded other mayoral hopefuls, Lightfoot, making her first run for office, promised a new vision. She touted her past work on police accountability and, as an African American woman from a working-class family, said she would bring a progressive approach to fighting crime, stressing the need to revitalize poor and struggling neighborhoods.

Governing is almost always more complicated than campaigning. As Chicago’s challenges have intensified over the last six months — the pandemic, the economic slowdown, a spike in gun violence, protests over racism and police shootings — Lightfoot has continued to portray herself as both an empathetic progressive and a tough pragmatist. But she’s also delayed or backed away from many of her campaign vows. On public safety issues in particular, she has fallen back on rhetoric and policies that her predecessors employed, promising enforcement crackdowns while blaming other officials she accuses of being soft on crime.

These strategies haven’t addressed the city’s root problems, though they are frequently demanded by residents as well as downtown business interests, whose tax base and political support no mayor wants to lose. And so for decades, the city has focused on containing crime and violence. When it appears to spread to wealthier areas — and areas outside of Black and Hispanic neighborhoods — politicians and columnists start warning that Chicago could go the way of Detroit.

The city’s latest crisis exploded during a chain of events last Sunday and Monday that are still murky. First, on Sunday afternoon, police officers in the Englewood neighborhood on the South Side shot a 20-year-old man who they said had fired at them first. Many residents didn’t believe the police account, and the officers weren’t wearing body cameras that might have recorded the incident.

That evening and into the next morning, hundreds of people gathered downtown. Though police said 400 officers were deployed as soon as they got word of “caravans” heading there to loot, the night was chaotic. Stores along Michigan Avenue and in surrounding areas were ransacked. Police said 13 officers were injured. They arrested more than 100 people.

On Monday morning, Lightfoot said she was shocked and angry, especially since some of the businesses hadn’t recovered from rioting and damage this spring that followed the Minneapolis police killing of George Floyd. She rejected the idea that the latest unrest should be seen as a protest against the police shooting in Englewood.

“These individuals engaged in what can only be described as brazen and extensive criminal looting and destruction,” she said. To the offenders, she vowed, “We are coming for you.”

The mayor said that the city had overcome grave challenges before by standing “shoulder to shoulder, neighbor to neighbor.” But her central message was that it was a time to step up and fight back against criminals, and anyone who didn’t was disloyal to the city. Lightfoot even suggested that the looters were emboldened because violent offenders were able to get out of jail too easily, which was a frequent talking point of former mayors Richard M. Daley and Rahm Emanuel. When a reporter asked if she was saying prosecutors and judges weren’t doing their jobs, she snapped at him. “Don’t try to bait us,” she said.

Later that day Lightfoot announced the measures to restrict access to downtown for the next several evenings, including halting service from public transit trains, closing expressway ramps and limiting entry to five designated access points. And as she did after the unrest this spring, the mayor ordered the bridges raised. 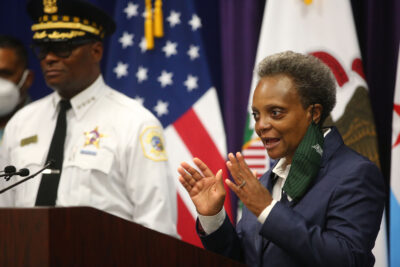 Her announcement both highlighted and exacerbated the city’s political divisions. To Lightfoot’s allies, it was a necessary response to protect Chicago’s economic center. Alderman Chris Taliaferro, who represents the 29th Ward on the West Side, said the move made sense to him as a military veteran and former police officer.

“The best way to secure an area is to limit who can get in,” he said.

Taliaferro acknowledged that the city’s security plans wouldn’t be enough. “The question has to be asked, how do you prevent looting?” he said. “Let’s put our differences aside to start investing in these neighborhoods so we can stop having these press conferences where we’re sad about the looting.”

Lightfoot has committed to bring resources to South and West Side communities, but her plans have unfolded slowly, and she was challenged this week by critics who said the police response Sunday was too hesitant and weak.

Others continue to ask why the city’s response to emergencies always seems to be limited to law enforcement. People who live and work downtown deserve to feel safe — as do people who live in neighborhoods battered by violent crime daily. Instead of demanding loyalty from Chicagoans, Lightfoot could have gone Monday to Englewood and spoken directly to people in need, including young men who are unemployed and cycling through the criminal justice system. How about sending emergency workers there to try and help? How about something different?

As one official told the Chicago Sun-Times during the campaign last year: “We need to work harder to bridge the geographic and racial divides in our city.”

That was Lori Lightfoot.