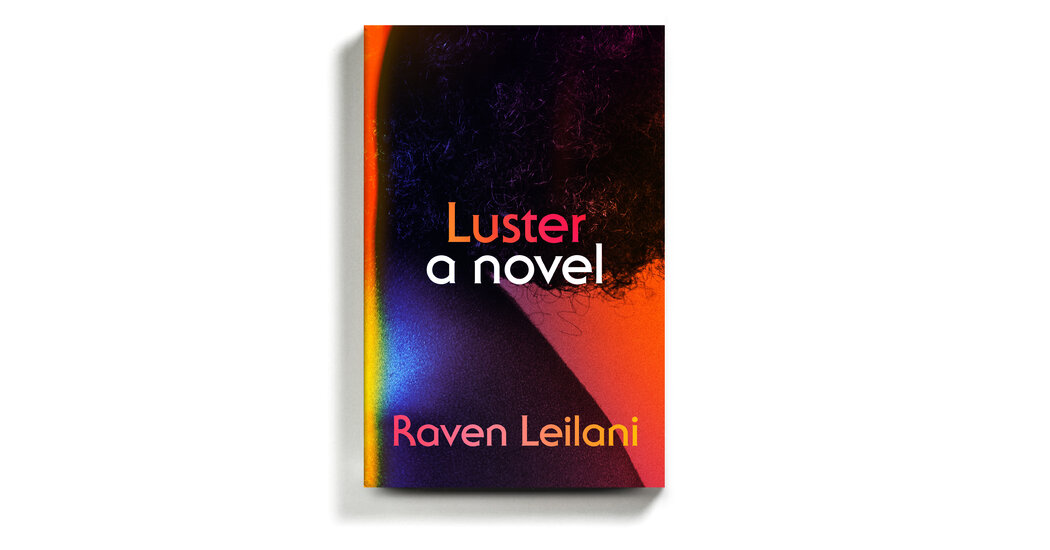 You may know of the hemline theory — the idea that skirt lengths fluctuate with the stock market, rising in boom times and growing longer in recessions.

Perhaps publishing has a parallel; call it the blurb theory. The more strained our circumstances, the more manic the publicity machine, the more breathless and orotund the advance praise. Blurbers (and critics) speak with a reverent quiver of this moment, anointing every other book its guide, every second writer its essential voice.

Take “Luster,” by Raven Leilani, perhaps the summer’s most touted debut. It’s a book that has been so feverishly praised for its boldness, humor and sexual frankness that I was a little crushed to find instead a perfectly agreeable if uneven first novel — brisk and pleasantly pulpy, hobbled occasionally by some seriously mangled prose and pat psychology.

Edie, the protagonist of “Luster,” would never have allowed this to happen. She’s a spectacularly disabused and skeptical 23-year-old Black woman, an assistant book editor, wise to the industry’s excesses. Not that she’s especially engaged with her 9-to-5; she marshals her real creative energy for sleeping with her male colleagues. She’s a sexual adventuress of a joyless sort, not looking for love so much as a kind of annihilation, an escape from the self — “ecstatic rutting and cushy ether of the void,” as she puts it.

[ “Luster” was one of our most anticipated books of the month. See the full list. ]

When we meet her, she’s become infatuated with Eric, a much older white man in an open marriage. The snaky plot takes us from their online courtship to Edie moving in with him and his wife, Rebecca. It’s a tense ménage, initiated by Rebecca — a woman of “freaky competence” who takes a chilly interest in Edie and hopes she might counsel the couple’s 12-year-old adopted daughter, Akila, who is lonely and isolated, one of the few Black children in a white suburb. It’s the strange attraction between Edie and Rebecca — “two magnets of identical charge” — that propels the story.

The sex in the book, marked by a light sadomasochistic edge — Edie pines to be punched, to be dominated — has attracted enthusiastic admiration. Sex has a way of getting all the attention; in this case, it obscures that, page by page, this is less a story about coupling than it is one about work. The spikiest, funniest scenes send up corporate life, with all its feints at inclusion and its complacent racism.

There is nothing on offer like “Luster” — the story of a Black woman who is neither heroic nor unduly tragic. Edie’s a little depressed, a little perplexing to herself, a little needy. She’s thrilled to hear that Eric finds her aloof: “Aloof is a casual lean, a choice. It is not a girl in Bushwick, licking clean a can of tuna.” She is destructive but tender, ravenous for experience but deeply vulnerable — and often wickedly funny: “There are times I interact with kids and recall my abortion fondly.”

[ Read our profile of Raven Leilani. ]

Even when her competitive side is awakened — with her colleague Aria, for example, the only other Black woman on staff, one who has mastered “that unthreatening aw-shucks shtick for all the professional whites” — she shows generosity and a desire for kinship. “Even as we look at each other through borrowed faces, we see each other. I see her hunger, and she sees mine.”

A blurry feeling settled over me as I kept encountering rhyming descriptions and plot points. Edie’s moments of connection with women take identical forms. She shares a cigarette with each of them, and cares for their hair, or tries to. She tenderly dyes Rebecca’s hair, and she teaches Akila how to care for hers, traveling back to Brooklyn to buy the oil and conditioners unavailable in the white suburbs. Other details repeat: Rebecca monitors Akila’s weight in a way that reminds Edie of her own mother: “We were bonded in our mutual hatred of our bodies.”

It’s a book full of pairs, relationships that mirror one another. It is, in fact, a book gleaming with actual mirrors. There are countless references to Edie gazing at her reflection — in dressing rooms, at the bathroom at a party. “Sometimes the face I see doesn’t feel like mine,” she says. That tension creeps into the painting she pursues in her spare time; she’s unable to complete a self-portrait.

This is the governing terror Edie describes in her life, and in the lives of the Black women in the novel: If you are hypersurveilled but unseen, can you lose sight of your own face? Your own desires?

The reader, though, perhaps sees Edie too clearly. Narrative causality flows a little too neatly, the back story filters in to explain Edie as a culmination of her upbringing — her father’s philandering, her mother’s addiction and drive to oblivion. It’s strange, perhaps, to crave more privacy for a fictional character, but I wanted it for Edie. I wanted more mystery, for her to resist being so neatly summed up. In a word she might use, I wanted agency for her, but this story is interested in inheritance, hence those echoes and doublings. Why do the gestures repeat? We use what is available to us, the tools and habits of consolation; we use what we have been taught, on ourselves and on others.

One of Edie and Eric’s few shared interests is disco, the pleasure of which Edie explains slightly apologetically: It’s the “too much,” she says, it’s “the horn section and the cheese.” So it is with “Luster.” Your enjoyment will depend on a tolerance for run-on sentences that strain painfully for profundity (“for a moment I consider the possibility of God as a chaotic, amorphous evil who made autoimmune disease but gave us miraculous genitals to cope” begins one such example), for odd, often indecipherable metaphors. When Edie is discovered snooping in Akila’s room, she describes seeing the embarrassment on the young girl’s face “like seeing an Olive Garden commercial after having already plowed through two bowls of fettuccine.”

The dialogue is flat, mostly expository with an interesting repetition. The characters frame their impatience with Edie — her transgressions, her need — as a generational divide, prefiguring, perhaps, how this book might be read. Novels by young writers tend to attract a strange sort of attention — more anthropological than literary. What does the work of Sally Rooney tell us about “millennial precarity”? What does Kristen Roupenian’s “Cat Person” reveal about gender and power? It’s not that fiction can’t be a rich mine of evidence, but such analyses often go against how and why most people read. Do we go to Ann Petry for a sociological snapshot of midcentury Harlem life? “Anna Karenina” for hot takes on the sexual politics of the Russian landed gentry? We don’t go to novels because they are timely, but because they feel timeless in their treatment of consciousness and emotional life. We don’t want characters to exist as a bundle of symptoms but as full personalities in their rich confusion and ambivalence.

Edie could tell you all that. She enacts it; she’d flinch from being lazily lumped in with any trend or cohort. “Why does it have to be my generation?” she learns to respond. “Why can’t it be me, specifically?”