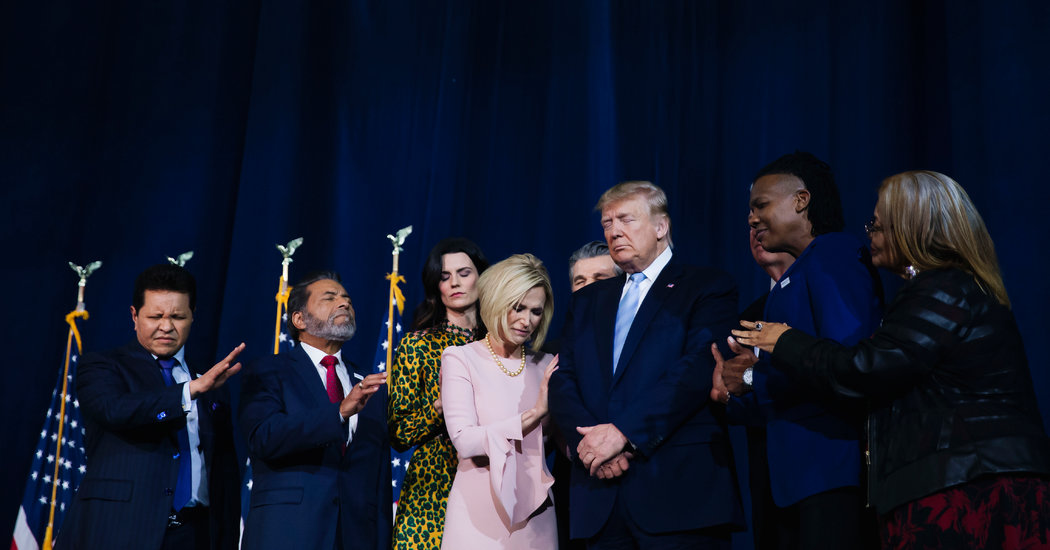 MIAMI — In his first public appearance since the strike that killed Maj. Gen. Qassim Suleimani of Iran, President Trump rallied his evangelical Christian base of supporters on Friday, portraying himself as the restorer of faith in the public square and claiming that God is “on our side.”

Mr. Trump brought to the stage Cissie Graham Lynch, a granddaughter of Billy Graham, the founder of Christianity Today, to offer an implicit rebuke of the magazine’s recent editorial calling for his removal from the White House.

Ms. Lynch’s appearance underscored how sensitive Mr. Trump was about any signs of fracturing in his base; many evangelical allies denounced the editorial, and Ms. Graham Lynch vowed on Friday to help Mr. Trump win re-election. She then welcomed a supporter to the stage who told attendees that they could not trust what the news media wrote about the president.

Mentioning the attack in Baghdad only briefly, the president spent his hourlong speech at Ministerio Internacional El Rey Jesús, a church with a predominantly Hispanic congregation, alternating between his familiar mocking jabs at Democrats, who he repeatedly called anti-religious, and boasting about his own faith-based policies. Saying he would renew the importance of religion and family, Mr. Trump vowed that he would toughen restrictions on abortion and would take action to “safeguard students and teachers’ First Amendment rights to pray in our schools.”

“Where do these people come from?” Mr. Trump said. “These people hate Israel. They hate Jewish people.”

Mr. Trump’s comments were repeatedly met with enthusiastic cheers and chants of “four more years” from the crowded and sprawling church.

“Evangelical Christians of every denomination and believers of every faith have never had a greater champion, not even close, in the White House, than you have right now,” Mr. Trump said. “We’ve done things that nobody thought was possible. Together we’re not only defending our constitutional rights. We’re also defending religion itself, which is under siege.”

Mr. Trump began his remarks by mentioning the killing of General Suleimani and praising the military, on a day when many Democratic officials and presidential candidates have questioned the president’s decision to order the strike and whether he has a broader strategy to deal with potential reprisals from Iran.

“He was planning a very major attack, and we got him,” he added of General Suleimani. “We do not seek war, we do not seek nation building, we do not seek regime change, but as president, I will never hesitate to defend the safety of the American people.”

Mr. Trump excited the crowd by repeatedly thanking them for their crucial support in 2016 and promising that “we’re going to blow those numbers away in 2020.”

Mr. Trump, who rarely made church visits in the 2016 presidential campaign and once mistook the plate offering communion for the collection plate, was described by his favorite pastor and current White House aide, Paula White, as a man of God who is “loyal to a T.”

He again taunted Senator Elizabeth Warren of Massachusetts by referring to her as “Pocahontas” and mocked Pete Buttigieg, the former mayor of South Bend, Ind., who has spoken frequently about his faith, by claiming he had become religious just “two weeks ago.”

“We can’t let one of our radical left friends come in here because everything we’ve done will be gone in short order,” he said. “They can take it away pretty quickly.”

The event had been planned for several weeks, as an opportunity to highlight Mr. Trump’s support from a group of voters who were critical to his victory in 2016.

Mr. Trump has been gripped by anxiety over evangelical voters abandoning him since soon after he took office. He has repeatedly tried to shore up his connection to evangelicals throughout his first term, repeatedly pointing to his move to fill dozens of open federal judicial posts with conservative jurists.

Mr. Trump was surprised when the publication Christianity Today wrote an editorial calling for his removal from office amid the House impeachment inquiry. Roughly 200 evangelicals wrote a letter denouncing the editorial — and several evangelical leaders said it did not reflect a majority view among their voters.

Still, Mr. Trump was troubled by it, according to people close to him.

Outside the rally, supporters said they came to offer their unblinking support for the president. In a city where Hispanics make up 70 percent of the population, many supporters chatted with one another in Spanish as they waited for hours in the blazing Miami sun. The leader of the church, Guillermo Maldonado, made headlines last week when he promised the largely immigrant congregation that undocumented immigrants would not face deportation if they attended the event.

“He’s talking from his heart,” said Michelle Hoff, who came to the rally with two other women from her prayer group. “I can’t remember when we had a president who was honest like he is. Like everyone else, he’s a sinner saved by grace. A lot of people say stuff that they don’t do. He’s doing it.”

Asked if she opposed anything the president said or did, Ms. Hoff said that she only wished he would appoint judges to fully overturn Roe v. Wade and same-sex marriage.

The rally inside the massive church began with energetic Christian rock, with many supporters clad in red MAGA hats dancing and lifting their hands in prayer.

Though all of the invited speakers were popular evangelical leaders and entertainers, many supporters outside were Cuban émigrés who said their primary concern was what they saw as the threat of socialism. Most said they were lifelong Republicans who were more concerned than ever about the Democratic Party gaining more power, citing fears that they would face more government mandates.

“America stands for itself,” said Belkis Gonzalez, 57, a teacher who emigrated from Cuba three decades ago and wore a T-shirt emblazoned with “Socialism sucks,” styled similarly to the logo for Senator Bernie Sanders’s presidential campaign. “We are no longer giving money and free support to enemies of America and instead take strong action. We’re not flaky and shaky anymore.”