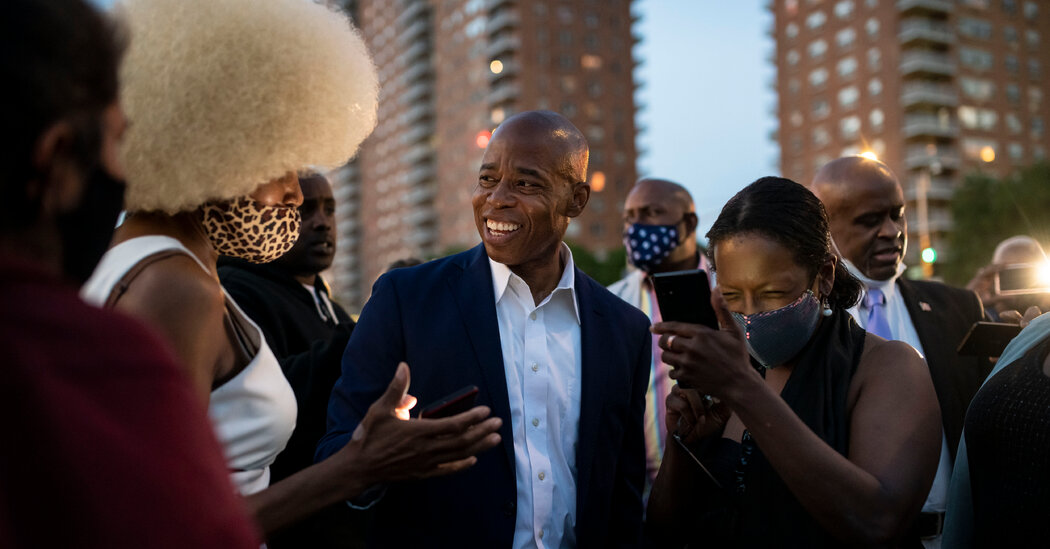 New York City — the nation’s largest city — held its widely watched primaries for city officials on Tuesday. It is broadly believed that whoever wins the Democratic primary in this heavily Democratic city will win the general election.

However, because the city is using ranked-choice voting for the first time, final results and announcements of winners may be weeks away.

That said, there are already some monumental developments in the first-choice tallies: Not only is the leading candidate for mayor, the former police officer Eric Adams, a Black man, but the second leading candidate is a Black woman, the lawyer and activist Maya Wiley.

But wait again: There’s even more. In three of New York’s five borough president races, the leading Democratic candidates are also Black. (Antonio Reynoso, who is leading for the nomination for Brooklyn borough president, is of Dominican descent and identifies as Afro-Latino.)

To round all that up, Black candidates are leading many of the citywide or boroughwide races in New York, the city with the most Black residents — two million — of any city in the country.

If those candidates emerge victorious out of the primaries and go on to win in November, the city will experience an unprecedented moment of Black power, leadership and control.

But as with all opportunities like the ones now at least within reach of these Black candidates, the pros come with a mountain of cons. You need look only to the tenure of the first Black mayor of New York, David Dinkins, which began 31 years ago. He served only one term.

Then, as now, a Black mayor would not be taking the reins of the city during a time of peace and prosperity. Dinkins took office in 1990, while America and the city were reeling from the savings and loan crisis and on the brink of a recession. As Michael Idov wrote in New York magazine in 2008, from 1989 to 1992, “the median home price in Manhattan dropped by more than a quarter, construction declined by a third, and the city lost one-tenth of its jobs.”

And on the front where issues of crime and race met, and in many cases were conflated, one could argue that the mood in the city was just as bad, if not worse.

The city had just come off the arrests of the Central Park Five, and Donald Trump’s full-page newspaper ad calling for New York State to adopt the death penalty after the attack. In that ad, Trump also wrote: “Let our politicians give back our police department’s power to keep us safe. Unshackle them from the constant chant of ‘police brutality.’” All five suspects would be wrongly convicted while Dinkins was in office.

It was after George H.W. Bush won election in 1988 on an anti-crime campaign in which he cited the death of an N.Y.P.D. officer, Edward Byrne, who had been ambushed and killed by a drug gang. Crack had exploded onto the scene in cities across the country. The pump was being primed for unleashing law enforcement to crack down in the city, whatever the cost.

Even the departing Democratic mayor, Ed Koch, would say in 1989, speaking of Byrne’s killing and the killings of other officers, “The pendulum protecting those who violate the law has swung too far.”

Adding to this were the Crown Heights riots of 1991, in which Black residents and Orthodox Jewish residents collided, and Bill Clinton, running for president, attacking Black N.Y.C. rapper Sister Souljah during Jesse Jackson’s National Rainbow Coalition conference, remarks that opened a public dispute with Jackson, which in fact helped Clinton, as he knew it would.

Dinkins tried to institute some police reforms, but the police rebelled. As The New York Times reported in 1992, more than 10,000 off-duty police officers gathered at City Hall to protest. Then the rioting began: “A handful of people, then hundreds, then thousands, broke through police barricades and surged onto City Hall’s steps. From there, the protest degenerated into a beer-swilling, traffic-snarling, epithet-hurling melee that stretched from the Brooklyn Bridge to Murray Street, where several politicians helped stoke the emotional fires.”

Rudy Giuliani, then running to unseat Dinkins, was at the protest, leading the crowd in chants, and as The Times reported, offering “a rousing condemnation of Mayor Dinkins’s treatment of police issues.”

Dinkins would lose re-election to Giuliani, and that would lead to two decades’ rule by Republican and Republican-turned-independent mayors in one of the country’s most liberal cities, a time over which the Police Department would swell and it would institute pernicious racial policies like its unconstitutional use of stop-and-frisk.

I see many worrisome similarities now. Economically, the pandemic was devastating for New York. The city is modeled on density, crowdedness and community. The pandemic upended that model, and the city will struggle to fully recover.

On the racial and social justice fronts, last summer during the protests following the murder of George Floyd, people in New York, like in other cities, genuinely saw an opening for transformational change. But now that window is closing as Democratic politicians whine about “defund the police” costing them elections and violent crime surges in New York and in cities across the country.

There is a strange paradox in politics that keeps playing out: Black people reach the top when things hit the bottom. Remember that Barack Obama was elected when we thought the global economy was about to collapse.

If these Black candidates succeed in this New York City election, the question will be: Can they avoid the pitfalls?