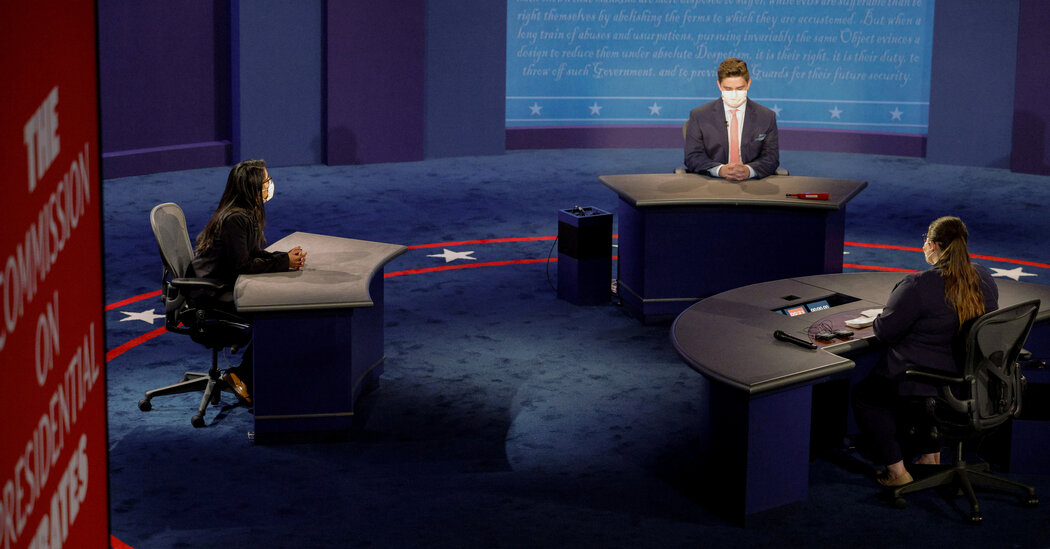 President Trump, fresh from the hospital and still battling Covid-19, tweeted Tuesday morning that he is “looking forward” to his next debate with Joe Biden on Oct. 15. “FEELING GREAT!” he tweeted separately.

Here’s hoping the president is indeed feeling better and will continue to get better still. Regardless, that event should not take place in person. Nor should the other remaining debates, including the matchup on Wednesday between the vice-presidential contenders, Kamala Harris and Mike Pence.

With the coronavirus continuing to spread through the White House and among others close to Mr. Trump, the risk of infecting debate participants and staff is unacceptably high. The involved media outlets and the Commission on Presidential Debates need to immediately shift the events to a virtual format.

The candidates can participate remotely from separate studios, or even from their home studios. But under the current circumstances, it would be irresponsible for the show to go on as planned.

Even before the president fell ill, it was arguably folly to hold face-to-face debates. These events typically take place indoors, lasting upward of 90 minutes. The participants, including the moderators, spend the entire time talking at one another, loudly. Moving the podiums farther apart and reducing the number of attendees, as have already been done, or even moving the debates outdoors, as some are suggesting, isn’t enough to address the risk.

Nor were the safety protocols put in place before the first debate, in Cleveland. Most of the attendees were required to undergo pre-debate coronavirus testing by the Cleveland Clinic. The candidates and their entourages, however, were allowed to operate on the honor system.

Then there was the matter of enforcement. Despite both campaigns agreeing to a requirement that everyone inside the hall wear masks, the president’s family and several of his guests removed their face coverings upon taking their seats and refused to re-mask, despite gentle prodding. The president and his aides also declined to wear masks during an afternoon walk-through of the venue.

Adding to the safety concerns, there are questions about whether, in the weeks leading up to the debate, Mr. Trump was getting tested as frequently as his team said he was. Since the president’s diagnosis, which was announced days after the debate, the White House has refused to say when he last tested negative.

What’s more, testing is no guarantee of safety. This has become increasingly clear with each new illness among Mr. Trump’s inner circle, whose members are said to have been getting tested regularly. It can take up to a couple of weeks for the coronavirus to reach levels detectable by a diagnostic test.

So just because Mr. Pence has tested negative, according to his people, does not mean that he should be at the debate. Per guidelines from the Centers for Disease Control and Prevention, he should be in quarantine after possible exposure to numerous people who were infected. On Tuesday, the director of the Centers for Disease Control and Prevention, Dr. Robert Redfield, issued a letter saying that, based on a description of the vice president’s movements provided by the White House physician Jesse Schonau, Mr. Pence “is not a close contact of any known person with Covid-19, including the president.”

This would be more comforting if the White House were doing comprehensive contact tracing — and if new cases among staffers weren’t still being announced with alarming frequency.

More troubling still: The debate commission said Monday that the Trump campaign had not objected to the Biden campaign’s request that plexiglass dividers be installed for the vice-presidential debate. Mr. Pence’s advisers later said they saw no need for the extra precautions and that negotiations would continue.

This decision reeks of an obsession with wanting things to look “normal” although it is anything but. Even as the White House is melting down, the president and his people continue to prioritize image over safety.

It’s not like this would be the first remote presidential debate. In 1960, the third debate between John F. Kennedy and Richard Nixon was held with the competitors on separate coasts. Nixon was in a studio in Los Angeles, while Kennedy was in a studio in New York. The moderator and a panel of questioners were in a third location, also in Los Angeles.

If split screen technology could be managed back then, surely something can be worked out today. A virtual face-off may not be ideal for sizing up the contenders — but it’s far more important to protect the health of all involved.