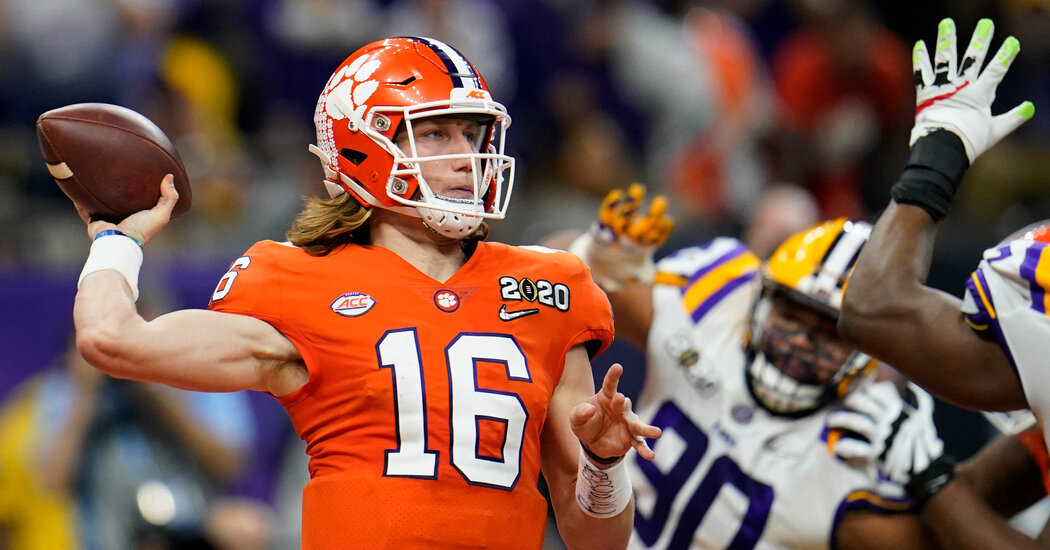 Five years ago this month, a push to unionize college football players ended in defeat.

But with the coronavirus pandemic raging so widely that fall sports seasons had become imperiled, college football’s stars on Monday mounted a ferocious public campaign to salvage their games — and to assert power in a multibillion-dollar industry.

The organization, speed and reach of the pressure campaign suggested that student-athletes, many of them already engaged in an off-season of activism around racial and systemic injustices, were mastering and embracing bold public strategies that could eventually remake the relationship between universities and the people who play sports for them for little more than scholarships.

University administrators and coaches have spent the years since the unionization effort failed in 2015 watching the relative powerlessness of college athletes come under greater scrutiny on Capitol Hill and in America’s statehouses. And while it is not yet clear what the merged #WeWantToPlay and #WeAreUnited campaigns will accomplish, college sports leaders feel they have little choice but to notice and, in some cases, stand alongside the players.

“Players just want to be heard, and I think that schools and people who are leading schools are more likely than ever to listen,” said Greg McElroy, an ESPN analyst who was Alabama’s starting quarterback in 2009 and 2010.

The five most influential conferences in college sports — the Atlantic Coast, the Big Ten, the Big 12, the Pac-12 and the Southeastern — have modified their plans for football, changing start dates, season lengths and formats, but have not canceled the sport outright for this year.

Leaders of Big Ten schools, like Michigan, Nebraska, Ohio State and Penn State, spent the weekend considering the fate of their season, scheduled to start on Sept. 3, but a conference official said Monday afternoon that the presidents and chancellors had not voted on a new plan. The official spoke on the condition of anonymity to discuss the private talks.

The sudden push from players, though, some of whom drew the public support of their coaches and universities as Monday went on, threatened to complicate the Big Ten’s deliberations.

In the statement they shared on Monday, players from across the country, including quarterback Trevor Lawrence of Clemson — who is the front-runner to be the No. 1 selection in the next N.F.L. draft — as well as Justin Fields of Ohio State and Najee Harris of Alabama, called for universal medical protocols and for players to be allowed to opt out of the season without surrendering a year of their eligibility to play college sports. They also said they wanted to use their “voices to establish open communication and trust between players and officials.”

At the statement’s core, though, was an eight-word declaration that directly challenged higher education leaders who fear the consequences of sanctioning a contact sport during a pandemic: “We all want to play football this season.”

President Trump, who has pushed for the resumption of sports as a part of his quest to reboot the economy and to depict the pandemic as controlled, retweeted Lawrence’s post and added, “The student-athletes have been working too hard for their season to be cancelled.”

In a sport of largely decentralized governance, the movement for stronger, uniform health protections began just more than a week ago when a group of Pac-12 players threatened to opt out of the season if safety demands, as well as others in a lengthy list, were not met.

But by Sunday, after Lawrence posted an impassioned plea for a season on Twitter, leaders of the Pac-12 group realized they had a problem. They, too, wanted to play but they sensed that the issue was being used to hijack the debate and divide the players. Darien Rencher, one of Lawrence’s Clemson teammates, sent a Twitter message to Dylan Boles, a senior defensive end at Stanford who is a member of the Pac-12 unity drive.

They convened a call with Lawrence, whose team reported dozens of positive tests yet pressed on with workouts on its South Carolina campus. The players soon came to a conclusion: They wanted to play and wanted all players to have a voice in how it could be done as safely as possible. They hustled up a group call with players from other conferences, who were in agreement and began crafting a statement with a handful of ideas.

Boles said at the core of the conversation was that it was the duty of players who were confident in their programs’ virus protocols to stand up for athletes in programs where such trust did not exist.

Sports and the Virus

Here’s what’s happening as the world of sports slowly comes back to life:

“Some fans were trying to create a divide and pit two movements against each other,” Boles said, adding: “It created a division that wasn’t supposed to be there.”

The players initially planned to release their statement later Monday morning, but sensed the importance of doing so as soon as possible. As the dozen or so players hashed out the details, Dallas Hobbs, a defensive end at Washington State who dabbles in graphic design, assembled it to be posted on social media.

“I found out I only had 20 minutes to save the world,” Hobbs said. “I had to get everything together and grind it out.”

Lawrence posted the proposal a minute after midnight, after hours of social media speculation that the season was teetering toward collapse. By sunrise, the internet was awash in rising support for the students.

Players have described an array of motives for their varied approaches to a possible season. Some believe that tightly regulated football programs can manage the virus and its dangers, or do not want to see years of hard work sacrificed. Others fear that a canceled season might jeopardize the prospects of older players who might have used a final year of college football to show improved skills before the N.F.L. draft.

“I hope their voices are heard by the decision makers,” Joe Burrow, who won last season’s Heisman Trophy as the Louisiana State quarterback and was the top pick of this year’s N.F.L. draft, wrote on Twitter. Nodding to his career before his breakout season in 2019, he added, “If this happened a year ago, I may be looking for a job right now.”

Lawrence, who played opposite Burrow in last season’s national championship game, argued over the weekend that players were “more likely to get the virus in everyday life than playing football.”

“Having a season also incentivizes players being safe and taking all of the right precautions to try to avoid contracting covid because the season/ teammates safety is on the line,” he wrote. “Without the season, as we’ve seen already, people will not social distance or wear masks and take the proper precautions.”

Some health experts and sports executives are deeply skeptical of those arguments, and some players have been, too. Last week, Connecticut, an independent in football, canceled its season, and its players said in a statement then that they had “many health concerns and not enough is known about the potential long-term effects of contracting Covid-19.” On Monday, the Mountain West Conference announced “the indefinite postponement” of fall sports.

And some schools have struggled to keep their athletes in compliance with public health guidelines. Last week, Louisville paused workouts for four of its teams after 29 players tested positive for the virus, with many of the cases linked to an off-campus party.

Regardless of the outcome of the debate about the football season, Monday’s burst of activism was certain to intensify the protracted debate over the rights of players, an issue that has been the subject of lawsuits, legislation and congressional hearings.

The players did not immediately detail how they might try to organize, beyond saying that they ultimately favored a “college football players’ association.”

Unionization could face substantial hurdles. In the absence of a recognized union with the power to seek a collective bargaining agreement, players could turn to, or create, an advocacy group with the aim of shaping public opinion and policy.

“Ultimately, college athletes don’t need a union to effect change,” said Gabe Feldman, the director of the Tulane Sports Law Program. “It may be more effective in a union, but a union is not necessary for college athletes to exercise leverage over schools, conferences and the N.C.A.A.”

Talks between players and administrators have not always proven successful. Last week, Pac-12 players found a meeting with Larry Scott, the league’s commissioner, unproductive and said he had been dismissive of their concerns and unwilling to meet again.

On Monday, Boles said he hoped future conversations with the power brokers of college sports would be more fruitful, especially after years of stymied efforts by athletes to assert themselves, like the unionization drive at Northwestern that failed in 2015, just as many of today’s top players were considering where to enroll.

The way athletes urgently came together on Sunday night, Boles said, demonstrated a breadth to their unity that had not existed before.