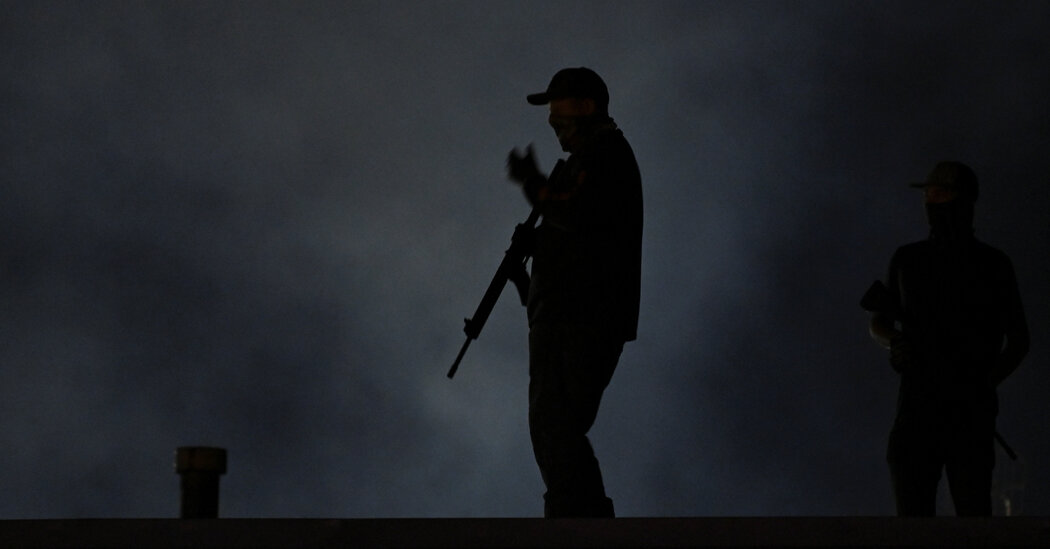 His acquittal has reinvigorated support on the right for armed responses to racial justice protests and unrest.

On Friday, as Kyle Rittenhouse stood in a courtroom in Kenosha, Wis., awaiting the verdict in his trial, a large bald man with mutton chop sideburns sat in a pew several rows behind him. As a court clerk announced Mr. Rittenhouse’s acquittal on all charges, a faint smile passed across the man’s lips.

“I’m walking on sunshine,” the man, Kevin Mathewson, said the next day. A local private investigator and former city alderman, he had attended every day of the trial, in which he had more than a passing interest.

Mr. Mathewson had become a prominent and divisive figure in Kenosha. Days after George Floyd was killed by a police officer in Minneapolis, Mr. Mathewson had created an organization called the Kenosha Guard, an armed group that declared its intent in a Facebook post “to deter rioting/looting” amid racial justice demonstrations in Kenosha. In August 2020, after the police shooting of a Black man named Jacob Blake brought a wave of protests and rioting to the city, Mr. Mathewson had written on the Guard’s Facebook page urging Kenoshans to take to the streets with guns to defend the city. His Aug. 25 post went viral, drawing thousands of RSVPs and comments threatening violence.

Mr. Mathewson’s call to arms was one of several in Kenosha that day, which collectively brought dozens of mostly white armed paramilitaries into the streets of the city’s small downtown, creating a heavily armed confrontation with demonstrators that came to a head with the Rittenhouse shootings. Mr. Mathewson went home hours before the shootings, and no evidence ever connected Mr. Rittenhouse — whom Mr. Mathewson said he had never met — to his Facebook post. But his proximity to the incident led to him being banned from Facebook, where his Aug. 25 post had been flagged repeatedly for violating the platform’s ban on militia activity and had left an aura of suspicion around him.

The Rittenhouse shootings, and the clash between paramilitaries and demonstrators in which they occurred, represented the lethal culmination of this idea: that the United States had reached a point of crisis in which citizens were required to take up arms to defend it from their fellow citizens. It was an idea with deep roots in American history, and also one deeply entangled with the country’s legacy of racial conflict.

White vigilante groups, some of them openly white supremacist, responded violently to unrest in Black communities in multiple cities in the late 1960s, often with the acquiescence or active support of local police. Photographs of armed Korean American business owners in Los Angeles defending their properties during the 1992 riots have been touchstones for Second Amendment advocates for years, and they were circulated again as social media memes after the Rittenhouse verdict.

In 2020, this strain of armed vigilantism was reactivated by the struggles of mostly Democratic state and local governments and law enforcement in responding to rioting and prolonged unrest in several major cities after Mr. Floyd’s death. And it was fanned by conservative media figures and Republican politicians, who encouraged their audiences and supporters to see the failure to preserve order as part and parcel of the Democratic agenda.

“I’m really concerned about the gun fetish, and those who really buy into the ‘good guy with a gun’ scenario,” Anthony Kennedy, an alderman in Kenosha, said after the verdict. “Those people who see the breakdown of society, think they need to be armed — this just validates their worldview. And that’s bad for all of us.”

Mr. Rittenhouse’s trial was an important test of how the legal system would address one of the signature developments that emerged amid the violent fracturing of American politics in 2020: the presence of armed counterprotesters at racial justice demonstrations, both peaceful and otherwise. In some cases, the armed groups and individuals were openly opposed to, and antagonistic toward, demonstrators. In others, they presented themselves as a volunteer security presence for private or government buildings, or even as neutral peacekeepers, though they were rarely welcomed as such by demonstrators.

Their actions were not without precedent. Members of the Oath Keepers militia were present in Ferguson, Mo., after the police shooting of Michael Brown there in 2014. Elizabeth Neumann, a former assistant secretary for counterterrorism and threat prevention at the Department of Homeland Security, where she tracked domestic extremism, argued that such groups represented a particularly elusive kind of security threat, in part because the armed groups themselves did not necessarily see themselves that way.

“An Oath Keeper, they see themselves as being there for protecting,” she said. Their mind-set, she added, is that “they’re there in case there’s a bad day — and if the government keeps violating our rights, there might come a day when they need to launch a revolution.”

The armed groups that materialized in Kenosha appeared to span a range of motivations. Some were highly ideological, including members of the anarchic far-right Boogaloo movement, who could be seen in footage from several nights placing themselves between demonstrators and the police and guarding private property. Others saw themselves as simply defending local businesses or providing a sort of heavily armed neighborhood watch in the absence of an overstretched police department.

Doug Flucke, who stood watch as part of a group outside a restaurant in another part of Kenosha the night of the Rittenhouse shootings, said in a Facebook message last month that his group was “ready to help and stand next to our Blue to show them that they had support from their community and they weren’t alone.”

Prominent media and political personalities on the right in Wisconsin and elsewhere had discussed throughout the summer the need for this kind of community-level response to what they depicted as Democratic failure in the face of rioting. Appearing on a talk radio program the day after the Rittenhouse shootings, David Clarke, the former Milwaukee County sheriff and a right-wing political celebrity, said that he did not advocate “some of the stuff that’s starting to happen” but that he would not condemn it either, and he advised listeners to have a plausible argument for their actions in such cases.

“Think about it, have a plan,” he said. “You have to act reasonably. Then you’re going to have to articulate what you did afterwards.” After the Rittenhouse verdict on Friday, Mr. Clarke told Newsmax that he had to “hold back tears” after the verdict was read. “I’ve talked to this young man,” he said. “He’s been under a lot.”

A 2013 Urban Institute study found marked disparities in how often homicides were deemed justifiable by juries based on the race of the parties involved. And “stand your ground” laws, which codify a particularly expansive right to self-defense, have played a role in the acquittal of defendants accused of killing Black people who were unarmed in several high-profile cases, most notably in George Zimmerman’s shooting of Trayvon Martin, a Black teenager, in 2012. Three white men currently on trial in Georgia for the murder of Ahmaud Arbery — a 25-year-old Black man who was unarmed, and whom the men pursued through their neighborhood — have similarly claimed self-defense.

Mr. Rittenhouse’s detractors rushed to cast his acquittal as part of this pattern. “This system isn’t built to hold white supremacists accountable,” Representative Cori Bush of Missouri, a Black Lives Matter activist elected to Congress as a Democrat last year, wrote on Twitter shortly after the decision.

But the Rittenhouse shootings, though they happened after he brought an assault-style rifle to the aftermath of a racial justice protest, diverged in significant ways from that template. The three men Mr. Rittenhouse shot, two of them fatally, were all white, and the shootings occurred in a genuinely chaotic and violent situation, with deadly weapons present on all sides.

His acquittal was considered a likely outcome by legal analysts, who had regarded the prosecution’s path to conviction on homicide charges as exceptionally steep because it would have required demonstrating beyond reasonable doubt that Mr. Rittenhouse had not acted in self-defense. “I think this is not a terribly surprising verdict,” Michael M. O’Hear, a professor at Marquette University Law School in Milwaukee, said.

“I don’t think the kid was a Klan member,” Raymond Roberts, a local data analyst and activist, said of Mr. Rittenhouse. “It was just the privilege of it: ‘Because I’m white, I can walk around in tac gear with a rifle, and the police will say thank you.’”

In June 2020, Mr. Roberts, who is Black and an Army veteran, had organized an armed demonstration to counter Mr. Mathewson’s Kenosha Guard, calling on fellow veterans to openly carry firearms in solidarity with racial justice demonstrators. But at the event, Mr. Roberts had chosen to carry a permitted concealed handgun rather than a rifle — a common choice among local racial justice activists who armed themselves at demonstrations in Kenosha that summer.

To Mr. Roberts, the Rittenhouse verdict was a stark reminder of who was likely to be seen by the police and jury members as “helping” in a situation like the one Mr. Rittenhouse placed himself in, and who was not. “I have to be honest and say I’m angry because I’m jealous,” he said.

“That 17-year-old white boy, this country belongs to him more than it’ll ever belong to me. It doesn’t matter how many years I did in the Army, how much taxes I pay. I can’t do what he did. I can’t walk around in the middle of the night open carrying,” Mr. Roberts said.

Mr. Kennedy, the alderman, who is also Black and an Army veteran, agreed. If he had been in Mr. Rittenhouse’s situation, “My ass would’ve been dead on the street,” he said. “I wouldn’t have been arrested.”