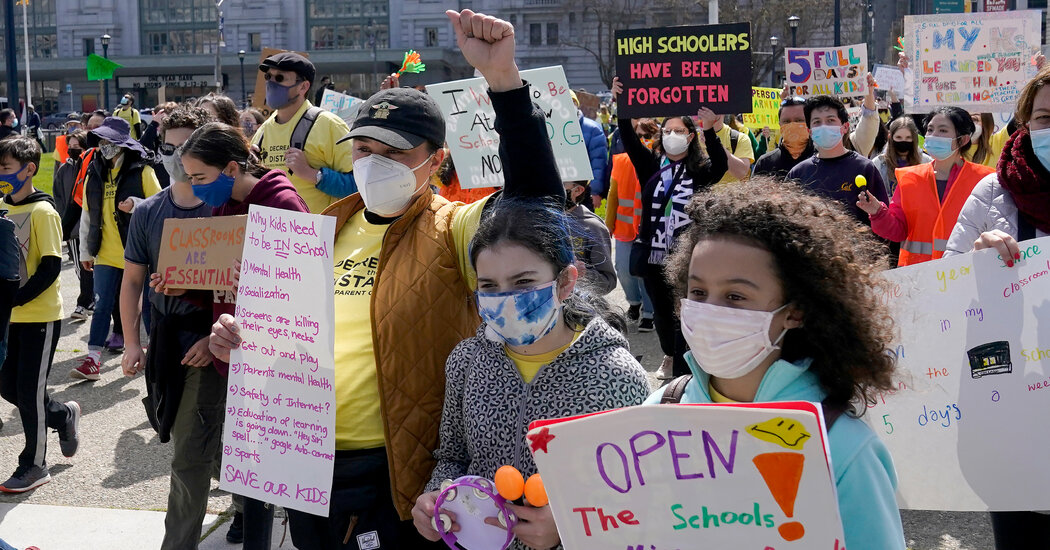 The San Francisco school board has infuriated parents and the mayor. Now it has descended into chaos over accusations of racism.

SAN FRANCISCO — The pandemic has brought grinding frustrations for parents, educators and students across the country. But perhaps no place has matched San Francisco in its level of infighting, public outrage and halting efforts to reopen schools.

In February, the city sued its own school system, which has been entirely remote for a year, and board of education, charging they were violating state law by not resuming in-person instruction.

Soon after, two parents infuriated by the school board’s decision to rename 44 schools, even as it kept them closed, started a drive to recall three of the board members. Some 9,000 people have joined the campaign’s mailing list, and they are expected to begin collecting signatures soon.

Then critics of the board unearthed four-year-old tweets written by the board’s vice president in which she accused Asian-Americans of sidling up to white Americans to get ahead without confronting racism, comparing them to slaves who benefited from working inside a slave owner’s house. More than a third of the district’s students are Asian-American.

Tumult turned to all-out war. Within days, state legislators, the mayor and two members of the board itself had joined a rapidly growing chorus demanding that the vice president, Alison Collins, resign.

Ms. Collins has refused to do so, but on Thursday the board voted, 5-2, to strip her of her roles on committees and of her vice presidency, leaving the board bitterly divided.

Amid the chaos one thing has remained clear: A large share of the city’s public school students are unlikely to see the inside of their classrooms this academic year.

The district has set dates in mid-to-late April to start bringing back elementary school students and some high-needs older students, but there is no plan yet for a majority of middle or high school students to return. At the same time, all of the roughly 10,000 teachers and staff members in the district have been offered vaccinations.

“The No. 1 focus for this school board should be getting kids of all grades back in school as quickly as possible,” said Dennis Herrera, San Francisco’s city attorney, whose request for an order to force the district to produce a reopening plan was denied by a judge on Thursday. “Instead here we are subjected to a political drama in San Francisco, making the school district a laughingstock nationwide.”

Critics of San Francisco’s brand of liberal politics have long pointed to a disconnect between elected officials’ lofty rhetoric about social justice, and the reality of a city where fabulous wealth lives side by side with extreme poverty and despair, exemplified by the homelessness, drug abuse and mental illness on the city’s streets.

In the realm of education, the pandemic has reinforced the notion of a city divided by wealth and race. About one-third of the city’s schoolchildren, many of them white, go to private schools, one of the highest rates of any major city in the United States. Many of those private school students have been sitting in classrooms for months while public school students, who are disproportionately Black, Latino and Asian-American, have spent the year in virtual classes.

Data released by the district suggests that remote learning has increased racial achievement gaps. Attendance has fallen among African-American and Pacific Islander students, as well as homeless students.

Even so, not all parents in the district are eager to send their children back to school in person: About a third have chosen to keep their children in distance learning when elementary schools reopen.

Adding to the district’s woes, it is facing a steep budget deficit and now risks losing even more funding as enrollment declines. Data from the district shows a roughly 10 percent drop in the number of students submitting applications for kindergarten for 2021-22.

As early as last summer, it was clear that the board had no appetite for reopening schools. When the superintendent, Vincent Matthews, proposed using grant money to hire a consultant to help devise a reopening plan, the board voted against it, in part because the consultant had connections to charter schools.

So schools remained closed all fall, even while San Francisco enjoyed some of the lowest virus rates in the country. But the board proceeded with a plan to rename 44 schools whose names were deemed to be associated with slavery, genocide or other injustices.

The plan was criticized for the sloppiness of the research process, which, among other things, wrongly accused Paul Revere of seeking to colonize the Penobscot people. Mayor London Breed blasted the board’s focus on renaming schools while they remained closed as “offensive.”

In early February, shortly after taking a final vote to rename the schools, the board took on another controversial issue, voting to permanently change the admissions process to Lowell High School, the city’s most elite school, from one based primarily on grades and test scores to a lottery system.

As has been the case with selective public high schools in cities like New York and Boston, Lowell has been a source of both pride and contention in San Francisco. Its student body is majority white and Asian-American, while Black and Latino students are underrepresented, despite efforts to diversify the school.

The board had voted in the fall to change Lowell’s admissions process to a lottery-based one for one year only, and data released this week showed that the share of Black and Latino students among those admitted jumped sharply.

Soon after the Lowell vote, Siva Raj and Autumn Looijen, a couple who said they were angry about the board’s decision to devote time to the renaming process rather than reopening schools, began a campaign to recall Ms. Collins, plus the board president, Gabriela López, and a third member of the board, Faauuga Moliga. (Because of the rules around recall elections, the other members are not eligible to be recalled, Mr. Raj said.)

“We saw that the school board was actually downright dismissive, almost contemptuous, of parent input,” Mr. Raj said. “They didn’t want to hear from us.” (Mr. Raj has two sons in San Francisco public schools; Ms. Looijen’s children attend school in another Bay Area district.)

A day after the recall campaign launched publicly, the board paused the renaming effort.

On March 18, a volunteer moderator of the recall group’s Facebook page, a Lowell graduate named Diane Yap, discovered Ms. Collins’s tweets. The recall group tweeted them out that evening.

In the thread, from Dec. 4, 2016, Ms. Collins, who is Black, wrote she was “looking to combat anti-black racism in the Asian-American community” at her daughter’s mostly Asian-American school, then complained about what she saw as many Asian-Americans’ refusal to confront racism.

“Many Asian Am. believe they benefit from the ‘model minority’ BS,” she wrote, referring to a stereotype of Asian-Americans as being compliant overachievers. “They use white supremacist thinking to assimilate and ‘get ahead.’”

Ms. Collins went on to question whether Asian-Americans were opposed to President Donald J. Trump, who had been elected a month earlier. And she compared Asian-Americans to slaves who had the advantage of working inside a slave owner’s home instead of doing more grueling labor in the fields. She used asterisks in her tweet to mask an anti-Black racial slur.

The tweets were resurfaced two days after the spa shootings in Atlanta, where six of the eight victims were women of Asian descent, deepening fears of anti-Asian violence. Within hours, there were calls for her to resign.

Ms. Collins issued a statement saying that her words were taken out of context. “For the pain my words may have caused I am sorry, and I apologize unreservedly,” she said.

At a board meeting on Tuesday, Ms. Collins said she would continue her work on the board.

Asian-American students and parents who called into the meeting fulminated against Ms. Collins and other members of the board, their voices cracking with emotion.

“This board is becoming a case study for performative, shallow activism and hypocrisy,” said one caller who identified himself as a student in the district.

Ms. López, the board president, has defended Ms. Collins, and voted against the measure stripping her of her title and committee assignments. She declined to comment, and Ms. Collins did not respond to requests for comment.

The Rev. Amos C. Brown, the pastor of Third Baptist Church and the president of the San Francisco chapter of the NAACP, said in an interview that he believed that the criticisms of Ms. Collins were disingenuous and driven by people who wanted to reverse the admissions change at Lowell High School.

And while he said Ms. Collins had chosen unpalatable words, he suggested that her comments contained some truth.

“Let’s face it, in this society, you do have certain people — not all, not all, certain people — who feel that they are a part of this oppressive oligarchy, and they do not persistently work with the underdog, the marginalized, but they only come around when there’s something of their vested interest,” he said.

But Laurence Tribe, a Harvard law professor and an alumnus of the San Francisco public school system, said the board had used “cultural distractions” as a way of covering up its inability to get schools reopened.

“It’s clear,” he said, “that the internecine conflict among relatively privileged liberals sometimes leaves behind people that they genuinely believe they are concerned about.”