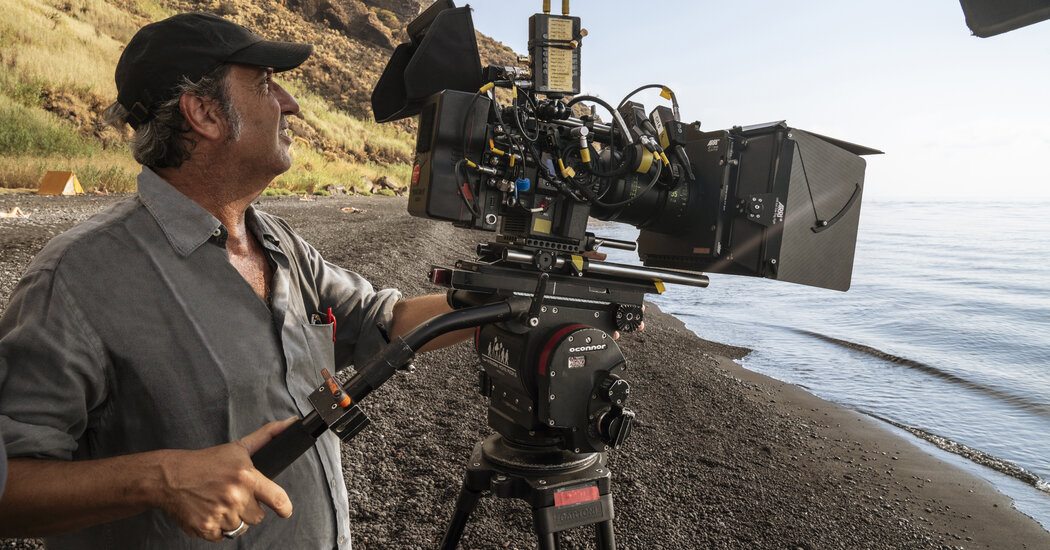 When he was younger, the Italian director was “skeptical” about autobiographical movies. Ten years ago, that changed, and he started work on “The Hand of God.”

NAPLES, Italy — Paolo Sorrentino, on the terrace of the Grand Hotel Vesuvio with a cigar in hand, gestured expansively out at the view of the bay before him. “Naples is so beautiful, but it’s so difficult to capture it or grasp it,” he said. “I decided not to try, and just to tell the story of the characters.”

That story, in Sorrentino’s sprawling new autobiographical movie, “The Hand of God,” is a coming-of-age tale in which we find Fabietto Schisa (Filippo Scotti), a shy teenager meandering happily through his native Naples, comfortably surrounded by his boisterous family, and preoccupied by sex and soccer. Then everything changes. Unhappy and introspective, he looks for new meaning and purpose, and by the end has embarked on a nascent career as a filmmaker.

The movie, which began streaming on Netflix on Wednesday, is being mentioned as a contender for best international feature at next year’s Oscars, the award Sorrentino won in 2013 with “The Great Beauty.” “The Hand of God” also marks the director’s return to his hometown for the first time since his 2001 debut, “One Man Up.” Writing in The New York Times, A.O. Scott called “The Hand of God” “a beautiful tautology: a true-to-life movie about a life made for movies.”

“When I was younger, I was very skeptical about any attempt to make an autobiographical film,” Sorrentino, 51, said, speaking in Italian through a translator. “I started thinking about this 10 years ago, when I realized that my own life experience could be cinematic.”

He spent years gathering memories about his family, friends and parents, he said, before writing the screenplay in his typical process: very fast, taking “not longer than two weeks,” using the notes on the facts, ideas and characters, and possible dialogues that took years to accumulate. “I have to have 3,000 ideas, then skim down until I have the cream,” he said.

“The Hand of God” was no more difficult to write, he added, than any other script, apart from the psychological issue of “my own shyness and secretiveness.”

“It’s not a secret that I chose a profession behind, not in front of, the camera,” he said.

Filippo Scotti, the 21-year-old Italian actor who plays Fabietto, said that he had prepared for the role by asking Sorrentino what music he had listened to and which films he had watched as a teenager.

“The first day of the shoot, I remember I did a scene about 15 times. Then I thought, I am focusing on Paolo’s life, and I need to focus on Fabietto’s life. After that, it was easier,” Scotti said. “To have the thought, ‘I am playing him’ — it’s a kind of nightmare!”

Although the film is based on the events of Sorrentino’s youth, and his memories of ’80s Naples, it is also partly fictional, the director said. “When I write, I start believing my own lies, to the point when I’m no longer able to distinguish between what is true and false,” he said. “Watching the film again last night here in Naples, I realized how many lies it contains.”

The movie opens with a mysterious encounter between a beautiful woman (Luisa Ranieri) at a bus stop, and a man who claims he is San Gennaro, the patron saint of Naples. (The other, unofficial patron saint of Naples is the Argentine soccer star Diego Maradona; the movie’s title refers to his description of a goal he scored in the 1986 World Cup.)

The surreal, hallucinatory images of that opening sequence, including the portrayal of a mythical figure called the Little Monk, which echo throughout the film, are techniques that are characteristic of Sorrentino’s work, but also, he said, tropes that are deeply true to his hometown.

“In Naples, the dogma of Catholicism is somehow structured upon a very imaginative and fantastical creativity,” Sorrentino said. “God is too far away and so you pray to your dead parents and Maradona and saints who feel close to you.”

These extraordinary images and conjunctions are what distinguish Sorrentino as a filmmaker, said Toni Servillo, who plays Fabietto’s father in “The Hand of God” and has starred in five other Sorrentino movies, including “The Great Beauty.”

Sorrentino has “the gift of creating visuals, images, situations that are completely surprising,” Servillo said in a video interview. “That’s the ability of a unique artist; to suggest something you have never thought of.”

Jude Law, who worked with Sorrentino on both “The Young Pope” and “The New Pope,” said that the director would spend a long time looking for “the right way” to shoot a scene. “He creates beautiful and elegant camera moves,” he said, “which are so effective for an actor, because you understand where he is putting his eye, where an audience is looking.”

Sorrentino said that he became passionate about film at the age of 17 or 18. “I thought it must be beautiful to do something that combined music, images, stories,” he said, though at the time he was studying economics at university and his family had very little interest in art or culture. But he began to volunteer on films that came to shoot in Naples, and he met the celebrated director Antonio Capuano (played in “The Hand of God” by Ciro Capano) “just as it happens in the movie.”

Five Movies to Watch This Winter

1. “The Power of the Dog”: Benedict Cumberbatch is earning high praise for his performance in Jane Campion’s new psychodrama. Here’s what it took for the actor to become a seething alpha-male cowboy.

2. “Don’t Look Up” : Meryl Streep plays a self-centered scoundrel in Adam McKay’s apocalyptic satire.  She turned to the “Real Housewives” franchise for inspiration.

3. “King Richard”: Aunjanue Ellis, who plays Venus and Serena Williams’s mother in the biopic, shares how she turned the supporting role into a talker.

4. “Tick, Tick … Boom!”: Lin-Manuel Miranda’s directorial debut is an adaptation of a show by Jonathan Larson, creator of “Rent.” This guide can help you unpack its many layers.

5. “The Tragedy of Macbeth”: Several upcoming movies are in black and white, including Joel Coen’s new spin on Shakespeare’s “Macbeth.”

He began to write screenplays, and won an award for “One Man Up.” “We found the small amount of money needed to make a film,” he said. “It was an obsession to do it.”

Sorrentino has written his own screenplays ever since, and his subjects have ranged widely, including politics, via the Italian prime ministers Giulio Andreotti (“Il Divo”) and Silvio Berlusconi (“Loro”); Catholicism, in the HBO series “The Young Pope” and “The New Pope; and the state of Italy, seen through the eyes of a world-weary journalist, Jep Gambardella, in “The Great Beauty.”

Servillo said that “The Hand of God” reminded him “of the simplicity, the immediate emotions that were so typical of ‘One Man Up,’ the first film we shot together,” but that over the years, what had improved was Sorrentino’s “ability as a writer, the invention of character and the brilliance of the dialogues.”

The script was the principal source for character, said Teresa Saponangelo, who plays Fabietto’s mother in the film. “Paolo said very little about his mother, other than that she was very funny, a prankster and full of life,” Saponangelo said, adding that she had inferred the many years of her character’s suppressed pain over her husband’s affair, expressed in a startling scene midway through the movie.

“Paolo isn’t the kind of director who tells you to use a specific tone or express an emotion,” she said. “He builds the scaffolding, then you move alone with the freedom and trust he gives you.”

One lesson Sorrentino will take from “The Hand of God,” he said, is “a new way of telling stories that is simpler and brings about decent results.” After nine films, he added, “you become bored with what you are familiar with, it becomes mannered.”

Asked whether making the film had been therapeutic, Sorrentino said he thought so. After writing and thinking about these events of his youth, he said, “my pain and suffering that has been with me all my life is not so interesting.”