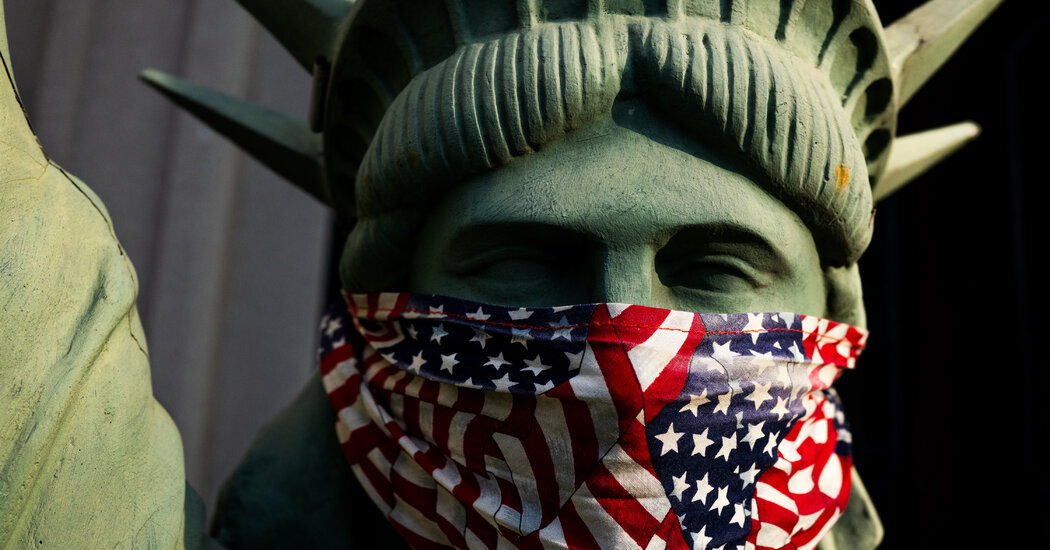 Nov. 13, 1950. An Italian ocean liner makes its way into New York Harbor after a 13-day voyage from Genoa. Passengers, many of them in tears, pack the deck as the ship glides past the Statue of Liberty. After the devastation of the war, they’ve made it to America — to a country that, for the immigrants aboard, represents safety, freedom, abundance and hope in an otherwise broken world.

Among the immigrants are my grandmother Nina, a refugee who has already fled Russia, Germany and now Italy, and her 10-year-old daughter, Xenia — my mother. They are beneficiaries of an expansion of the 1948 Displaced Persons Act, the first version of which Harry Truman nearly vetoed because, while letting in 200,000 European refugees, it was written in a way that was intended to exclude Jews and Catholics.

Imagine that: An American president who decries an immigration bill because, as he wrote in his signing statement, it is “flagrantly discriminatory” and “mocks the American tradition of fair play.”

“There was a sweetness in America back then,” my mom tells me as we chat about this year’s presidential election and she recalls the country as it was when she arrived. “That sweetness seems totally gone.”

My mom, who calls herself a “conservative socialist,” is the sort of persuadable voter Donald Trump might have been able to win over if he had governed differently. She couldn’t bring herself to vote at all in 2016 — Trump was too disgusting; Hillary Clinton was too entitled — but she wasn’t entirely crestfallen about the result, either. “Give him a chance,” she told her shellshocked grandkids as the election night returns came in. “Sometimes it’s good to shake things up.”

Four years on, she’s given the president a chance. Her verdict: “If Trump were running against a giraffe, I’d vote for the giraffe.”

It’s not that she disagrees with everything Trump has done. “He hasn’t been bad for Israel,” she says, while adding, “He has no sense of loyalty; he could turn on anyone on a dime.” She feels strongly that immigrants should only come to this country legally: “My mother and I waited for years to get our visas; nobody should get to jump the line.” She deeply admired Ruth Bader Ginsburg as a trailblazer and role model but found herself impressed by Amy Coney Barrett’s intelligence and poise after watching last month’s confirmation hearings.

Nor is she exactly wowed by Joe Biden: “Under normal circumstances I probably wouldn’t vote for him. He seems like a perfectly decent man who’s done as well as he has because he doesn’t ruffle feathers.”

But circumstances aren’t normal. “The worst thing Trump has done is the cheapening of our culture,” she says. “He’s figured out that the more outrageous he is, the more his base will be for him.”

The culture that’s been cheapened is the one she encountered in midcentury America. She learned English by reading Archie and Jughead comics, then Nancy Drew mysteries at a New York public library. In high school, Theodore Dreiser (“barely literate, but a great writer”) awakened her to the power of socially engaged literature, as did John Steinbeck. Her movie crushes were Gary Cooper in “High Noon” and Robert Taylor in “Quo Vadis.”

“When I say there was a sweetness in America, it was a sweetness coupled with an innocence,” she says. “It wasn’t that everything was right in the country — far from it — but there was an honesty, maybe gullibility, a belief that America was about defending what’s right.”

In Trump, by contrast, she sees a combination of vulgarity, cynicism and ignorance that represents a fundamental break with the America she first came to love.

“I heard Ivanka Trump compare her father to Winston Churchill,” she says. “Churchill?” She can’t decide what’s worse: That Ivanka would make the comparison to the British leader who helped liberate her from the Nazis — or that a sizable fraction of Americans would actually believe it.

My mom concedes that Trump is at least as much a symptom as he is a cause of what’s gone wrong in the country — “a bad system of education” along with news channels that encourage “herd mentality.”

She also concedes that Biden may not be as upright and incorruptible as he portrays himself. “For the sake of argument, let’s say he’s a crook,” she says. “In that case, isn’t it better to replace your crooks than re-elect them?”

I ask if she thinks America can ever return to its former self after Trump. She has her doubts. “It’s like when you have a fight in a marriage, there are some things you cannot say, because afterward there is no going back.” Trump’s presidency, she thinks, has torn the fabric of American life — some of it based on old habits, some on sustaining illusions — in ways that can neither be repaired nor forgiven. What’s her hope for a Biden presidency? “Some respite,” she answers.

My family’s fondest hope is that next week we will celebrate my mom’s 70 years as an immigrant in America with a respite.