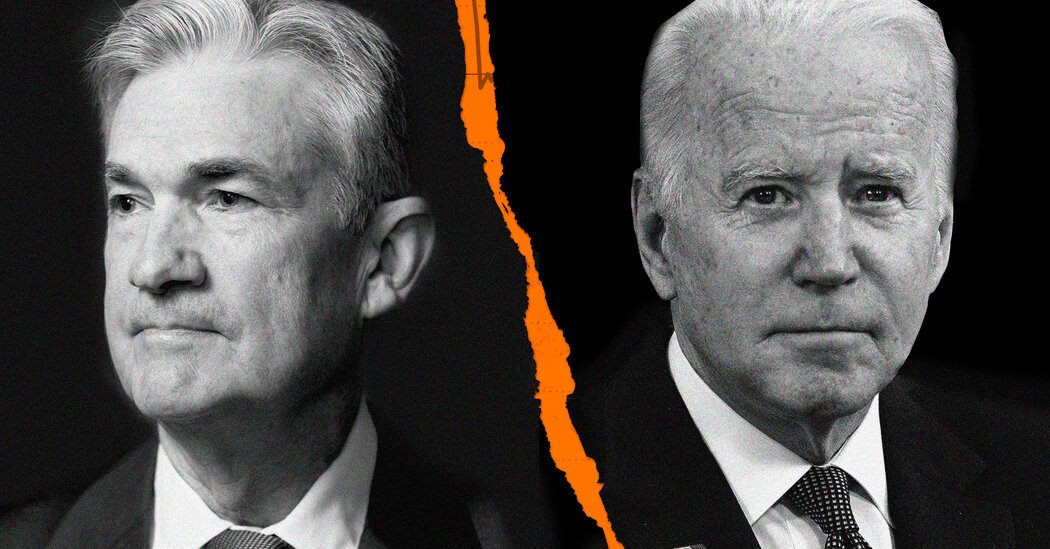 In a much-anticipated meeting on Wednesday, the Federal Reserve announced that it would hasten the end of its pandemic-era economic stimulus and might raise interest rates for the first time since 2018.

The primary reason for the policy pivot, of course, was inflation: Last week, news broke that the Consumer Price Index had risen by 6.8 percent in the year through November, the fastest increase since 1982.

It is not merely an academic concern. Routine expenses like gasoline, food and rent are some of the biggest drivers of today’s inflationary burst, which a majority of voters now say is causing them financial strain. Older Americans on fixed incomes and poorer families without a financial cushion to soften the blow of rising costs are especially affected.

But is the Fed’s response the right one? What are the trade-offs of a tighter money supply, and what alternative ways of reining in inflation should be considered? Here’s what people are saying.

In the summer of 2020, prices began to rise because the pandemic prompted people to shift their spending from services to goods at the same time as it disrupted the way those goods moved around the world. The Fed predicted those disruptions would be temporary — or “transitory.” But instead, the disruption-induced increases have endured and expanded.

“Generally, the higher prices we’re seeing are related to the supply-and-demand imbalances that can be traced directly back to the pandemic and the reopening of the economy,” Jerome Powell, the Fed chair, said during congressional testimony last month. “But it’s also the case that price increases have spread much more broadly in the recent few months.”

In key ways, economists say, the problem has morphed beyond supply disruptions caused directly by the pandemic:

What’s the worst that could happen? The biggest fear is an inflationary spiral: As housing and other day-to-day costs rise, workers may begin to ask for raises to offset them. This in itself is not a bad thing: As The Times’s David Leonhardt pointed out this year, wages today are historically quite low. But if employers are unwilling to take a hit to their profits — which have been rising much faster than wages — they will pass higher labor costs on to consumers. The cycle reinforces itself, causing real incomes to erode.

The case for raising rates

One way the Fed said it plans to tackle inflation is by “tapering” the $120 billion it had been spending every month on government-backed bonds to inject money into the financial markets. In November, the Fed began dialing back that expenditure at a rate of $15 billion per month, but in January the monthly reduction will increase to $30 billion.

The next step — raising interest rates — is more controversial: As The Times’s Jeanna Smialek explains, higher interest rates would make debt of all kinds, from mortgages to car and business loans, more expensive.

Many believe it’s a worthwhile trade-off. “At this juncture, the Fed should likely be more worried about price stability than full employment,” argues Dana Peterson, an executive vice president and chief economist at the Conference Board. “And this latest C.P.I. report on inflation should help to better make this case to financial markets and the American public.”

But just how fast the Fed should raise rates is another question. Some, like the economist Larry Summers, believe the risk of runaway inflation is sufficiently worrisome that the Fed should plan for four hikes in 2022. “That will be a jolt,” he said recently. “But a jolt is what is required to restore credibility.”

But others caution against acting too aggressively. “If you’ve hit the brake hard in a few months, there’s a risk you send this economy into recession, and it would be unnecessary harm to livelihoods,” said Mohamed El-Erian, the chief economic adviser at Allianz. “What they need to do now is ease their foot off the accelerator.”

As Peterson notes, even two or three hikes would leave interest rates well below relatively recent prepandemic levels, leaving room for the economy to continue its recovery.

Could raising rates do more harm than good?

Not everyone is convinced that raising interest rates next year is the right solution. Some warn of a scenario in which the strategy makes workers’ lives worse but fails to significantly slow inflation, like a medication that isn’t very effective at treating an illness but causes bad side effects.

One reason to fear that scenario, the economic historian Adam Tooze explains, is that interest rate increases have the greatest impact on the parts of the economy that are least responsible for inflation — namely, the service sectors.

“The Fed and other central banks may be about to make a hawkish mistake,” he writes in his newsletter, Chartbook. “Inflation right now is not principally in the service sectors. It is in durable goods subject in the main to longer-term forces like globalization. A broad monetary policy squeeze may be a high cost, low return proposition.”

Indeed, the return could even be negative. “In a context where supply-side bottlenecks are major contributors to the price problem, raising rates could actually make things worse,” New York magazine’s Eric Levitz wrote in October. “We need more car production and home construction, not less, if we want to reduce prices in the vehicle and housing markets. Yet if you make it more expensive for carmakers and construction firms to borrow, you are going to reduce supply in those sectors.”

Are there other options?

Raising interest rates is not the only tool at the federal government’s disposal for controlling inflation. To combat the bullwhip effect, for example, The Times’s Peter Coy, citing Shin, writes that the Biden administration could do more to facilitate communication across companies so they can better understand which orders reflect genuine demand and which reflect “phantom” demand.

“We typically don’t think about public authorities going in and directing resources on the real side of the economy,” Shin said. “It’s a fine line. You don’t want to be in there shifting boxes of goods here and there. But to facilitate, that’s entirely legitimate.”

Congress might have a role to play, too. Insofar as reduced labor force participation is contributing to inflation, it’s not a problem that the Fed alone can solve; Congress also needs to find ways to encourage people to get back to work.

In the view of Michael R. Strain, the director of economic policy studies at the American Enterprise Institute, that would entail more narrowly tailoring the White House’s social spending bill that’s currently tied up in the Senate.

“President Joe Biden’s Build Back Better agenda includes a laudable expansion of federal earnings subsidies. By increasing the financial reward for working, these subsidies draw people into employment,” Strain writes. “But the proposal is temporary, an attempt to make room for other programs that will do less good for workers. Congress should refocus Build Back Better on a few urgent problems, including work force participation, rather than take the scattershot approach the bill currently uses.”

But others, such as Rose Khattar of the Center for American Progress, argue that Build Back Better’s broad-based measures are actually quite necessary to reduce inflationary pressures: first by increasing taxation on corporations and the rich; and second by reinvesting the revenues in child care services that will allow parents — mothers, in particular — to re-enter the work force, more generous and more comprehensive Medicare coverage that will lower the cost of prescription drugs, and renewable energy infrastructure that will reduce energy bills.

“For decades, families have been dealing with rising prices alongside stagnant wages,” Khattar writes in The Hill. “The Build Back Better Act will help families with the high costs of these key necessities, which they have struggled with for years — not just the past few months.”

“Reality, not politics is behind the Fed’s hawkish shift in its outlook for inflation” [Stay-At-Home Macro]

Here’s what readers had to say about the last debate: After a school shooting, should parents be prosecuted?

Dennis, from Illinois: “In the recent Michigan school shooting it seems as if there should be a civil liability for the parents and this might be almost as strong a deterrent as criminal. The school and school district are being sued but why not the parents — either by parents of other students, including those killed, or the school district? This falls under the general guideline of parents being financially responsible for the bad behavior of their children.”

Cherian, from Switzerland: “Every sensible person knows that the uncontrolled availability of guns is the main ground of frequent mass shootings in America. Prosecuting parents in the case of minors isn’t the right answer for this. Whatever is done without taking into consideration the root cause of the matter, i.e., the misunderstanding and the misinterpretation of the Constitution with regard to the possession of guns and rifles, will not bring any positive results.”