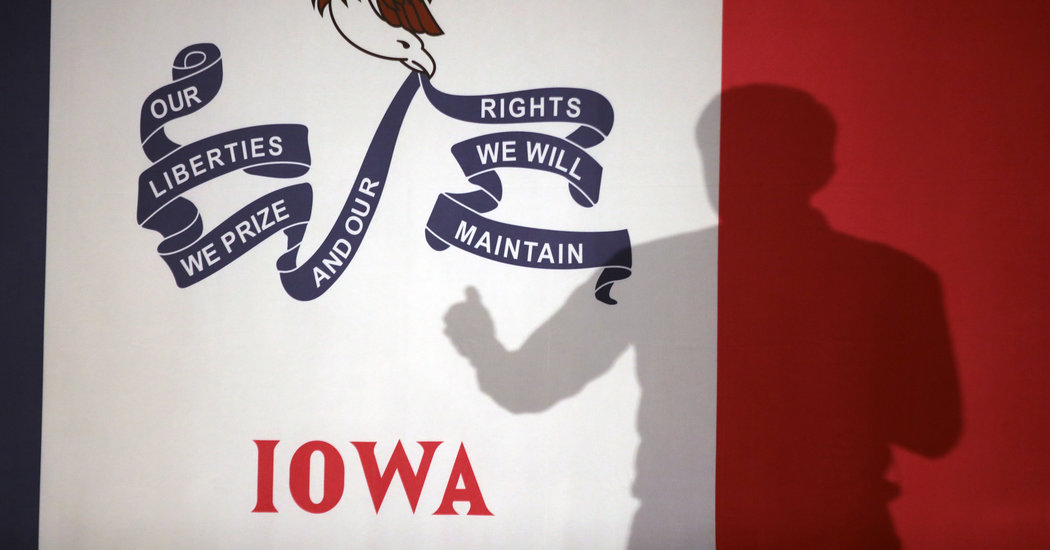 The Iowa caucuses and New Hampshire primary owe their first-in-the-nation status partly to circumstance. Decades ago, Iowa’s caucus was the initial step in a long, complex process that the state used to award delegates, which meant that the voting had to happen early in the year. New Hampshire was mostly trying to save money — by scheduling its primary on the same day as many annual town meetings, which were held before the spring mud season.

“We weren’t stupid,” Cliff Larsen, a former chairman of the Iowa Democratic Party, once said. New Hampshire passed a law saying its primary always must be the first, and Iowa has been similarly protective. “Iowa caucuses are first-in-the-nation mainly because the state insists on remaining first,” Kathie Obradovich, a prominent Iowa journalist, has said.

It’s all worked out very nicely for the two states. A typical voter in Iowa or New Hampshire has up to 20 times more influence than somebody in later-voting states, one study found. Sometimes, the two states have turned a parochial issue (ethanol) into a national priority. Local hotels, restaurants, pollsters and television and radio stations have received millions of dollars in extra business.

This system has worked out much less well for the other 48 states. They have voluntarily surrendered political influence — and allowed the presidential nominating process to become warped.

But step back and think about how paternalistic and condescending that explanation is. The residents of New Jersey, New Mexico, Indiana, Louisiana and other late-voting states somehow aren’t sufficiently civic-minded or intelligent to choose their own presidential candidates? They always need the same two states to winnow the field?

Right now, I’m as obsessed as anyone with the early-state polls. Yet I also want to use this moment to point out how bizarre the current system is — and to make a plea: The 2020 cycle should be the last time that Iowa and New Hampshire benefit at the country’s expense.

The strongest part of the case for change, of course, is the racial aspect of the current calendar. Iowa and New Hampshire are among the country’s whitest states. About 6 percent of their combined population is black or Asian-American. Almost 87 percent is non-Hispanic white, compared with 60 percent for the country as a whole. Demographically, Iowa and New Hampshire look roughly like the America of 1870.

Julián Castro, the former presidential candidate, was right when he called out the Democratic Party’s hypocritical support for the status quo. “Iowa and New Hampshire are wonderful states with wonderful people,” Castro said. But Democrats can’t “complain about Republicans suppressing the votes of people of color, and then begin our nominating contest in two states that hardly have people of color.”

The typical defense from Iowa officials is that their state can be trusted because it once voted for a black man (Barack Obama) — which is a pretty stark bit of paternalism.

In truth, the whiteness of Iowa and New Hampshire matters. Consider that Cory Booker and Kamala Harris were doing as well as Amy Klobuchar in early polls of more diverse states; they led Pete Buttigieg in some polls. But Booker and Harris are finished, in no small part because of their struggles in Iowa and New Hampshire. Klobuchar and Buttigieg still might break out.

Or consider that a candidate with strong white support (like Bernie Sanders) could win both Iowa and New Hampshire this year. That result would create a media narrative about Joe Biden’s campaign being badly wounded, even though Biden leads among two large groups of Democratic voters: African Americans and Latinos. Those voters, however, are told to wait their turn.

Race isn’t the only problem, either. Iowa and New Hampshire are not home to a single city of more than 250,000 people. The two states also have a disproportionately large share of retirees and a smaller share of people in their 20s, 30s and 40s.

All of this skews the campaign. And it’s another form of privilege for groups that already benefit from the Senate and Electoral College — white voters, older voters and voters outside of major metropolitan areas.

It would not be hard to create a fairer system, one that aspired to treat all Americans equally. It could even retain the best aspect of Iowa and New Hampshire: the emphasis on in-person politics that a small state demands.

One or two smaller states could always go first, with the specific states rotating each cycle. (Many smaller states — like Delaware, Hawaii, Mississippi, New Mexico and Rhode Island — are diverse.) They could immediately be followed by a couple of larger states that are home to major cities.

Obviously, politicians in Iowa and New Hampshire will fight any such change, as they always have. They’ll use lofty language, about how solemnly they take their responsibilities and how the current system allows the voices of ordinary citizens to be heard. Strip away the rhetoric, though, and their argument comes down to this: We’re better than the rest of you, and we deserve special treatment forever.

Listen to “The Argument” podcast every Thursday morning, with Ross Douthat, Michelle Goldberg and David Leonhardt.