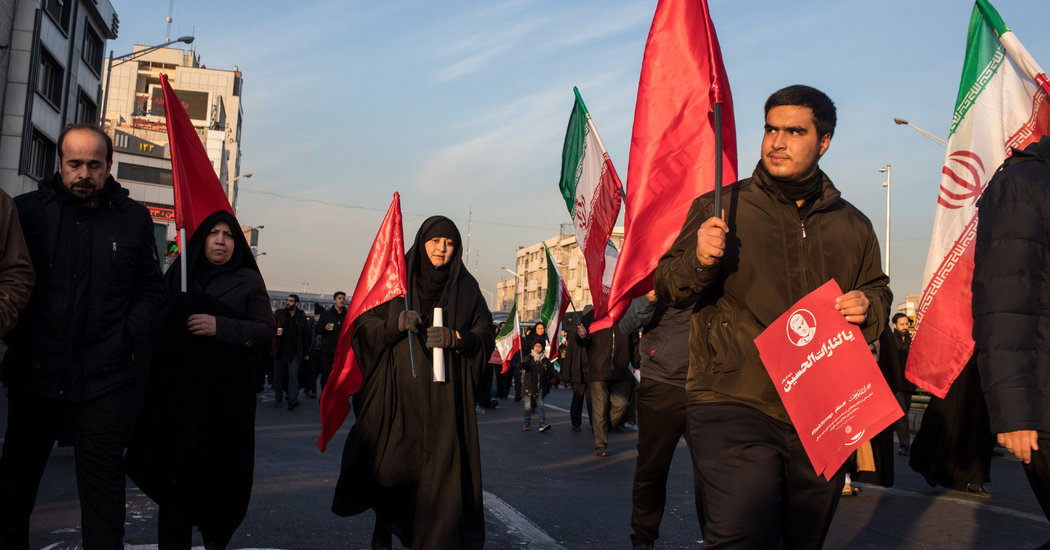 WASHINGTON — Democratic leaders in Congress are moving to swiftly invoke the War Powers Resolution in an attempt to block President Trump from taking the United States into a war with Iran, even as Iran vows revenge for his killing of Maj. Gen. Qassim Suleimani and Mr. Trump is threatening disproportionate strikes inside Iran if it does retaliate.

But Congress’s control over decisions about going to war has been eroding for generations, and administrations of both parties have established precedents that undercut the resolution as a meaningful check on presidential war-making authority.

Here is an explanation of the legal issues raised by the rapidly evolving crisis.

What is the War Powers Resolution?

It is a law Congress enacted in 1973 — overriding President Richard M. Nixon’s veto — in an attempt to regain control over war decisions that had eroded during the Cold War.

Although the Constitution gives Congress the power to declare war, the United States military kept a large standing force deployed around the world as World War II gave way to the Cold War. Presidents, invoking their role as commander in chief, had directed those forces to launch or escalate wars, including in Korea and Vietnam.

One part says presidents may only introduce forces into hostilities after Congress has authorized using force or if the nation has been attacked. No subsequent president has respected that narrow list of when he may unilaterally dispatch forces into combat.

Another part requires presidents to consult with Congress before deploying troops into actual or imminent “hostilities.” Most presidents have obeyed this, but Mr. Trump did not before ordering the Suleimani strike.

Yet another part — important here — says if a president deploys combat troops without authorization, the deployment must end after 60 days unless lawmakers approve it in the interim. It also empowers Congress to direct the president to terminate the operation before that deadline.

What are Democrats trying to do?

They are trying to use the War Powers Resolution to block a war with Iran.

Senator Tim Kaine, Democrat of Virginia, has already proposed a joint resolution to do so, and Speaker Nancy Pelosi said on Sunday that the House would act this week on a similar measure. The House version’s sponsor will be Representative Elissa Slotkin, Democrat of Michigan and a former C.I.A. and Pentagon analyst specializing in Shiite militias.

Mr. Kaine’s resolution declares that Mr. Trump has already introduced American armed forces into hostilities with Iran without congressional authorization and directs him to stop within 30 days of its enactment.

Does the resolution have enough political support?

There are reasons to be doubtful.

Last year, majorities in both chambers tried to use the War Powers Resolution to force Mr. Trump to end American support for Saudi Arabia’s intervention in Yemen’s civil war. But Mr. Trump vetoed it, and an override vote in the Senate failed 53 to 45, with only seven Republicans joining Democrats in challenging the president.

Would it be constitutional?

Mr. Trump might claim a constitutional right to defy such a resolution even if it gets through Congress. Courts have been reluctant to adjudicate disputes between presidents and Congress over their war powers, raising the possibility of a standoff.

Attorney General William P. Barr has long espoused a maximalist interpretation of executive power, and once told President George Bush that he could launch the Persian Gulf war of 1991 without congressional permission and even if lawmakers voted against it. Many executive branch lawyers in Republican administrations have been hostile to the War Powers Resolution.

Many constitutional scholars view the law as a valid constraint on executive power, and Democratic administrations have not raised constitutional objections to it. But there is no controlling precedent to settle the matter, in part because no such confrontation has come to a head.

Perhaps the closest political precedent occurred in 1983. Congress enacted a bill declaring that a peacekeeping mission in Lebanon — after a firefight in Beirut, its capital, killed several Marines — had evolved into “hostilities” covered by the 60-day rule. At the same time, lawmakers granted authority for that mission to continue for 18 months.

President Ronald Reagan signed the law but said in a signing statement that his approval should not be interpreted as a concession that the War Powers Resolution could constrain his authority as commander in chief, though he stopped short of declaring it unconstitutional.

Does the War Powers Resolution apply?

There might be a legal fight over this question, too — especially if any escalated conflict with Iran remained limited to airstrikes and cyberattacks rather than a ground invasion.

Presidents of both parties have argued that the War Powers Resolution did not apply to particular deployments for various reasons. In a 1993 dispute over a peacekeeping mission in Somalia, for example, the Clinton administration argued that the fighting was too intermittent for the law to cover the operation.

And during the 2011 NATO air war in Libya, the Obama administration — despite internal disagreement — argued that American participation could last more than 60 days without congressional authorization because the operation was too limited to count as the sort of “hostilities” the War Powers Resolution covers.

Has Congress already authorized such a war?

The national security adviser, Robert C. O’Brien, has claimed that Mr. Trump’s order to kill General Suleimani was “fully authorized” by the 2002 law in which Congress authorized the use of military force in Iraq, in addition to Mr. Trump’s constitutional authority to carry out acts of self-defense.

The implication appears to be that it is lawful to defend American troops in Iraq because they were deployed under the 2002 law — even if the threat comes from an Iranian. If Iran responds by attacking American forces in Iraq, the Trump legal team might similarly say the 2002 law covers an escalating response.

Mr. Kaine’s resolution, which states that the Suleimani killing had no congressional authorization, rejects the idea that the 2002 law covers the growing conflict with Iran.

Was killing Suleimani an “assassination”?

It is unclear. It depends both on the definition of “assassination” and on the strength of the secret intelligence that the Trump administration has said backs its claim that General Suleimani was plotting an “imminent” attack on American forces in Iraq.

As a legal matter, Executive Order 12333 bans government officials from engaging or conspiring in assassinations, but neither it nor any federal law defines the term.

The executive order traces back to a rule imposed by President Gerald R. Ford after accusations came to light in the 1970s that the C.I.A. had been involved in plots to kill foreign elected leaders with Communist sympathies. Later, as the United States grappled with Islamist terrorism, executive branch lawyers under both parties wrote secret memos developing the idea that targeted killings in self-defense are not assassinations.

The Obama administration also developed the idea that what counts as an “imminent” threat — which permits violent acts undertaken in self-defense — can be stretched for terrorists who are continuously planning attacks from the shadows, so that they can be struck during any fleeting opportunity even if they pose no literally imminent threat at that moment.

But no American court precedent exists adjudicating whether either theory is legitimate.

General Suleimani was a high-ranking official of a national government, not a leader of a nonstate terrorist group. But further complicating matters, last year Mr. Trump designated the branch of the Iranian military that General Suleimani led a foreign terrorist organization, the first time the United States deemed a state entity to meet that criteria.

Mr. Trump has said on Twitter that if Iran strikes any Americans or American assets in retaliation for General Suleimani’s killing, he will order the military to attack sites that include some that are “important to Iran & the Iranian culture” and that the American strikes back will be “perhaps in a disproportionate manner.”

Part of the Hague Convention requires sparing, as far as possible, “buildings dedicated to religion, art, science” and “historical monuments” so long as they are not being used for a military purpose. The War Crimes Act makes it a felony under domestic law for an American to violate this ban, punishable by up to life in prison or execution if someone is also killed.

The law of war also requires distinguishing military targets from civilian people and property, which cannot be intentionally targeted. While some collateral damage is permissible as a side consequence of striking a legitimate target, it must be proportionate to the military objective.