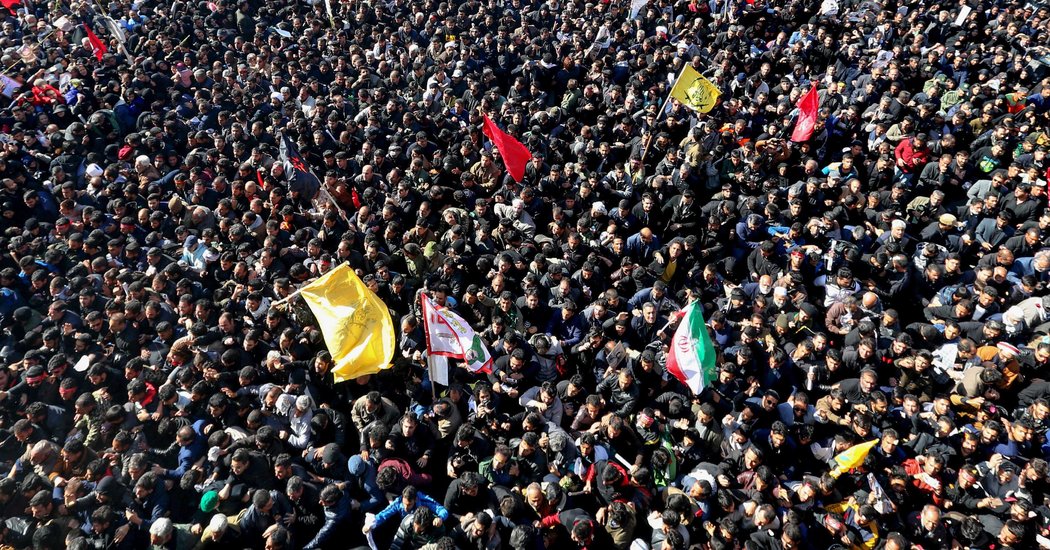 BAGHDAD — Iran attacked two bases in Iraq that house American troops with a barrage of missiles early Wednesday, Iranian official news media and United States officials said, the start of what Tehran had promised would be retaliation for the killing of a top Iranian commander.

American officials in Washington said that Iran had fired more than a dozen ballistic missiles at two military bases in Iraq where American troops are stationed. The Pentagon said it was assessing whether any American troops had been killed or injured in the strikes. United States officials said there were no immediate indications of American casualties.

After the strikes, President Trump, who has vowed a strong response to any Iranian attack on American targets, met at the White House with his top national security advisers, including Defense Secretary Mark T. Esper and Gen. Mark A. Milley, the chairman of the Joint Chiefs of Staff, to discuss possible retaliatory options.

On Twitter a few hours later, Mr. Trump struck an upbeat tone and promised to make a statement on Wednesday morning. Some aides said they believed that Mr. Trump wanted to find a way to de-escalate the crisis.

“All is well!” he wrote. “Missiles launched from Iran at two military bases located in Iraq. Assessment of casualties & damages taking place now. So far, so good! We have the most powerful and well equipped military anywhere in the world, by far!”

Mohammad Javad Zarif, Iran’s foreign minister, also seemed ready to stand down, for now. “Iran took & concluded proportionate measures in self-defense,” Mr. Zarif tweeted. “We do not seek escalation or war, but will defend ourselves against any aggression.”

The American killing of Maj. Gen. Qassim Suleimani, a hero at home but a terrorist to the United States government, has scaled into one of the most dangerous confrontations between the two countries in the four decades of animosity that have followed the Islamic Revolution.

Iran’s firing of ballistic missiles from inside its borders — not relying on rockets from Iranian-backed proxies — at two of the main military bases where many of the more than 5,000 American troops in Iraq are stationed was a significant escalation of force that threatened to ignite a widening conflict throughout the Middle East.

It was also a stark message from Tehran that it has the will and the ability to strike at American targets in neighboring Iraq.

“It is clear that these missiles were launched from Iran and targeted at least two Iraqi military bases hosting U.S. military and coalition personnel at Al Asad and Erbil,” Jonathan Hoffman, the Pentagon’s chief spokesman, said in a statement.

Iranian news media reported the attacks hours after the remains of General Suleimani were returned to his hometown in Iran for burial amid a huge outpouring of grief and rage at the United States. The funeral procession was so huge and unwieldy that more than 50 people died in a stampede, state news media reported, forcing a delay in the burial.

Iranian officials said the attacks began at 1:20 a.m. — the time General Suleimani was killed Friday by an American drone at the Baghdad International Airport.

Some Iranian officials posted images of their country’s flag on Twitter, in a pointed rejoinder to Mr. Trump, who tweeted an American flag after General Suleimani was killed.

Iran’s military planners had anticipated retaliatory strikes by the United States. Key military, oil and energy sites were placed on high alert, and underground missile defense systems were prepared to counterattack, said a person familiar with the planning.

Iranian officials awaited Mr. Trump to address to the nation on Tuesday night, and when he did not do so, they suspected the United States might wait to respond or not respond at all, the person said.

Reports from American intelligence agencies of an imminent attack from Iran had intensified throughout the day, and senior officials had said they were bracing for some kind of attack against American bases in Iraq or elsewhere in the Middle East.

Over the past two days, American military and intelligence officials had closely monitored the movements of Iran’s ballistic force units — the crown jewel of the country’s arsenal. It was initially unclear whether the movements were a defensive dispersal or the preparations for a retaliatory attack. But by midday Tuesday, top American officials said it had become clear that some kind of Iranian attack was coming.

As tensions mounted, the president’s top national security advisers began gathering in the White House Situation Room about 2 p.m. — about three and a half hours before the attacks. Mr. Trump joined them after a previously scheduled meeting with the Greek prime minister, Kyriakos Mitsotakis.

Unlike after the American drone strike last week that killed General Suleimani, Democratic congressional leaders were notified immediately after the Iranian strikes.

Speaker Nancy Pelosi was meeting on Tuesday evening with senior Democrats about Mr. Trump’s impeachment trial when she was handed a note telling her of the Iranian attack on American forces in Iraq.

“We must ensure the safety of our servicemembers, including ending needless provocations from the administration and demanding that Iran cease its violence,” Ms. Pelosi tweeted. “America & world cannot afford war.”

Reactions to the strikes diverged sharply on Capitol Hill, with Democrats condemning the series of events that led to the escalation, and Republicans pressing Mr. Trump to project military strength.

Senator Richard J. Durbin of Illinois, the chamber’s No. 2 Democrat, used Twitter to urge lawmakers to reassert Congress’s constitutional authority over matters of war and peace.

“The escalation of violence between Iran and the United States makes the constitutional responsibility of Congress to decide whether to declare war more important than ever,” Mr. Durbin tweeted.

Representative Michael Waltz, Republican of Florida, a former Army Green Beret who served in Afghanistan and worked in the Pentagon under President George W. Bush, said in a brief interview on Tuesday evening that he would reserve judgment about the strikes until more information became available. But, Mr. Waltz said, “the president’s been very clear, as you should be in a deterrence posture: They will impose consequences and they’ll be directly on the Iranian regime.”

One of the bases that was struck on Tuesday, Al Asad Air Base, has long been a hub for American military operations in western Iraq; Danish troops have also been stationed there in recent years.

In 2017, as the American-led coalition built up the base for its campaign against the Islamic State, roughly 500 American military and civilian personnel were located there. Units stationed there consisted of a shock trauma medical unit, a targeting cell, a Navy SEAL Special Operations task force and a company of Marines that served mostly as protection for the American side of the base. The airfield serviced drones and reconnaissance aircraft.

After the physical defeat of the Islamic State’s so-called caliphate in 2019, some troops have left the base, but it still maintains a robust presence.

The other base that was struck, in Erbil in northern Iraq, has been a Special Operations hub to hundreds of American and other allied troops, logistics personnel and intelligence specialists throughout the fight against the Islamic State. The base shares its borders with the city’s airport, which transport aircraft, gunships and reconnaissance planes have used as an anchor point for operations in both northern Iraq and deep into eastern Syria.

The Iranian missile attack came on a day that began with thousands of Iranians taking to the streets for General Suleimani’s funeral procession, a public mourning marred by a deadly stampede.

The head of Iran’s emergency medical services said 56 people had died and 213 were injured, the broadcaster IRIB reported on its website, as millions of people flooded the streets of Kerman to witness the procession.

Witnesses said on social media and on the BBC’s Persian service that the street leading to the funeral was too narrow to handle the crowd, and that some side streets had been closed off for security reasons, leaving those who were caught in the crush with no place to escape.

The overcrowding and the subsequent stampede in Kerman led the authorities to delay General Suleimani’s burial, the state news media reported. But he was buried around midnight, as Iran prepared to launch missile attacks against American forces in retaliation for his death, said Hossein Soleimani, the editor in chief of the main Revolutionary Guards news website.

The general’s body had been flown to Kerman after a funeral service on Monday in Tehran, the capital, where there were even bigger crowds. He had requested a burial in his hometown.