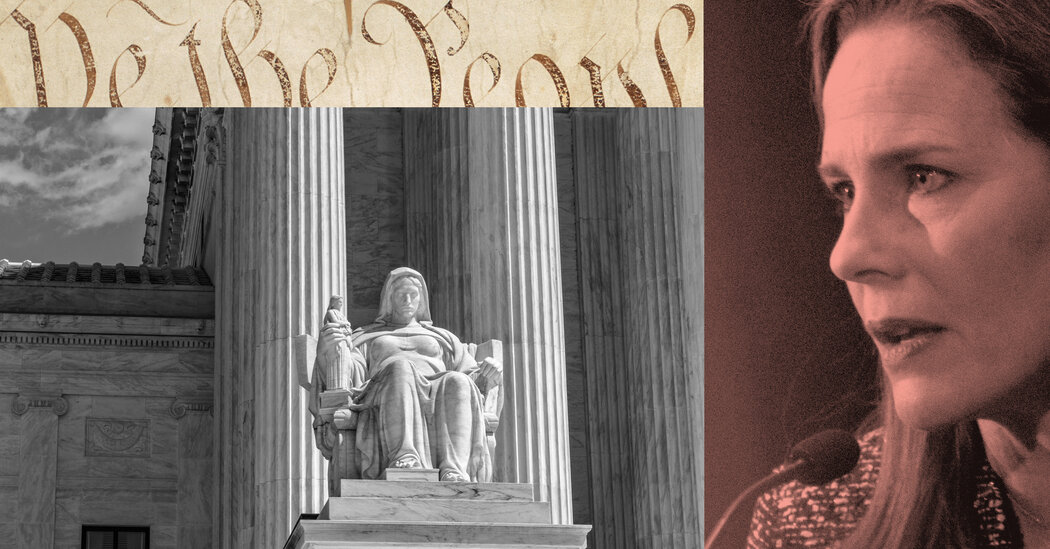 Much of the public anxiety about Amy Coney Barrett — judge on the U.S. Court of Appeals for the Seventh Circuit, Notre Dame law professor and Donald Trump’s nominee for the Supreme Court — has focused on the question of abortion, and whether as a believer in originalism and a practicing Catholic she would be likely to vote to reverse Roe v. Wade.

At least as consequential might be her position on the Social Security Administration: She has suggested that an originalist — whose view of the law is rooted in the idea that the duty of judges is to ascertain whether laws reflect the original meaning of the Constitution — might say that it is not clearly permissible given a strict reading of the Constitution. This isn’t to say that she thinks it should or even could be repealed. “Some decisions,” she wrote, “thought inconsistent with the Constitution’s original public meaning are so well baked into government that reversing them would wreak havoc.” But it does indicate that in the area of judicial philosophy, there are many ways to be extreme.

The Supreme Court has at least as significant an influence on questions about national economic life as it does on social issues. Although we don’t usually think of it this way, the decisions of the Supreme Court have the power to affect the quality of the air we breathe, the pay we receive and the conditions under which we work, by determining what kinds of business and industry regulations are constitutional.

Those who share Judge Barrett’s belief in the legal philosophy of originalism are not ideologically monolithic, but most originalist judges are united in a deep skepticism toward the idea of a powerful federal government. Can it determine regulations that shape national economic policy? What kinds of laws can and should be permitted under the rubric of regulating interstate commerce?

With a 6-3 conservative court, the country is at risk of having the few remaining tools that permit some limits on the power of business — like labor unions and environmental legislation — weakened still further. The court’s future decisions could give corporations even more weight and workers less, by blocking potential legislation that might mitigate the impact of unfettered capitalism and staggering inequality.

As a federal appeals judge, Judge Barrett has often ruled in ways friendly to employers. She has joined rulings that stopped a case in which the U.S. Equal Employment Opportunity Commission objected to a company that allegedly assigned workers to particular geographic locations based on race and ethnicity and that limit the scope of laws prohibiting age discrimination.

During the 1930s, similar issues brought Franklin D. Roosevelt’s administration into conflict with the Supreme Court. Many of the early initiatives of the New Deal were rejected as unconstitutional — something the court had done since the early 20th century, acting as a bulwark against Gilded Age social and economic reforms. State laws that tried to set maximum working hours, for example, were rejected by the court as an intolerable restriction on freedom of contract.

After his re-election in 1936, with the Social Security Act and the National Labor Relations Act facing constitutional review and the country mired in economic depression, Roosevelt did not want to see his entire program jeopardized by the court. Instead, in February 1937 he proposed a mandatory retirement age of 70 — the “court-packing” plan, as it became known — with any judge who refused to step down to be supplemented by an additional justice with full voting rights. This would have meant as many as six new judges. The bill met with fierce hostility from conservatives who viewed it as evidence of Roosevelt’s tyrannous leanings. It ultimately failed, but the court stopped striking down New Deal legislation.

In the following decades, the court became publicly associated with liberalism and civil rights. But just as the conservatives of an earlier generation recognized that the courts could be used to override majorities that pushed for limitations of property rights, in the summer of 1971, the lawyer Lewis Powell wrote a memorandum for the United States Chamber of Commerce, “Attack on the American Free Enterprise System.”

Powell suggested that the Chamber should do more to intervene in politics — and most notable was his attitude toward the courts. “Under our constitutional system, especially with an activist-minded Supreme Court, the judiciary may be the most important instrument for social, economic and political change,” he wrote.

Soon after, Richard Nixon nominated Powell for the Supreme Court; he was a justice for 15 years, and his rulings helped to expand the First Amendment rights enjoyed by corporations, paving the way for Citizens United.

The current court’s docket contains cases that deal with the power of business and the ability of the state to regulate it — including the constitutionality of the Affordable Care Act and the question of whether American corporations can be sued for allegedly abetting human-rights abuses in countries where they do business abroad.

But these cases in themselves are less significant than the underlying question: Will the Supreme Court become once more what it was in the early 20th century? Will it insist on a circumscribed national government and a rigid vision of individual economic rights — in the midst of a second Gilded Age? It is unlikely that the Supreme Court would hear a challenge to basic questions about the constitutionality of the Environmental Protection Agency or the National Labor Relations Act — but the idea that the court might be more sympathetic to a narrow reading of the Constitution could encourage potential litigants to attempt just such cases.

The conservatism of the court could pose a new barrier to future, more sweeping efforts at social reform — for example, a broader national health system.

And it could mean that — as has so often been the case in recent years — workers, ordinary citizens and the very possibility of democratic governance will again lose out.

Kim Phillips-Fein, a historian at the Gallatin School of Individualized Study at New York University, is the author, most recently, of “Fear City: New York’s Fiscal Crisis and the Rise of Austerity Politics” and “Invisible Hands: The Businessmen’s Crusade Against the New Deal.”