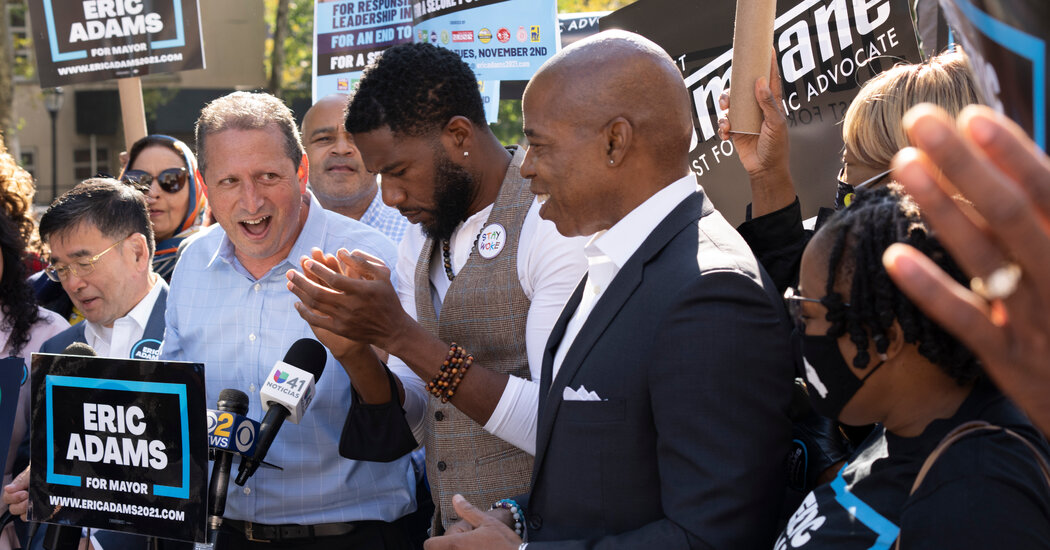 Brooklyn’s influence over New York City politics grew with Eric Adams’s mayoral win, and it could grow further if a candidate from the borough is elected governor.

When she took the stage at a recent reception for the Brooklyn Democratic Party, Gov. Kathy Hochul could not ignore the evidence gathered before her.

“Anyone on the stage not from Brooklyn?” Ms. Hochul joked at the event, held at the Somos conference in Puerto Rico. “Can we spread the love around a little bit?”

As Brooklyn politicians, including Chuck Schumer, the Senate majority leader, and Eric Adams, New York City’s mayor-elect, looked on, the response from the crowd was a resounding “no.”

Brooklyn, the city’s most populous borough, is unquestionably enjoying a moment.

With Mr. Adams’s victory, the city will now have its second consecutive mayor from Brooklyn. Brad Lander, the next comptroller, and Jumaane D. Williams, who was re-elected as public advocate, also hail from Brooklyn — giving the borough ownership of all three citywide elected officials next year.

Representative Hakeem Jeffries, the state’s highest ranking House Democrat, represents Brooklyn and is often mentioned as a future candidate for speaker (he is also fond of quoting the Brooklyn rapper the Notorious B.I.G. on the House floor).

“Brooklyn has never had this much clout,” Mr. Lander said jokingly.

For many years, Manhattan has been the traditional power center of New York, with local leaders from other boroughs grousing that Manhattan received preferential treatment on everything from snow removal to economic development projects.

“There was no question that over the years that Manhattan was the center of the universe,” said Marty Markowitz, the former Brooklyn borough president.

That has changed in recent years as more young people of the professional and creative class moved to Brooklyn, gentrifying certain neighborhoods there. People who were priced out of parts of Brooklyn moved to Manhattan. If Brooklyn were a stand-alone city, it would be the fourth largest in the country.

“A win for Brooklyn is a win for everyone who has been left behind or feels invisible in the halls of power,” said Justin Brannan, a councilman who represents Bay Ridge in Brooklyn and is a leading candidate for City Council speaker. “But we’re done fighting over crumbs just because we may live far from City Hall. Now we’re inside the building, doing the thing.”

Brooklyn also began leading the city out of the pandemic. Private sector jobs increased faster there than in Manhattan, which was devastated by the loss of tourism, hotel closures and empty office buildings as international travel was restricted and companies moved to remote work at the height of the pandemic.

“We are hitting our stride politically but also economically,” said Randy Peers, president and chief executive of the Brooklyn Chamber of Commerce. “We’ve got the right leadership at the right time.”

Mr. Adams, the outgoing Brooklyn borough president, owns a home in Bedford-Stuyvesant that he famously opened to reporters during the Democratic primary to prove that he lived there. Mr. de Blasio, who owns two homes in Park Slope, was so steadfast in his loyalty to Brooklyn that he endured years of criticism for being driven to his old neighborhood from Gracie Mansion to work out at the local Y.M.C.A.

Even though Mr. Adams plans to move into Gracie Mansion on the Upper East Side, he said he will also spend time at his home in Bedford-Stuyvesant.

“I love Brooklyn,” Mr. Adams told WPIX-TV the day after easily beating the Republican nominee, Curtis Sliwa. “I’m going to be an outer-borough mayor, not just a Manhattan-centered mayor.”

Bruce Gyory, a Democratic strategist, said Mr. Adams’s attitude is important. Previous Manhattan-centric mayors like Michael R. Bloomberg ran into problems when other boroughs felt left out of the city’s growth. Mr. de Blasio leaned on the idea of New York being a “tale of two cities” to win election in 2013 after Mr. Bloomberg had served three terms.

Brooklyn’s size and diversity has allowed politicians there to use the borough as a solid base for launching citywide and statewide campaigns, Mr. Gyory added.

Black, Caribbean and Latino voters there have long represented a solid base and Asian communities are gaining more political power. The borough has the most registered Democrats of any county in the state and the share of Democratic votes cast there increased in the Democratic primary.

“Some people say Brooklyn is like what Iowa is to presidential elections,” said Assemblywoman Rodneyse Bichotte Hermelyn, chairwoman of the Brooklyn Democratic Party. “You have to come here first to get a stamp of approval to even be considered a contender.”

Since she replaced Andrew M. Cuomo as governor and announced that she was running for a full term, Ms. Hochul has come to the borough to attend a Brooklyn Democratic Party fund-raiser at Junior’s; rally against Texas’ new abortion law at Brooklyn Borough Hall; sign a bill expanding food benefits in Brownsville and promote Covid-19 vaccinations at the Barclays Center.

But Brooklyn’s ascendancy has also brought some growing pains. Tensions have risen at the meetings of the Democratic Party in Brooklyn, where a crop of mostly younger, more progressive district leaders often clash with leadership, demanding more transparency into how the party machine operates.

In one recent flare-up, Assemblywoman Maritza Davila accused Ms. Bichotte Hermelyn’s husband of attacking her by singing “the most derogatory, disgusting and degrading verse of a Spanish song that I can’t even repeat.” Ms. Davila also said that Ms. Bichotte Hermelyn called her “stupid.”

Ms. Bichotte Hermelyn denied both charges in an interview. “The silly attacks are a reflection of our success,” she said.

“It’s a divided, fractured party where some members have decided to speak up and no longer follow the party leadership, which is trying to limit the participation of Brooklyn county committee members and voters,” he said.

In spite of the internal squabbles, Donovan Richards, the Queens borough president, said he spent a lot of time at Somos joking with elected officials from Brooklyn about their dominance in city politics.

“Can they leave a little meat on the bone for anyplace outside of their republic?” Mr. Richards said. “If I had to quote DMX, ‘Stop being greedy and give to the needy.’ There are five boroughs.”

Mr. Richards said there was no animosity. He endorsed Mr. Adams for mayor and said he was glad to see “outer-borough power shifts” happening in real time. Mr. Adams often mentions his roots in southeast Queens, where he grew up and there are still political contests to be won, Mr. Donovan said. Queens will certainly play a role in helping to select the next speaker of the City Council.

“No matter where you go it’s always: ‘Is Brooklyn in the house?’ Us Queens folks are used to that,” Mr. Richards said. “It’s their time and we don’t look at it as a negative thing. Every borough has its moment.”