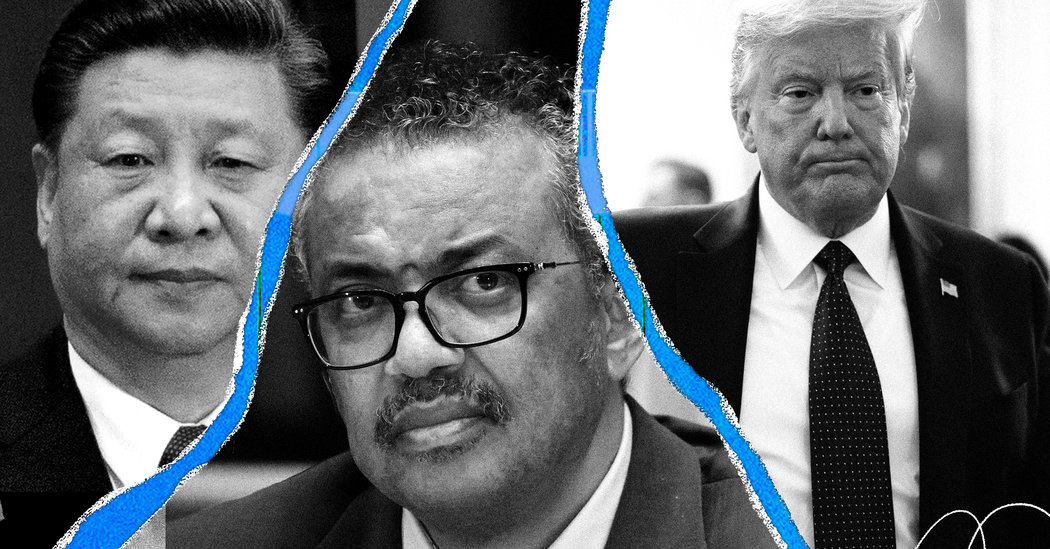 On Tuesday, President Trump formally began the process of pulling the United States out of the World Health Organization, having accused the organization of not holding the Chinese government to account for its handling of the coronavirus.

The withdrawal would not go into effect until next July. But the prospect of losing the United States as a member, far and away the W.H.O.’s largest donor, is a big blow to the organization, and comes just a day after 239 scientists in 39 countries wrote an open letter claiming its guidance on airborne transmission was outdated.

Mr. Trump’s criticisms of the W.H.O. may be hypocritical, but many public-health experts and journalists say they are not entirely unfounded. What has the pandemic revealed about the organization’s shortcomings, and how can they be remedied? Here’s what people are saying.

What exactly is the W.H.O.?

The World Health Organization was founded as part of the United Nations in the wake of World War II, at the dawn of what some call Pax Americana, or the American Century. A product of that era’s heady faith in international cooperation, the W.H.O. stated as its founding objective “the attainment by all peoples of the highest possible level of health.” In practice, this broad mandate has translated to alerting the world to potential public-health threats, preventing the spread of diseases, and championing universal health care policy.

During emergencies like the coronavirus, the W.H.O. is meant to act as a coordinating body, employing its 7,000 workers spread over 150 offices worldwide to organize a global response, guide containment, declare emergencies and make recommendations in cooperation with member nations. If a vaccine is ever discovered for the coronavirus, the W.H.O. will play an important role in coordinating its distribution and influencing its pricing.

But the W.H.O. was never vested with any direct authority over its members, as my colleagues Daniel Victor and Christine Hauser explain, so its mission often exceeds its abilities. And like any governing body, the organization is subject to budgetary and political pressures, especially from powerful nations like the United States and China, as well as from private funders like the Gates Foundation.

The W.H.O.’s track record of responding to emergencies is uneven, The Times editorial board writes. While it boasts many momentous achievements — including the eradication of smallpox, the near eradication of polio, the development of an Ebola vaccine and a huge expansion of basic health care services in low-income countries — it also suffers from institutional sclerosis. The W.H.O.’s sluggish response to the West African Ebola outbreak in 2014 was primarily responsible for the severity of that epidemic, which killed 11,000 people in two years. According to ProPublica, the Obama administration was so displeased with the W.H.O. that it largely bypassed the agency to coordinate its Ebola response with other countries.

The W.H.O.’s communication about the evolving science of the virus had been drawing scrutiny well before this week.

The W.H.O. has been mired in political controversy, too, in large part because of its perceived deference to the Chinese government.

The timeline of the W.H.O.’s response matters because of the exponential nature of the coronavirus’s spread. In New York City, for example, researchers have estimated that acting even a week or two earlier might have reduced cases by 50 percent to 80 percent. To prevent a similar calamity from occurring again, the Wall Street Journal editorial board argues, the W.H.O. must either be reformed to gain more independence from China or be defunded.

Despite its flaws, the W.H.O. has been proved a force largely for good over its 72-year life, the Times editorial board argues. But with an annual budget of only $4.8 billion, the organization clearly does not have the resources to adequately serve its mission. “It’s not a failed bureaucracy,” William Foege, a former director of the Centers for Disease Control and Prevention who worked on the international campaign to eradicate smallpox, told ProPublica. “If you go there and see all they do every year, and they have a budget for the entire world that’s smaller than many medical centers in this country.”

The answer to this problem, the board says, it to give the W.H.O. more power and funding, not less: “The United States and other member nations — like Brazil, which also recently threatened to leave the organization — should try seeing the W.H.O. for what it is: a reflection of the countries that created it and that wrote its bylaws. If they don’t like what they see, they should work to improve that reflection.”

More funding could also help the W.H.O. become less dependent on China, Yu-Jie Chen and Jerome A. Cohen write in The Japan Times. Beijing’s influence is not primarily financial. Rather, it stems from Beijing’s talent for building coalitions within the organization, which affords it significant sway over the body’s decisions, including the selection of its leader. So in withdrawing funding, they argue, the United States would be forfeiting its primary point of leverage.

Experts also told The Times that while the W.H.O. has made some missteps during the pandemic, it has done well overall given its organizational constraints. Dr. Ashish Jha, director of the Harvard Global Health Institute, said that the withdrawal “will both harm global public health and harm the health of the American people.”

Fixing the W.H.O. begins with funding, but it won’t end there, writes Zeynep Tufekci in The Atlantic. “We must save the W.H.O., but not by reflexively pretending that nothing’s wrong with it, just because President Trump is going after the organization,” she argues. “It needs to be restructured, and the first order of business is to make sure that it’s led by health professionals who are given the latitude to be independent and the means to resist bullying and pressure, and who demonstrate spine and an unfailing commitment to the Hippocratic oath when they count most.”

The W.H.O. may even need to be transformed rather than fixed, according to Kelley Lee, a researcher at Simon Fraser University in British Columbia who published a book about the organization. As she explained in Vox, the W.H.O. and the United Nations were conceived during a period when nation-states — and particularly the United States — were the primary agents of global power. While states won’t be going away anytime soon, the rise of the internet and multinational tech giants like Facebook mean they aren’t the only important actors on the world stage anymore.

As an analogy, she suggested, think of an old computer: You can upgrade it over the years, but at a certain point, you’ll need to buy a new one. Instead of trying to retrofit your Macintosh II to stream Netflix, you might be better off getting an iPad.

[Related: Can We Reimagine Global Health in the Post-Pandemic World?]

But what would “this new, iPad version of the W.H.O.” look like? Dr. Lee thinks it should probably take the form of a supranational authority that requires countries to cede power at the state level in exchange for global security. An example of such an institution is the World Trade Organization, which was created in the 1990s and has the power to enforce sanctions.

But even the World Trade Organization has been hobbled by the Trump administration’s refusal to appoint judges, and right now many countries are seeking to wrest power from international institutions, not cede it. “Some countries may decide that, no, we’re going to retreat into our castles,” Dr. Lee said. “And obviously that didn’t work when the Black Plague came along.”

Listen: “What happens if the United States pulls out of the W.H.O. during the pandemic?” [The Atlantic]

“He Warned of Coronavirus. Here’s What He Told Us Before He Died.” [The New York Times]

“The W.H.O. Ignores Taiwan. The World Pays the Price.” [The Nation]

Here’s what readers had to say about the last edition: Are Unemployed Americans About to Fall Off a Cliff?

Shelly from Washington: “I am a single mother in Seattle with a son who has not gone to school since March and there are zero day cares or camps available. I cannot work and have to be home with him. … We never received a stimulus check so the only thing keeping us on track is the additional $600 a week unemployment benefit. What I collect in a week from unemployment is just under what I made before so this has been so important. If this ends, we will lose everything. I don’t know what to do. Not knowing what is going to happen at the end of the month is enough to make me go mad. It is truly terrifying and the anxiety is almost unbearable.”

Christopher from Indiana: “Without the $600, I will not be able to afford health insurance. It is critical that you emphasize that point in your relief bill debate coverage.

“My company, Jadcore Inc. of Terre Haute, Ind., a plastics recycler, stayed open during Indiana’s lockdown, as ‘a supplier to essential businesses.’ I worked for them for 14 years, was arguably their top operator with the highest production out of 24 operators, and my pay rate started at $8 per hour in 2005, and was at $17 per hour in April of this year, a pretty good wage for factory work in Indiana.

“My situation was a nightmare, and my case remained open and unpaid for eight weeks, due to ‘voluntary quit.’ My savings were exhausted during this time and I was about to go under financially, and my employer-supplied health insurance was gone. I could not, and cannot, afford $953-a-month COBRA coverage.”