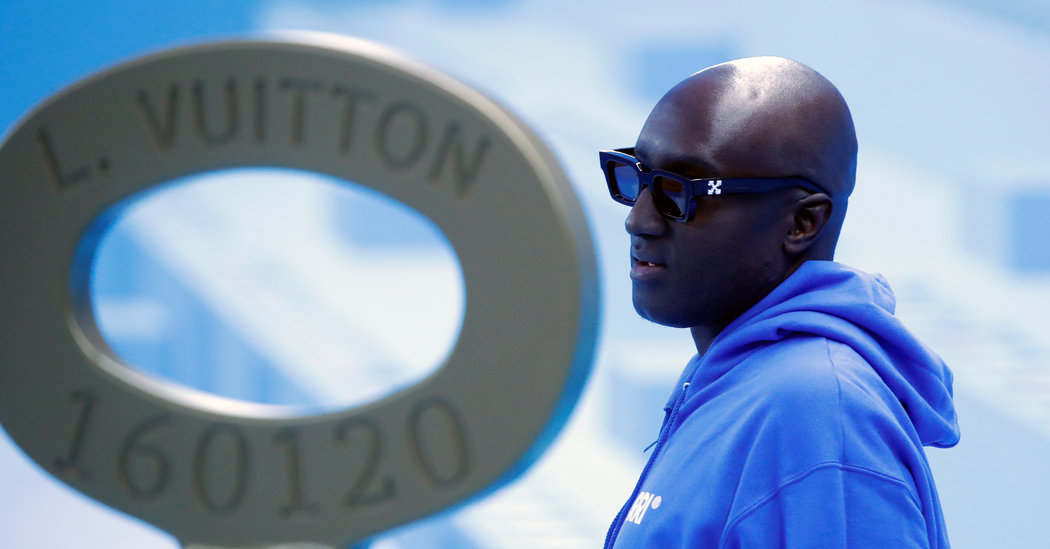 Virgil Abloh, the founder of Off-White and the men’s wear designer of Louis Vuitton, is the kind of fashion figure that seems to demand comparison.

Almost every profile contains one buried somewhere in the text (or not so buried). He is “the Andy Warhol for our times” (The Guardian), he is “Jeff Koons” (the editor Stefano Tonchi). He is most often — and when no individual will do — “a Renaissance man.” While struggling to explain his ubiquity, his seeming sudden blanketing of the culture, people grasp for someone, anyone, to make sense of his influence.

After all, aside from his two fashion day jobs, here is a partial list of the companies and brands with which he has collaborated: Evian, Nike, Vitra, Ikea, Champion, Equinox, Jimmy Choo, Sunglass Hut and McDonald’s. Here is a list of galleries and museums where his work has been shown (and sold): the Museum of Contemporary Art Chicago, Galerie Kreo in Paris, Gagosian, the Louvre.

Here is where he D.J.’s: CircoLoco in Ibiza, Jimmy’z in Monte Carlo, Coachella, the Sub Club in Glasgow and the Potato Head Beach Club in Bali.

But of all the comparisons that have been posited since Mr. Abloh landed in Paris Fashion Week six years ago and began his viral takeover, perhaps the one that gets the strongest reaction is a more fashion-centric idea: Mr. Abloh is the Karl Lagerfeld of the millennial generation.

But to pretty much everyone else in fashion, it’s a blasphemous statement. Almost every time I suggested it to someone while chatting catwalk-side during the most recent show season, which since early February has been moving from New York to London to Milan and now Paris, they blanched and said, “Oh, please, no!” or “That’s crazy!” or “Is this a joke?”

(Then they said, “Don’t quote me,” and made anodyne statements about Mr. Abloh’s resonance with young people.)

Perhaps it is too early: for both men. Mr. Lagerfeld died only a year ago this fashion month at 85-ish, after more than five decades in fashion, and the industry is still mourning his loss. Mr. Abloh, 39, has been showing a brand for only six years. He’s still relatively unproven. But then, attention spans are increasingly short.

Mr. Lagerfeld, the designer of Chanel, Fendi and his own line, among many other things, is often viewed as the ultimate fashion figure: a one-off creative genius whose imagination and intellect could not be contained in a single brand, and whose understanding of the art of the atelier was unparalleled. He was, above all, a professional designer.

Mr. Abloh is the man who told the world (at Columbia), “You don’t have to be a designer to be a designer.” He doesn’t even call himself a designer; he calls himself a “maker,” according to The New Yorker — perhaps in acknowledgment of critics, myself included, who don’t think he is particularly great at his day job (or that he even cares).

He embraces, and propagates, the idea that fashion is not about clothes, but rather totems of community, and that the uniforms of various youth subcultures have a legitimate place in the temple of the elite.

There’s a suspicion, somehow, that he is scamming the industry; seeing how far he can exploit its own embarrassing desire for cool, its need for visible diversity, and its lust for his millions of Instagram followers.

High fashion, after all, is famously white, set in its often-old-fashioned ways, and yet desperate to appeal to a generation of consumers whom, it suspects, have a very different idea of what matters than the current establishment does. Mr. Abloh exploits, tantalizingly, the promise of all that. People line up for what he is selling, even if they feel like what he is selling is a line. (Maybe because he is selling a line.)

This is a moment of reckoning with the world we have wrought, in politics, in technology, in society. And in many ways, the idea that it may be Mr. Abloh who has inherited the Lagerfeld mantle — that, in profile, ambition and reach he occupies the same sort of mind/cultural space for the Gen Y and Gen Z consumers and the social media age that Karl occupied for those who came before — is simply a pointed reflection of the choices the industry has made when it comes to its own value system and place in the consumer mind-set.

In pure biography the two are (duh!) very different. Mr. Lagerfeld, who was white and German, grew up in a hothouse of high culture and elitism in the first half of the last century, escaped to Paris as a teenager and apprenticed among the most historic French houses (Balmain, Patou) before beginning his career at Chloé.

Mr. Abloh, a black American, grew up in the suburbs outside Chicago, the child of Ghanaian immigrants, studied engineering in college and then architecture at the Illinois Institute of Technology, worked with Kanye West for a decade, and opened Off-White in 2013. His formal industry apprenticeship consisted of six months at Fendi.

One comes from the couture tradition; one built his career on street wear. One saw himself as the caretaker of artistic heritage (under Mr. Lagerfeld, Chanel acquired the specialty ateliers of embroiderers, hat makers and cashmere spinners in order to protect them); one has a keen awareness of himself as a harbinger of cultural change and breaker of boundaries.

Mr. Abloh is one of the rare black creative directors of a French heritage house, which makes his position particularly freighted and unusual. And yet in many ways they have met in the middle, which is kind of where fashion is these days.

Like Mr. Lagerfeld, who dabbled in photography and book publishing, and collaborated with brands that included H&M and Coke, Mr. Abloh has a seemingly voracious desire to put his creative mark on everything — anything — even if the end result seems slapdash. He possesses a belief in his own talent even if it is devoted to a project for only about five minutes. And he has a healthy disrespect for the pretensions and conventional wisdom of fashion.

Like Mr. Lagerfeld, Mr. Abloh has made his mark in part by embracing irony. Like Mr. Lagerfeld he has made a community that can seem like a cult of personality around himself. Like Mr. Lagerfeld, he speaks in rolling sentences and is a pleasure to listen to, especially in a world where the most celebrated names often seem to be tying themselves up in knots at the prospect of answering a question.

Mr. Lagerfeld blithely sprinkled his conversations with erudite references, as does Mr. Abloh, though his tend to be the references of popular intellectualism (Mies van der Rohe, Duchamp, Rem Koolhaas), while Mr. Lagerfeld’s were often obscure and extraordinary (the Danish illustrator Kay Nielsen and his 1914 children’s book, “East of the Sun and West of the Moon”).

Mr. Lagerfeld was criticized for doing too much, a lot of it not well enough, as is Mr. Abloh. So far, Mr. Abloh has proved himself best as a designer when building atop a foundation established by someone else. His Vuitton is more interesting than his Off-White, which often seems like a pallid copy of other people’s ideas, just as Mr. Lagerfeld’s Chanel was more effective than his namesake label. When left to create from scratch, the result on both parts was, and has been, less convincing.

Mr. Lagerfelds creativity was extraordinary when focused — his couture shows could be transcendent; he transformed Fendi and the whole idea of fur — but often it wasn’t, and the result could be self-indulgent.

Yet such was his myth by the late-20th century, even critics often overlooked his clunkier designs, as well as the fact that a proportion of what he did could seem dashed off and superficial.

Still, there were those who dismissed Mr. Lagerfeld as a “stylist,” just as there are many who refer to Mr. Abloh as an “art director,” though in both cases there are others who argue differently.

“I think he’s both a creator and an art director,” said Didier Krzentowski, the owner of Galerie Kreo, where Mr. Abloh recently had a show of graffiti-slashed concrete furniture. “In which case, I agree he is like Karl. What he made for me was genuinely unique, and that’s very hard to do. You can’t do it if you are only an art director. But maybe he’s an art director when it comes to fashion.”

One of the things that most upsets fashion people about Mr. Abloh’s rise is his propensity for fetishizing the shortcut. In The New Yorker, he called it “the three percent approach” (the theory that changing a design by that percentage is enough to make it qualify as new). At Harvard, he referred to it as his “cheat codes.”

There is a sense, dear to fashion, that the designer should be a tortured soul agonizing over the creative process (in part because of its insecurity complex in regard to more classic forms of art). To boast about doing so little is somehow unseemly. Yet Mr. Lagerfeld had no truck with that idea, and neither does Mr. Abloh.

In the end, Mr. Lagerfeld’s most significant contribution to fashion was the way he changed everyone’s idea of what it meant to be a great designer, reshaping it in his image as a jack-of-all-brands, able to enter a heritage house and reinvent it with both a sense of history and a willingness to make it relevant for a new cultural moment. He was, as the influencer Bryan Yambao said, the pioneer of “the idea of the multitasking designer.” Mr. Abloh is broadening that, to be a jack-of-all-design. John Hoke, the chief design officer of Nike, also called him a “pioneer.”

Whether that becomes a new benchmark — whether Mr. Abloh really is, say, the Jeff Koons to Mr. Lagerfeld’s Warhol, as Mr. Tonchi posited — is still too early to say. Mr. Abloh has decades left to work. He may turn out to be a flash in the pan, someone who becomes a footnote in fashion history, rather than an era. It is not hard to imagine him leaving clothes behind and heading off into the pop culture-technology nexus.

In which case the final judgment may depend as much on how the world evolves as how his clothes evolve; whether we continue down the road of reality TV, of value systems shaped as much by convenience as closely held moral codes, of businesses run by likes and follower numbers as much as the desire to create something genuinely new — or change direction.

When people were trying to wriggle out of the comparison between Mr. Lagerfeld and Mr. Abloh in a diplomatic way, they often said, “fashion has changed so much, the world has changed” that they couldn’t possibly connect them.