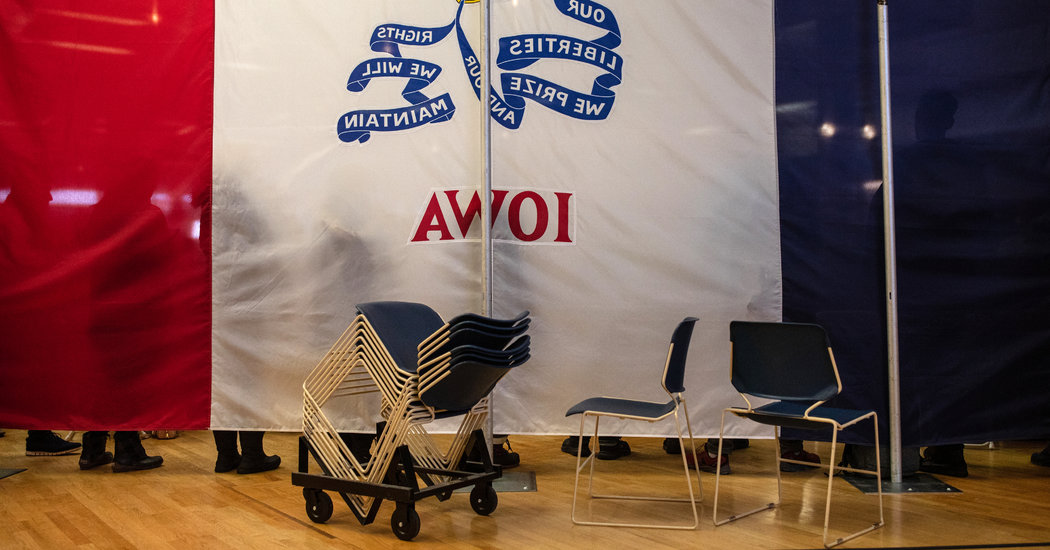 Iowa and New Hampshire. Here they come again, reliably in grim tandem, like the flu and gastroenteritis. Two small, unrepresentative states will set the terms of the Democratic presidential campaign, exerting far more influence over the nominating process than states that rank 32nd and 42nd in population have any right to.

This must end for Democrats. Everyone knows it. Everyone argues it. But then, everyone throws up their hands. Iowa has been first for nearly 50 years now, a position to which the Democratic Party has given its tacit assent. And New Hampshire — why, New Hampshire has a law stating that it must be the first primary. So there.

To which I say: So what? What the Democrats must do is simple. Stop giving the assent, and break the law. We need a little Democratic Party civil disobedience.

Let’s quickly review how Iowa came to have this position. After the calamity of 1968 (the convention riots, the Vietnam War schism), the party opened up the nominating process. States were encouraged to have primaries and caucuses.

Iowa adopted a cumbersome, four-stage nominating process, of which the caucuses were the first step. So it had to go early. Kathie Obradovich, a former opinion editor for The Des Moines Register, said last year that “the old story is that they figured out how long it would take to print all the paperwork on their elderly mimeograph machine.” Mimeograph machine!

So that’s how Iowa got the first vote.

To Iowa’s half-century, New Hampshire goes back a full century. It has held the first primary since 1920. But it was, again, after 1968, when state politicians saw the nominating system was being changed, potentially threatening New Hampshire’s primacy, that they passed a law saying it had to have the first primary.

As is often observed, the Democratic National Committee can’t do much about these dates. It’s the Constitution itself (Article I, Section 4) that says that states “shall” decide on the “time, place and manner” of their elections. So the committee can’t change the dates.

It can, however, do something else. It can ignore the two states.

That’s right. Let Iowa and New Hampshire hold their caucus and primary, but don’t participate. Make all the candidates agree that they won’t seek a spot on the ballot.

Impossible? That’s what everyone will say. But it’s not. Oh, I’m sure it’s all very complicated with respect to the committee’s bylaws. But bylaws can be changed, by people who want to change them.

The problem with Iowa and New Hampshire, as David Leonhardt laid out in detail in The Times, is that they are horribly unrepresentative of a party that is now, according to the 2017 Pew Typology Survey, 54 percent white, 19 percent each African-American and Latino, and 9 percent other. Iowa is 85 percent white non-Hispanic, and New Hampshire is 90 percent.

So what the Democratic National Committee needs to do is choose two other, more representative states. I would suggest Florida and Michigan. Florida is more diverse than the country as whole. The United States is 60 percent white non-Hispanic, 13 percent African-American, and 18 percent Latino; Florida is 54, 17 and 26. Michigan is somewhat less diverse than the country, at 75, 14 and 5, but at least the black population is representative, and there are other strong arguments for making an important Rust Belt state an early test.

These states are diverse in other important ways. They have major cities, smaller cities, suburbs, university towns and farms. They have economic diversity. And of course both are swing states with lots of electoral votes (29 and 16, respectively). They matter in a way Iowa and New Hampshire (six and four) do not.

I say Florida and Michigan, but take your pick. The point is, the Democrats should pick two large and diverse states — or it could be four states that are rotated, to add to the geographic diversity — and tell them to move their primary dates (and yes, primaries would be far, far preferable to caucuses) forward.

And then, let Iowa and New Hampshire do what they want, but just ignore them. The committee has some leverage here. It schedules debates. It should schedule them in Florida cities like Orlando, Tampa and Gainesville, and Michigan cities like Detroit, Lansing and Ann Arbor. Never in Ames or Manchester.

That’s a carrot. Now, here’s a stick. Impose a debate qualification that any candidate who seeks a ballot position in either state or spends more than three days campaigning there will be barred from the debate stage. Problem solved.

Yes, it’s hardball. But at this point, hardball is what’s needed. There is no rational argument against it. Well, maybe there’s one. Some will raise the possibility that treating the two states like this will ensure that the next Democrat running for president will lose the states and their electoral votes.

A generation ago, I would have believed this argument. But now, in this polarized country, I don’t. In the heat of a partisan general election campaign, given all the big things that are at stake now in every presidential election, Iowa and New Hampshire Democrats aren’t going to vote against their standard-bearer over a procedural move that many will know in their bones was justified. And my guess is that both states would object forcefully the first go-round, but after that would see they’d lost and just run up the flag and choose later dates.

Some traditions are oppressive, and some laws are bad. Democrats and liberals admire the Americans who’ve challenged them. I’m not saying the committee chair who takes on Iowa and New Hampshire will go down in history with Rosa Parks. But she or he will be lauded as the person who ended an anachronistic duopoly and brought the nominating process into the 21st century.