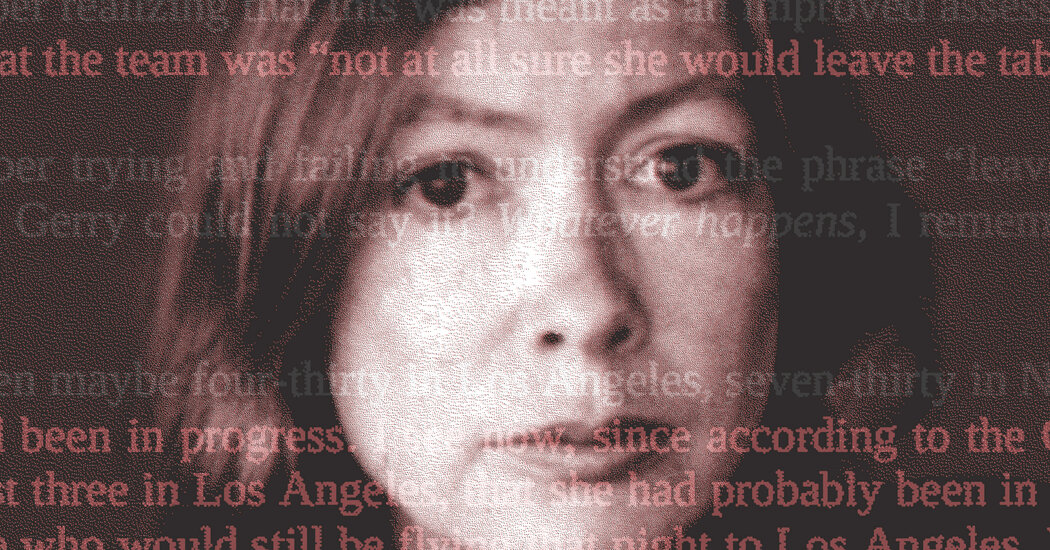 Joan Didion, who died on Thursday at the age of 87, inspired at least two generations of thieving impostors to break into her life’s work, strip it down to the studs and decorate it with their own boring neuroses. No one essay writer, except James Baldwin and George Orwell, has spawned more imitators. For 30 years, it seemed as if every issue of every magazine had at least one Didionism somewhere in its pages, whether a carefully curated list of items or one of the incantations she used to open sections. As it happens, I am in Death Valley ….

Writers should never reveal their influences because the touches are never quite as subtle or as evocative as they might seem. But when I heard the news of Didion’s death, I went through some of my own work and felt a surge of shame. I had stolen so much from her! When I was asked this year to profile the actor Steven Yeun, for example, I started with a 1,500-word, rambling prologue about myself and my own neuroses. The inspiration came from Didion’s 1965 profile of John Wayne, which I had first encountered when I was a 17-year-old who mostly typed out prose poems about “my generation” in the style of Allen Ginsberg and Jack Kerouac.

There’s a scene from the film “Amadeus” where Salieri comes across the evidence of Mozart’s genius, lying on an abandoned music stand. As Salieri reads through the sheet music, he falls into an aching trance and sees not only the proof of his own mediocrity, but also the evidence that the possibilities of life are much bigger than he has assumed. I felt something like this when I got to the end of “The White Album,” Didion’s 1979 essay collection about politics in California. I saw the photo of her yellow 1969 Corvette Stingray and read the perfectly balanced prose. Those essays strung themselves out in long sentences, but with a shape and force that had always eluded my former Beatnik heroes who replaced efficiency with an earnestness that felt increasingly childish with each Didion essay I read.

I spent the next 25 years trying to write like Didion. When I looked back at my work this week, she didn’t appear in trace amounts like nitrogen in the soil, but in full form, as if someone — namely, me — dug up her garden, shook out the crops and then took them off to a farmers’ market to sell them as my own.

I feel comfortable telling you this because I certainly am not alone. Modern American essayists are usually trying to emulate a set of foundational texts: Baldwin’s “Notes of a Native Son,” Orwell’s “On Shooting an Elephant” or “Reflections on Gandhi,” or Didion’s “The White Album” or “Goodbye to All That.” There’s no real need to out my fellow Didion-heads: They know who they are, and they most likely have told you about their own theft sometime in the days after her death.

But what is it about those early essays — “Slouching Towards Bethlehem” and “The White Album” — that inspires so much theft? As a general rule, essayists are either loved for their honesty or respected for their incisive politics. (Baldwin was the only one, in my estimation, who captured both.) Didion, for her part, did not start out as a particularly honest writer, although she would become one. She sometimes wrote in a confessional style, but that is not the same thing. Similarly, she didn’t have a particularly compelling or even clear political viewpoint in early works like “Slouching Towards Bethlehem.” That piece, in particular, relies on a stylistic trick: She declares the world is ending and then dumps a bunch of observations about Haight-Ashbury in 1967 in your lap and asks you to make all the necessary connections — the essay version of a “novel of short stories.”

Didion herself eventually grew wary of her own ambiguity and began to write in the straightforward, more explicit style most famously found in her 1991 16,000-word defense of the Central Park Five. But I am talking here about early Didion because that’s the Didion that hypnotizes so many young writers and dooms them to a lifetime of pale imitations.

The simplest explanation comes from the sentences themselves. Here’s one passage from “John Wayne: A Love Song”:

As it happened, I did not grow up to be the kind of woman who is the heroine in a Western, and although the men I have known have had many virtues and have taken me to live in many places I have come to love, they have never been John Wayne, and they have never taken me to that bend in the river where the cottonwoods grow. Deep in that part of my heart where the artificial rain forever falls, that is still the line I wait to hear.

When I first read those lines in high school, I fell in love with their author. This fact is neither novel nor particularly interesting; every dysthymic, literary 17-year-old falls in love with Joan Didion. But I also felt an immense sense of freedom: The Beats had been telling me that if I wanted to be a writer, I should immediately drop out of school and haul my ’87 Dodge Caravan across the country, feel every broken edge of this country and report back on how holy it all was. Didion, by contrast, told me that while I could do things like meet Eldridge Cleaver and Jerry Garcia in the summer of 1967 or even profile John Wayne, what my imagined readers wanted most was me.

Most Didion thieves start their careers of imitation after a similar type of revelation. An unkind critic might say that Didion inspired a generation of narcissists to do a lot less reporting. I find such charges absurd: Some of the biggest narcissists I’ve met in my career have been the same people who throw a tantrum every time they see the first-person and beat their chests over some silly missive like “give voice to the voiceless” or whatever. Nor do I think it is any easier to write about oneself than it is to fill a few notebook pages of quotes, call up an “expert” at Harvard and then render all that down into institutional sentences that are almost ostentatious in their lack of ambition. I prefer the interpretation of one of my professors in graduate school. After reading the introduction to “John Wayne” aloud in class, he yelled for what seemed like five minutes about the courage it took to undertake a profile of John Wayne and spend the first three paragraphs writing about the time you, your mother and your small brother saw some movies in a Quonset hut in Colorado Springs.

But I do think there is also something almost evasive about early Didion, something that does explain why so many have turned to her early work for inspiration. Just as she described New York City as a place for “the very young” in “Goodbye to All That,” “The White Album” and especially “Slouching Towards Bethlehem” can be read as templates for young writers who also may be at a loss for what they actually want to say, but still want to say it; who want to be honest, but have only really mustered up the courage to write in the confessional style they stole from Didion.

She presents herself in that early work as a largely unimpressed outsider who witnesses the grubby strivings of everyone from the Black Panthers to the Doors but admits not really understanding why they do what they do. She meets young people who have been edged out of society and can only really tell you about the drugs they do, the cringey rituals they perform and the oblique way they prove “the center was not holding,” whatever that means. She is always telling her readers, as she did in the first paragraph of “Bethlehem,” “I did not know what I wanted to find out.”

As I’ve grown older, I find myself becoming more and more disenchanted with the dispassion in those early works. Why was she so skeptical about the idealism of her peers? Why was she always going on about being a “fifth-generation Californian”? Why did she write in 1970, “if I could believe that going to a barricade would affect man’s fate in the slightest I would go to that barricade”? Had she not seen the changes that had taken place in the country because so many of her fellow citizens had done exactly that? Was she dismissing the civil rights movement, the Black, Latino and Third World consciousness movements that arose at Berkeley, her alma mater? Why, as Louis Menand pointed out in The New Yorker, did early Didion opt so often for the beautifully written yet ultimately opaque conclusion?

“She could see, with the X-ray clarity she appears to have been born with, what was happening on the street,” Mr. Menand wrote. “She could make her readers see it; but she couldn’t explain it.” As Didion herself wrote, “It’s easy to see the beginnings of things, and harder to see the ends.”

These knotty yet sometimes banal proclamations laid the foundations for Didion imitators, like me, who are always pointing out some ambiguity they could easily clear up with a few lines or a phone call. Once the line is delivered, they pause dramatically as their readers’ minds explode with wonder, not at the truth that’s been not-revealed, but at the grim honesty of the writer. I once thought that all good writing should be rooted in such daring confessions of what the author did not know, but I have begun to suspect that was because for all those years that I was imitating early Didion, I mostly saw writing as a performance in which I was the primary audience.

And yet, while I admire the later Didion who mostly dropped the affectations of her earlier work without compromising the steely, crafted prose or the allure of Joan Didion, its central character, I do not find myself revisiting it in the same way I compulsively reread “John Wayne: A Love Song” or “The White Album.” There is also a capaciousness in all those declarations of not-knowing. We imagine we may be able to fill in the blanks just as she would eventually do herself.