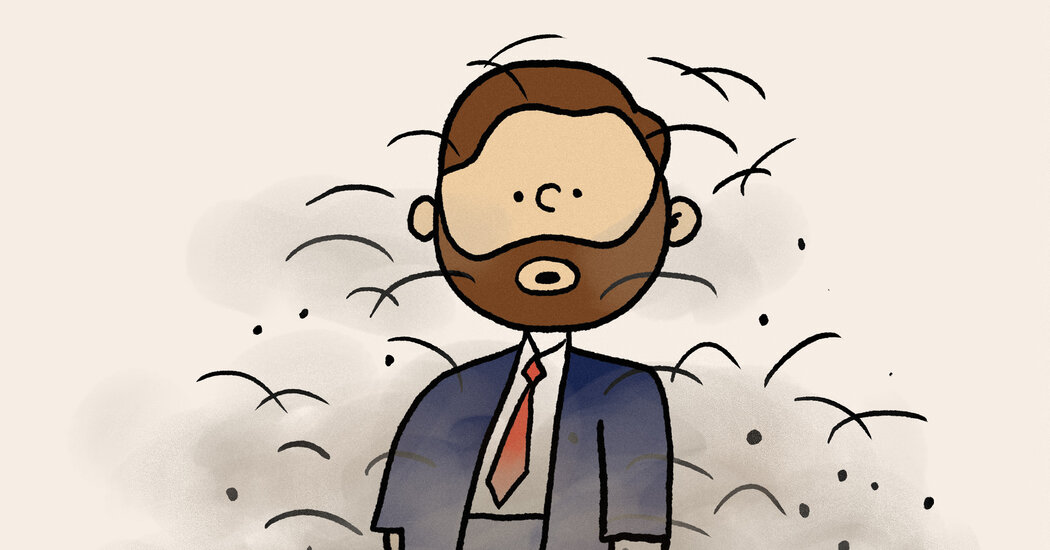 I seriously doubt that J.D. Vance has scraped the bottom of his barrel — it appears to be a roomy barrel, and he seems to be poised to sink lower and lower — but a tweet of his late last week will surely endure as one of the boldest markers of his descent.

It came shortly after Alec Baldwin’s apparently accidental shooting, with a prop gun, of a cinematographer. The cinematographer had died. And Vance, who identifies himself as “Christian” even before “husband” and “father” on his Twitter profile, appealed to the head of that social media platform to “let Trump back on” because “we need Alec Baldwin tweets.”

Interesting interpretation of “need.” Interesting interpretation of “Christian.” Interesting all around — but, more than that, sickening. Vance, who’s campaigning on his values as he seeks a Senate seat, uses a tragic killing as a timely calling to taunt a liberal actor and blow air kisses at a pathological ex-president. Never mind the loss of the cinematographer, Halyna Hutchins, 42, or the grief of her young son and others who loved her. Let’s mud wrestle.

Vance was hardly alone. Proving that the crab apple falls less than a millimeter from the tree, Donald Trump Jr. began using his website to sell, for $27.99, T-shirts with the message, “Guns don’t kill people, Alec Baldwin kills people.” What a wit. Which I mean as a suffix, with a nit just beforehand.

But Vance, the author of “Hillbilly Elegy,” is an especially sad story — an elegy all his own, though what has died isn’t a way of life but the dignity and decency that many politicians once felt compelled at least to pantomime.

He comes to politics as an outsider, the kind who usually pledges to liberate us from the muck. He comes from a period and a perch of acclaim, earned through the eloquence and empathy of “Hillbilly Elegy.”

But he has jettisoned eloquence and empathy to embrace the muck. His sequel to a distinctive best seller is a copycat narrative, the default Republican story these days, a tale of moral degeneration and flamboyant hypocrisy that has been told by Ted Cruz, by Kevin McCarthy, by almost too many members of Congress and would-be members of Congress to count.

Its theme: Whatever you said before, whatever you felt before and whoever you were before matter less than your fealty to Trump. Most Republicans have wagered that the road to office runs through Mar-a-Loco, where you must walk barefoot across the hot ashes of your incinerated pride to kneel at his throne and feed a bit of your soul to him.

Vance, to be sure, didn’t initially present himself as a liberal or Democrat or even any particular kind of Republican — not in his book, not in discussions of it. And the people whose estrangement from the American dream he focused on were, indeed, the people who found themselves courted by and drawn to Trump.

But he did express revulsion at Trump. “My god what an idiot,” he tweeted in October 2016, a month before the presidential election, in which he voted for a third-party candidate, Evan McMullin. Also on Twitter, Vance called Trump “reprehensible.” And elsewhere he complained that Trump was encouraging white working-class voters to wallow in anger and resentment, and avoid personal responsibility by blaming others for their problems.

Then Senator Rob Portman, an Ohio Republican, decided not to run for re-election in 2022 and Vance joined a crowded field of contenders for the Republican nomination for Portman’s seat. He had to compete against the Trump-worshiping likes of Josh Mandel, who has foamed at the mouth about “Mexican gangbangers” and “Muslim terrorists.”

Surprise, surprise: Vance deleted his old Trump-insulting tweets. He made his pilgrimage of atonement to Mar-a-Loco. He groveled. And he explained all of this in terms of Trump’s admirable performance as president, which supposedly won him over. He was clearly watching a different movie than many of the rest of us were.

Matt Lewis, a conservative columnist for The Daily Beast, wrote several months ago that Vance’s transformation was an “example of how Trump has co-opted or corrupted an entire generation of potential young conservative stars.” Lewis also noted that what Vance “has flip-flopped on is more than just Trump, it’s also the politics of anger and grievance and victimhood.”

Vance has devolved further since that column. On Twitter he bizarrely lashed out at the Times columnist Paul Krugman as “one of many weird cat ladies who have too much power in our country,” then went after Baldwin in a tactless way at a tactless time. So I’ll update Lewis’s assessment. Vance has flip-flopped on the politics of adolescent mockery as well.

But he gets points for occasional honesty. Shortly after declaring his Senate candidacy on July 1, in an interview with Molly Ball for Time magazine, he acknowledged his past opposition to Trump and bluntly conceded that he needed “to just suck it up and support him.”

Suck it up he has — and how. If this politics thing doesn’t work out for him, he has a potentially huge career as a vacuum.

When this feature of the newsletter last appeared, four weeks ago, I questioned the persistence and sexism of the phrase “maiden name” and digressed to mention a long-ago column of mine about the disproportionate abundance of slurs for women (versus men) who are deemed sexually permissive.

Many of you wrote in to note, rightly, that the aspersion inequality doesn’t end there. The English language, at least as practiced by Americans in modern times, is riddled with derogatory terms that refer only to women and have no match in the dictionary applicable to men.

Marilee Meuter of Chico, Calif., observed that a cantankerous but cute old man is sometimes called a curmudgeon while an irascible but adorable old woman is never called that — or, really, anything that captures the adorable smidgen. For old women, we have a cornucopia of put-downs: crone, hag, shrew, spinster (if she’s unmarried), biddy, battle-ax, harpy (if the insulter’s vocabulary is elevated), harridan (ditto). For old men we have … coot?

Beverly Connor of Berkeley, Calif., wrote: “The sexist word that has long bothered me is mistress. It is often used in media simply to describe the female lover of a married man. She may be financially independent, in no sense ‘kept,’ yet mistress she is. And for the male lover of a married woman there is no equivalent term.” Graham da Ponte of New Orleans made that same point.

And just as there’s aspersion inequality, there’s encomium inequality. I direct your attention to “the Great Man theory of history” (the italics are mine). And I thank Anne Kilkenny of Wasilla, Alaska, for directing my attention to it. (I’m struck by where she lives. Would a Great Woman theory of history include a former mayor of that city, whose recruitment for John McCain’s presidential ticket was one of the steppingstones to Trump?)

Claire Savage of San Francisco directed me to the book “Wordslut: A Feminist Guide to Taking Back the English Language,” by Amanda Montell, which was published in 2019.

Negative tropes about women are everywhere, and we can see this in the language used about them outside of specific names. Words like: “cougar,” “spinster” and “gold-digger” do not have offensive male equivalents — and their usage has made it into our day-to-day language.

Insults, too, are often biased against women. For example, consider the following phrases: “Don’t be such a girl.” “Don’t be a drama queen.” “You’re acting like a bitch.” — all phrases that suggest femininity is bad, or loaded with hysteria and malice.

“Words Worth Scrutiny” is a recurring feature. To suggest a term or phrase, please email me here, and please include your name and place of residence. You can also email me at that address with nominations for “For the Love of Sentences,” which will return next week.

What I’m Reading (and Watching)

On a Personal Note

Several weeks into the fall semester, during my usual Thursday office hours, one of the 15 students in the seminar that I’m teaching came to speak with me. He was masked. So was I. That’s the rule at Duke University: If two or more people meet in proximity in a nonresidential indoor setting, their mouths and noses should be covered. Mine are for all two and a half hours of my weekly seminar. So are my students’.

But during brief intervals on this one Thursday, the student in my office dropped his veil. I had some cookies from Trader Joe’s on my desk and offered him one. To take bites of it, he obviously had to lower his mask (which is allowed). And my thought wasn’t: risky. My thought was: That’s not your face!

I’d grown familiar with his hair, forehead and eyes but nothing else from there to his neck, and it turned out that my brain had theorized the rest, based on … what? I have no idea. But without realizing it, I’d presumptuously filled in the blanks, creating a mental image of him that was complete — and completely wrong.

There must be a metaphor there.

My classroom is a case in point. If I fashion a smile to flag the playfulness of a comment that I’m making, the students can’t see it. Maybe my eyes and my tone of voice tell the story, but maybe not.

The ambiguity travels both ways. I have to assess their intents — and their reactions — without access to the entire range of physical expressions of those. I’m frequently uncertain and consequently tentative. The room is colder than it might otherwise be. The vibe is more formal.

This isn’t a complaint. I remain an evangelist for caution when it comes to containing Covid: If we’d been more cautious from the start, we’d have saved many lives and be closer now to whatever the far side of this pandemic looks like.

This is just an observation. A rumination. The pandemic warped and continues to alter our social atmosphere, and while we often shudder at its amplification of the tensions in our exchanges, we less frequently note its simultaneous strangling and flattening of our dealings with one another.

I mourn the big, rich canvases of faces fully exposed. I crave the compass they give me for the navigation of a relationship. I miss the initial bloom of a smile. I miss even the first dark inklings of a scowl.