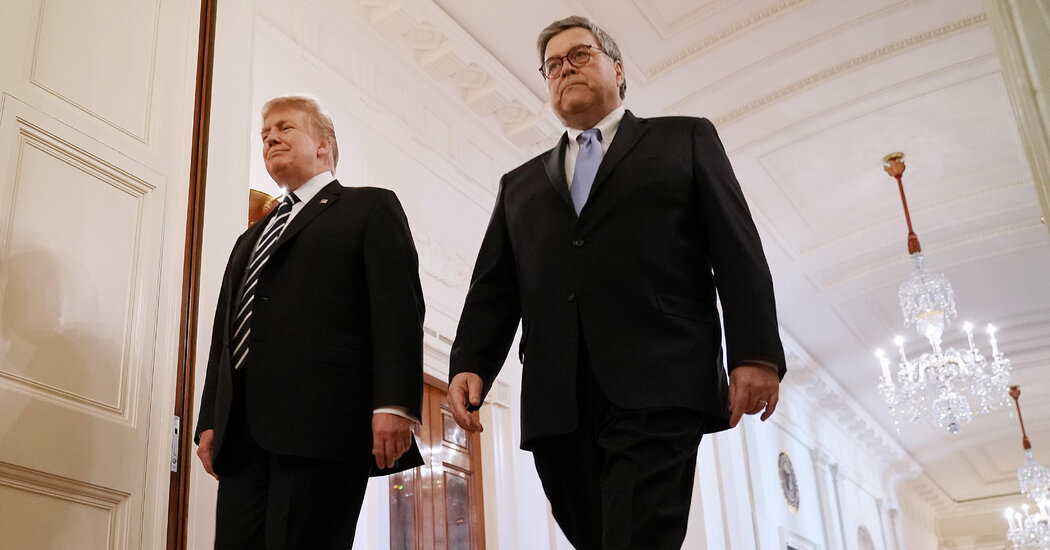 Today, Wednesday, marks 90 days before the presidential election, a date in the calendar that is supposed to be of special note to the Justice Department. That’s because of two department guidelines, one a written policy that no action be influenced in any way by politics. Another, unwritten norm urges officials to defer publicly charging or taking any other overt investigative steps or disclosures that could affect a coming election.

Attorney General William Barr appears poised to trample on both. At least two developing investigations could be fodder for pre-election political machinations. The first is an apparently sprawling investigation by John Durham, the U.S. attorney in Connecticut, that began as an examination of the origins of the F.B.I. investigation into Russia’s interference in the 2016 election. The other, led by John Bash, the U.S. attorney for the Western District of Texas, is about the so-called unmasking of Trump associates by Obama administration officials. Mr. Barr personally unleashed both investigations and handpicked the attorneys to run them.

But Justice Department employees, in meeting their ethical and legal obligations, should be well advised not to participate in any such effort.

The genesis of the department’s admirable practice of creating a protective shell surrounding an election recognizes that unelected officials at the Justice Department should not take action that could distort an election and influence the electorate. If someone is charged immediately before an election, for instance, that person has no time to offer a defense to counter the charges. The closer the election, the greater the risk that the department is impermissibly acting based on political considerations, which is always prohibited.

It is not mere conjecture that Mr. Barr could weaponize these investigations for political purposes. In both cases, he has already run roughshod over another related longstanding department practice. It holds that department officials should refrain from making public allegations of wrongdoing before prosecutors decide to bring charges, particularly since no charges may emanate from the investigation.

Mr. Barr and President Trump have shown no compunction in publicly discussing these investigations, suggesting wrongdoing by Democrats and deep staters. Mr. Barr promised on Fox News that “there will be public disclosure in some form” in the Durham probe. It should be no surprise that Mr. Barr has followed the lead of his boss; after all, Mr. Trump urged Ukraine to announce an investigation into Mr. Biden, an action that was at the center of his impeachment.

Not so long ago, Mr. Barr and Mr. Trump denounced Jim Comey’s negative public commentary in the 2016 election on Hillary Clinton. Indeed, the president claimed that Mr. Comey’s violation of these bedrock policies contributed to his being fired. During his nomination hearing, Mr. Barr told a Senate committee that he would adhere to these policies.

“If you are not going to indict someone, then you do not stand up there and unload negative information about the person,” he testified. “That is not the way the Department of Justice does business.” He also “completely” agreed with Rod Rosenstein when Mr. Rosenstein wrote in a memo that Mr. Comey’s transgressions during an election season were “a textbook example of what federal prosecutors and agents are taught not to do.”

Indeed, in his nomination testimony, Mr. Barr captured the risk of an attorney general acting for political purposes. Members of the incumbent party, he said, “have their hands on the levers of the law enforcement apparatus of the country, and you do not want it used against the opposing political party.”

He was correct then and is wrong now.

Nevertheless, Mr. Barr may claim that an extraordinary public justification exists for releasing a report, citing the Mueller report as precedent. But there is a very clear difference: The Mueller report was not issued in the run-up to any election.

Mr. Barr has another move to try to justify his actions. He recently told a conservative radio host that the policy on interference with an election applies only to indictments of “candidates or perhaps someone that’s sufficiently close to a candidate, that it’s essentially the same.”

That’s an invention. The policy itself refers to actions that give “an advantage or disadvantage to any candidate or political party.”

Mr. Barr himself recognizes the political effect of department actions beyond those against a candidate. In February, in response to the Justice Department inspector general’s recommendation for a clear policy to open or take actions in significant political investigations, Mr. Barr issued a directive that centralized his control over such investigations. The new Barr requirements covered investigations that “may have unintended effects on our elections” and notably included candidates, senior campaign staff members, advisers, members of official campaign advisory committees or groups, and foreign-national donors.

Take an example from the Mueller investigation. The special counsel’s office knew it could not indict Russian military intelligence officials for the 2016 hacking operation in the run-up to the 2018 midterm elections. That’s right: The office could not indict the Russians — not only political candidates or aides. Such matters were so politically fraught that such an action by the special counsel might affect the election.

A key consideration should not be lost: There’s no urgency for the department to take any overt investigative steps or make disclosures until after the election. Even if there has been criminal wrongdoing — which is by no means clear — charges can still be brought in November after the election.

What can be done if Mr. Barr seeks to take actions in service of the president’s political ambitions? There are a variety of ways for Justice Department employees in the Trump era to deal with improper requests. Employees who witness or are asked to participate in such political actions — who all swore an oath to the Constitution and must obey department policies — can refuse, report and, if necessary, resign. Other models include speaking with Congress under subpoena or resigning and then communicating directly to the public. Reputable organizations are at the ready to advise whistle-blowers about the risks and benefits of pursuing these paths.

Above all, with the election around the corner, it’s critical to ensure its integrity and that the Justice Department steer clear of political interference.

Ryan Goodman is co-editor in chief of Just Security. Andrew Weissmann was a senior member of the Special Counsel’s Office and is the author of the forthcoming book “Where Law Ends: Inside the Mueller Investigation.” They are professors at N.Y.U. School of Law.