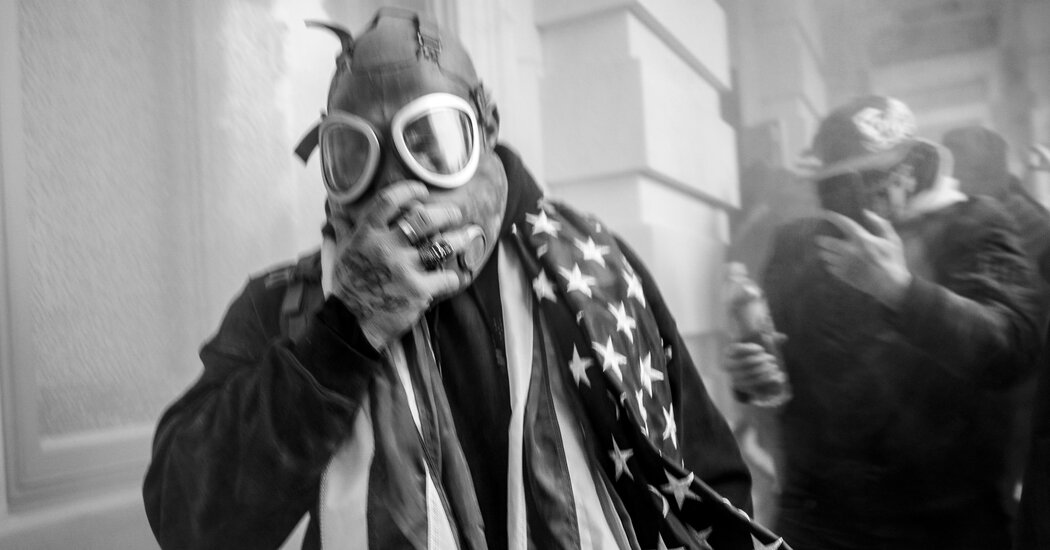 For many Americans, the events of Jan. 6 brought the issue of domestic violent extremism to the fore. Through livestreamed images, they watched as attackers equipped with zip ties and bear spray wielded flagpoles and fire extinguishers, pushed through barricades, smashed windows and called for the deaths of elected officials while gallivanting through the halls of Congress. Gallows were constructed outside. Pipe bombs were planted near the headquarters of the Democratic and Republican National Committees. At least seven people died. More catastrophic violence was narrowly averted.

Until that day, violent attacks targeting powerful symbols of America were generally seen as a threat emanating from beyond the country’s borders, like the Sept. 11 attacks.

America’s elected leaders vowed in 2001 to never again let such violence reach its soil. Within just 14 months of the Sept. 11 attacks, Congress authorized an entire new agency devoted to homeland security. The United States would come to commit trillions of dollars to post-9/11 war spending, including over $1 trillion for federal efforts to prevent and respond to terrorism. Intelligence and law enforcement agencies were given seemingly infinite resources to refine their abilities to surveil and neutralize terrorism suspects and terrorist groups.

Aimed at foreign extremist groups on the fringe of society, like ISIS and Al Qaeda, conventional terrorism tools worked to a great extent: Since Sept. 11, no terrorist group outside the United States has successfully executed a major, lethal attack inside the United States.

Nearly 3,000 people were killed on 9/11. Today, however, the most urgent threat to Americans’ safety and security comes not from foreign terrorists but from the country’s own citizens. And the threat is aimed at the future of democracy itself.

What makes the threat especially pernicious is that it is not from the fringe but from the mainstream; according to one study, a majority of the arrested Jan. 6 attackers were employed, some of them teachers, chief executives, veterans, doctors and lawyers. They had an average age of around 40. So it’s easy to see why the U.S. government’s traditional counterterrorism infrastructure, built to focus on fringe extremists, is falling short, having foiled only 21 of the 110 known domestic terrorist attacks and plots in 2020, according to the Center for Strategic and International Studies, and failing to prevent the violence and chaos of Jan. 6.

It’s not a stretch to imagine that another Jan. 6 could happen: Amid rampant electoral disinformation, Americans are increasingly prepared to support political violence. Broad swaths of the population refuse to accept the results of a national election, with around only a third of Republicans saying they will trust the results of the 2024 election if their candidate loses. American democratic norms are visibly deteriorating, landing the United States on a global list of “backsliding” democracies in November.

This is why the U.S. government has to stop treating rising political violence and domestic extremism solely as a security problem; otherwise, we will be left with major blind spots in our strategies to combat violent extremism.

In the two decades I’ve been studying extremism, I’ve seen pathways to radicalization change sharply. Throughout much of the 20th century, would-be extremists could really gain access to extremist content only after joining a group — such as the Ku Klux Klan or an unlawful militia organization — with a set ideology, initiation rites and a clear leadership and chain of command. Extremist content had to be sought out.

Today, extremist content is readily available online, in the form of manifestoes, memes, videos and audio that anyone can produce and share. Everyone is just a few clicks away from an ever-expanding series of rabbit holes that offer up whole worlds of disinformation and hate.

Counterextremism tools designed to address threats from fringe groups cannot meaningfully confront the threat from the political mainstream. As violence becomes more spontaneous, less organized and more tied to online radicalization, it is harder to prevent it with strategies that rely on coherent plots and formal group hierarchies.

Because extremist ideas are no longer limited to an isolated, lone-wolf fringe, the United States should focus less on isolating and containing a few bad cells and more on reducing the fertile ground in which anti-democratic and violent extremist ideologies thrive. It needs a public health approach to preventing violent extremism.

This means that federal, state and local governments should invest in and promote digital and media literacy programs, civic education and other efforts to strengthen democratic norms and values. American leaders should lead by example in rejecting disinformation, propaganda, online manipulation and conspiracy theories. It’s not an easy fix, and this shift in mind-set will not happen overnight, but inclusive, equitable democracies make it harder for extremist ideas to take root and spread.

No one wants the federal government to police people’s beliefs. But the U.S. government’s focus on using conventional counterterrorism tools fails to account for the generally unchecked spread of disinformation and conspiracy theories, propaganda targeting racial and religious minorities and the increasing dehumanization of those with whom one disagrees. These are important precursors to violence.

What would Jan. 6 have looked like if policymakers had focused on these precursors? Many of the Americans who stormed the Capitol last year were immersed in a universe of disinformation that convinced them that they were heroes acting to save democracy.

Some of them later expressed regret for their actions and shame about how easily they had been manipulated. “He now realizes he was duped into these mistaken beliefs” about a stolen election, a lawyer for Dominic Pezzola, who is alleged to have been a member of the Proud Boys, explained.

A public health approach to preventing violent extremism would shift prevention work away from security and intelligence experts — away from wiretaps and cultivated informants — and toward social workers, school counselors and teachers, mental health experts and religious leaders to focus on social support and democratic resilience.

In a world where America embraced such an approach, Mr. Pezzola’s life would look very different. First, because he would have been taught in school or through programs in sports clubs or faith communities to recognize disinformation, he’d be less susceptible to claims about a stolen election. Were he to flirt with these claims and mention them to a family member or friend, the relative or friend would know how to get help — just as many do today for difficult issues such as suicidal ideation and substance addiction. There would be dedicated resources, like a toll-free support line or gatherings akin to Alcoholics Anonymous meetings, that could offer counseling and intervention support to discourage him from radicalization.

In this world, ideal as it might seem, Mr. Pezzola and the thousands like him never would have shown up at the Capitol in the first place. No approach can totally prevent radicalization, but a more holistic one is better suited to defend against mainstream extremism.

This model would be similar to the post-World War II German approach known as defensive democracy, premised on the idea that the best way to reduce insider extremist threats is to strengthen mainstream society against them. In 2020 — amid rising global and domestic extremist threats and repeated scandals revealing far-right infiltration within intelligence and security services — Germany announced a three-year initiative to combat extremism, dedicating more than 1 billion euros to treat it not just as a security threat but also as a societal problem.

The United States has made some encouraging moves on this front, but more needs to be done: The Department of Homeland Security doubled its budget for programs aimed at preventing radicalization to violence. The Defense Department held a militarywide stand-down to train everyone in the military on the threat of domestic extremism. And in June the Biden administration released the first national strategy to combat domestic terrorism. It makes broad leaps in recognizing the role of public health-style prevention, the need for gun control and the need to combat racism as parts of this approach.

We will always need strategies to stop plots and reduce the potential for planned violence against the public. But traditional approaches to combat such violence are a Band-Aid solution to the challenges America faces today.

Nearly two decades ago, the authors of the 9/11 commission report told Americans that the most important counterterrorism failures were failures “of imagination.” We are thwarted today by the same problem. It isn’t that we lack the will or the resources to combat violent extremism. We are failing instead to reimagine what prevention should look like for an extremist threat that has migrated from the fringe to the mainstream.

Cynthia Miller-Idriss is a professor at American University, where she leads the Polarization and Extremism Research and Innovation Lab. She is the author, most recently, of “Hate in the Homeland: The New Global Far Right.”