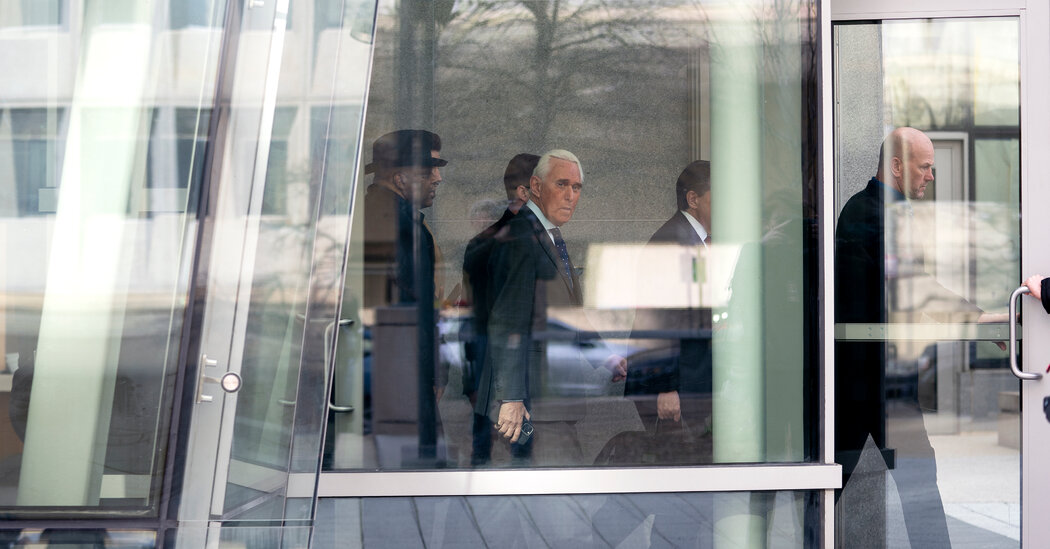 As the panel continues to take testimony, it is looking to do more analysis of social media and possible foreign efforts to sow discord in the U.S. before the Capitol riot.

WASHINGTON — The House committee investigating the Jan. 6 assault at the U.S. Capitol is weighing whether to hire staff members who can analyze social media posts and examining the role foreign adversaries played in sowing divisions among Americans over the outcome of the presidential election, according to two people briefed on the committee’s decision making.

The new avenues of inquiry come as the committee, which currently has about 40 staff members, continues to subpoena testimony and documents.

Witnesses this week included William J. Walker, the former commander of the D.C. National Guard, who has said military leaders delayed the guard response on Jan. 6, and the conservative activist Dustin Stockton, whose lawyer said he is turning over a “treasure trove” of documents that would have senior Trump allies and lawmakers “quivering in their boots.”

Mr. Stockton and his fiancée, Jennifer L. Lawrence, assisted in organizing rallies after the election advancing false claims about its outcome. But Mr. Stockton has said he was concerned that a march to the Capitol on Jan. 6 while Congress was certifying the election would mean “possible danger,” and that his urgent concerns were escalated to Mark Meadows, the White House chief of staff at the time, according to the committee.

The political operative Roger J. Stone Jr., a close ally of former President Donald J. Trump, appeared before the committee for a deposition on Friday. But he invoked his Fifth Amendment right against self-incrimination to each of the panel’s questions because, he said, he feared that Democrats would fabricate perjury charges.

“I did my civic duty and I responded as required by law,” Mr. Stone said after the deposition. He then criticized the investigation as “Witch Hunt 3.0,” and accused the government of hiding potentially exculpatory video evidence about the attack on the Capitol.

Mr. Stone has claimed that he was leaving town as rioters stormed the Capitol. “I did not march to the Capitol. I was not at the Capitol,” he said, adding that he believed the violence was “illegal and politically counterproductive.”

But Mr. Stone promoted his attendance at the rallies on Jan. 5 and 6, solicited support to pay for security through the website stopthesteal.org and used members of the Oath Keepers militia group as personal security guards while he was in Washington. At least two of those members have been indicted on charges that they were involved in the Capitol attack.

To bolster the public’s understanding of the attack, the committee is considering hiring several new staff members to analyze the vast amount of information that Mr. Trump’s supporters posted on sites like Twitter, Facebook, Parler and YouTube in the weeks before and after the attack. These digital footprints could help congressional investigators connect players and events, or bring to light details that witnesses might not know or remember.

Federal prosecutors have relied on hundreds of thousands of pieces of digital evidence to identify and support charges against more than 700 defendants who have been arrested in nearly every state for their part in the attack.

The committee’s investigators are also seeking to understand whether foreign governments were able to exploit and deepen social divisions created by Mr. Trump’s refusal to concede his election loss. Foreign adversaries have long tried to damage America’s national security interests by exacerbating social unrest and polarization.

Key Figures in the Jan. 6 Inquiry

The House investigation. A select committee is scrutinizing the causes of the Jan. 6 riot at the U.S. Capitol, which occurred as Congress met to formalize Joe Biden’s election victory amid various efforts to overturn the results. Here are some people being examined by the panel:

Donald Trump. The former president’s movement and communications on Jan. 6 appear to be a focus of the inquiry. But Mr. Trump has attempted to shield his records, invoking executive privilege. The dispute is making its way through the courts.

Mark Meadows. Mr. Trump’s chief of staff, who initially provided the panel with a trove of documents that showed the extent of his role in the efforts to overturn the election, is now refusing to cooperate. The House voted to recommend holding Mr. Meadows in criminal contempt of Congress.

Republican congressmen. Scott Perry, Jim Jordan, Andy Biggs, Paul Gosar, Louie Gohmert and Mo Brooks, working closely with Mr. Meadows, became key in the effort to overturn the election. The panel has signaled that it will investigate the role of members of Congress.

Phil Waldron. The retired Army colonel has been under scrutiny since a 38-page PowerPoint document he circulated on Capitol Hill was turned over to the panel by Mr. Meadows. The document contained extreme plans to overturn the election.

Fox News anchors. ​​Laura Ingraham, Sean Hannity and Brian Kilmeade texted Mr. Meadows during the Jan. 6 riot urging him to persuade Mr. Trump to make an effort to stop it. The texts were part of the material that Mr. Meadows had turned over to the panel.

Steve Bannon. The former Trump aide has been charged with contempt of Congress for refusing to comply with a subpoena, claiming protection under executive privilege even though he was an outside adviser. His trial is scheduled for next summer.

Jeffrey Clark. The little-known official repeatedly pushed his colleagues at the Justice Department to help Mr. Trump undo his loss. The panel has recommended that Mr. Clark be held in criminal contempt of Congress for refusing to cooperate.

John Eastman. The lawyer has been the subject of intense scrutiny since writing a memo that laid out how Mr. Trump could stay in power. Mr. Eastman was present at a meeting of Trump allies at the Willard Hotel that has become a prime focus of the panel.

The committee has also discussed examining whether foreign adversaries had any other connections to the assault on Congress, according to a person briefed on that part of the inquiry.

In mid-December, an “enemies list” of prominent people who did not support Mr. Trump’s lies about the election circulated online, including on a website called Enemies of the People. The F.B.I. investigated and attributed the list to an Iranian disinformation campaign that sought to capitalize on the “Stop the Steal” movement to sow divisions.

In November, the Justice Department indicted two Iranian hackers for seeking to influence the 2020 election by sending threatening messages to several thousand voters. Many of the messages were designed to look like they were from the Proud Boys, the right-wing extremist group.

Even as House Republicans have condemned the investigation as a political witch hunt, the committee found support this week from Senator Mitch McConnell of Kentucky, the top Republican in the chamber. Mr. McConnell, who in May led a filibuster that blocked the creation of an independent commission to investigate the attack, said this week that he believed the House committee was uncovering valuable information.

“It was a horrendous event,” Mr. McConnell said of the Capitol siege in a TV interview. “I think what they are seeking to find out is something the public needs to know.”