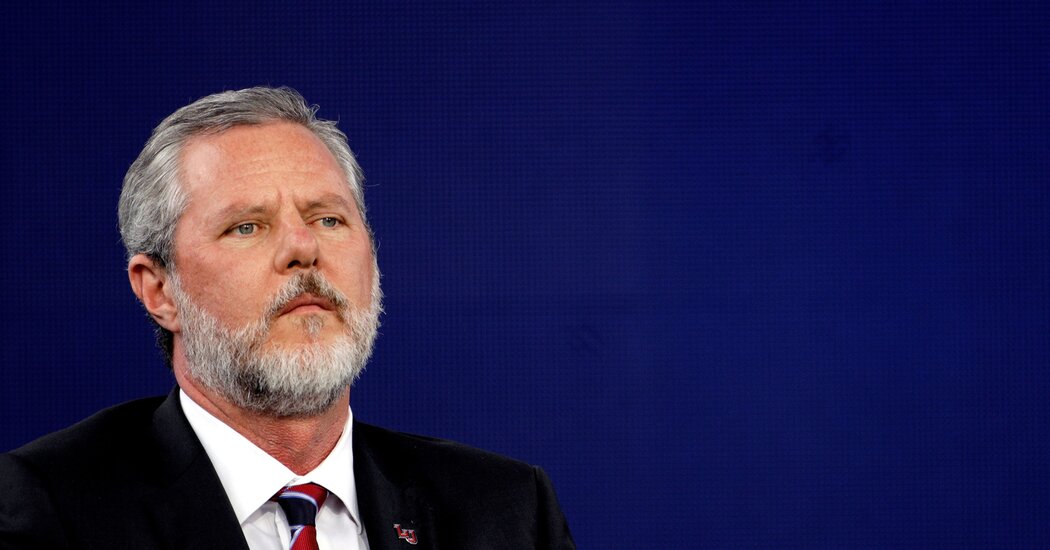 Jerry Falwell Jr. had long made a point of emphasizing that he was not trying to be a moral leader. He made crude jokes, insulted fellow Christians and was photographed partying on yachts and in nightclubs. But he rarely apologized or expressed regret. “I have never been a minister,” he explained on Twitter last year. He liked to tell reporters that Jesus did not tell Caesar how to run Rome.

That was always an unusual stance for the head of a distinctly evangelical institution. But Mr. Falwell pulled it off until recently, coasting by on a combination of success — Liberty’s endowment grew to $1.6 billion under his watch — and good will engendered by lingering institutional fondness for his father, who founded the school and was both a minister and an administrator.

On Tuesday, after a chaotic 48 hours in which a sex scandal emerged and Mr. Falwell resigned, changed his mind and then changed it back again, he was officially out as president and chancellor of Liberty University, the influential evangelical institution in Lynchburg, Va. Many students and others with ties to the school greeted his departure with relief. A seemingly constant flow of controversies was finally over.

“I wasn’t expecting him to be a spiritual leader, but I was expecting him to be a spiritual example,” said Eli Best, a junior who is majoring in mechanical engineering and whose brother Calum co-founded Save 71, an alumni group that worked to oust Mr. Falwell. “The president of a university not abiding by his own standards, in terms of bars and alcohol and sexuality — all those stories, that tipped me off. It was like a flashing sign in our faces.”

Added Brooke Smoke, a senior English major, on Mr. Falwell’s departure: “I think everybody has been waiting for this. Thank God, the witch is dead.”

Mr. Falwell suggested he was happy to move on. “The quote that keeps going through my mind this morning is Martin Luther King Jr: ‘Free at last, free at last, thank God almighty I’m free at last,’” he told a Lynchburg newspaper reporter on Tuesday afternoon. Mr. Falwell did not respond to requests for comment from The New York Times.

Monday was the first day of classes for the fall semester at Liberty. On a campus where class sessions often open in prayer, some professors referred to the uncertainty of the moment, and encouraged students to pray for both the institution’s future and the Falwell family. The campus pastor, David Nasser, posted a tweet to remind students that the campus chapel was open 24 hours a day for prayer and counsel. Mr. Nasser was to address students directly at a worship service on Wednesday evening.

Mr. Falwell had been on leave since Aug. 7, following backlash to a photograph he posted to Instagram in which he posed with his pants partially unzipped and his arm around a young woman he later said was his wife’s assistant. He was holding a glass of dark liquid that he joked in the caption was “just black water.” Students and faculty at Liberty are forbidden from consuming alcohol, and the student honor code encourages students to follow “common-sense guidelines to avoid the appearance of impropriety.”

“When you say you train champions for Christ, you want a champion for Christ to lead the organization,” said Brandon Pickett, a pastor and Liberty graduate, referring to the school’s longtime motto. “That means a champion for Christ who leads a Christlike life in private and public.” Mr. Pickett now teaches at Liberty as an adjunct professor, and his two children are enrolled as students.

Mr. Falwell’s departure was the culmination of a remarkable sequence of events beginning Sunday night, when Mr. Falwell issued a statement claiming that his wife, Becki, had a sexual relationship with a man who later tried to extort the couple in exchange for silence. The statement appeared to anticipate an interview with Reuters that appeared the next day, in which the man, Giancarlo Granda, claimed he met Ms. Falwell regularly for sexual liaisons, with Mr. Falwell looking on.

In a statement on Tuesday, Mr. Granda denied that he had tried to extort the family and called Mr. Falwell “a predator” while alleging more misconduct. He also acknowledged that when questioned about it last year by The Times, he denied that an affair had taken place.

The scandal resulted in swift action from the university’s conservative board of trustees, handpicked for their loyalty to Mr. Falwell and his father, Jerry Falwell Sr., though Mr. Falwell’s departure was as rocky as his recent tenure at the school.

On Monday afternoon, he told the board and reporters that he was resigning but then abruptly reversed course, before eventually sending a resignation letter late in the evening.

The board’s executive committee met on Tuesday morning and voted to accept Mr. Falwell’s resignation immediately. The full board then convened an emergency conference call and unanimously confirmed Mr. Falwell’s departure. He will receive severance as dictated by his employment agreement, according to the board’s statement, which did not specify the amount. He also resigned from his seat on the board.

The tawdry details of the scandal involving Mr. Granda ensured that the news spread quickly on the campus of 15,000 residential students. John Sharp Jr., a sophomore majoring in business administration, said he and colleagues on campus had listened to a 2018 audio clip, published by Reuters, purported to be of a conversation between the Falwells and Mr. Granda. In it, someone identified as Mr. Falwell jokingly said that Mr. Granda’s relationships with other women might make Ms. Falwell jealous.

“We just listened with our jaws open,” Mr. Sharp said. “We’ve heard Jerry and Becki’s voices many times in Convo,” he said, referring to the university’s twice-weekly gatherings of students. “It was unmistakably their voices.”

Mr. Falwell turned Liberty into a hugely influential institution. But he also found himself at the center of multiple controversies.

In the wake of a mass shooting in San Bernardino, Calif., in 2015, he told students at an all-campus gathering that if more people had concealed-carry gun permits, “we could end those Muslims before they walked in and killed us.” He was accused of blurring the borders between Liberty and his family’s finances. He depicted himself as a provocateur on Twitter, where he often insulted other Christian leaders. And his brickbats attracted increasing media attention after his surprise endorsement of Donald J. Trump for president in early 2016.

In their statement announcing Mr. Falwell’s departure, board members emphasized their spiritual responsibilities. “I am so encouraged by the unity of Christ that I saw exemplified by our board today,” Allen McFarland, the board’s acting chair, said. “Liberty University’s future is very bright and in capable hands of leaders who are committed to being good stewards of what the Lord has entrusted.”

Jerry Prevo, a retired pastor who has been serving as acting president during Mr. Falwell’s leave of absence, said he intended to nurture students’ “spiritual side.” Mr. Prevo will remain in the role of acting president indefinitely.

“We almost had a monarchy, but you don’t see that at any other university, where presidents are chosen based on their skills and abilities,” said Tavia Bruxellas, a senior who is president of the student government Senate. “Everybody just sees Liberty as this big Republican university, and students are really tired of that.”

“We’re praying for the Falwell family and hoping for the best,” she added, “but we’re ready to let Liberty do what Liberty does best.”