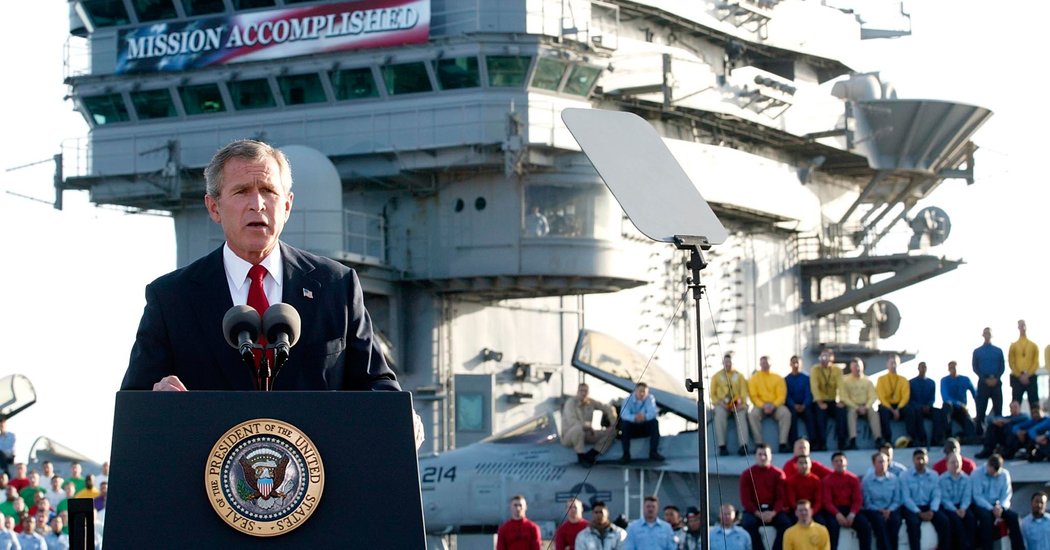 We know that a bad economy tends to hurt the electoral prospects of incumbent presidential candidates. But what about a crisis of national security or American safety? Although the coronavirus pandemic is unprecedented in most ways, as is the Trump presidency itself, there may be historical lessons from other situations.

I’m thinking of one in particular: The American experience in Iraq leading up to the face-off of 2004 between George W. Bush and John Kerry. It provides a cautionary note for those who assume that because President Trump has made numerous mistakes during the coronavirus crisis, he will be the underdog come the fall.

In spring 2004, it looked like a tight race, and the challenger led the incumbent in some early polls. Yet Mr. Bush ultimately won the fall election by some three million popular votes and by an Electoral College tally of 286 to 251. The economy was not in collapse at that time, as it is today. But the nation’s top national safety and security problem — the Iraq war — was in a bad state and getting worse. After the overthrow of Saddam Hussein in early April 2003 and Mr. Bush’s infamous “mission accomplished” speech aboard the Abraham Lincoln aircraft carrier on May 1, Iraq spiraled consistently downward over the months leading up to Election Day.

By the summer of 2003, it was becoming apparent that resistance forces in Iraq were not just what Defense Secretary Donald Rumsfeld called “dead enders” — leftovers from the Hussein inner circle who would soon be rounded up. The first big car bombings took place in August, taking the lives of a top Iraqi cleric and the United Nations’ special representative to Iraq, Sergio Vieira de Mello. U.S. fatality rates remained stubbornly in the range of about 30 to 40 troops a month. Earlier predictions by Bush administration officials that most American forces would soon be home were recognized as fantasies. As the year ended, U.S. monthly troop fatality rates climbed into the 40s, even after Mr. Hussein was captured.

Then 2004 hit, with a vengeance. The defining moment was the April fighting in Falluja and Ramadi — a month during which 131 American troops lost their lives, and four contractors were killed and dismembered for all the world to see. Through the rest of the year, until Election Day in the United States, American troop loss rates ranged from 50 to 70 or more each month. The estimated size of the resistance, as we tabulated in Brookings’s “Iraq Index,” quadrupled to 20,000 in the course of the year — though no one knew the actual numbers. American troop numbers in country, having declined modestly to 122,000 over the course of the year from about 150,000 in the spring of 2003, returned to 140,000 in 2004.

The official U.S.-led and U.N.-approved occupation of Iraq ended in June 2004. But any sense of “liberation” among Iraqis did not produce stability in the months that followed.

Yet Mr. Bush won the U.S. election. He did so after 18 straight months of bad news in what was his signature foreign policy initiative. The invasion of Iraq was a war of choice started with poor preparation for the likelihood of chaos and violence after the overthrow of Mr. Hussein. How could this happen, and what are the implications for today?

First, although virtually everything the Bush administration had tried up to that point had failed, the president did not give up in Iraq. New theories of the case were developed for salvaging a very bad situation — or at least minimizing the American role going forward. Even if we knew by then that Iraq had no weapons of mass destruction or clear ties to any of the Sept. 11 hijackers, the administration increasingly justified the Iraq mission as part of a larger democracy-and-freedom agenda. Nor was Iraq without some hopeful signs that could be trumpeted in a political campaign. Electricity production was back up to prewar levels, with reasonable flows of oil resuming as well. Three Iraqi votes were being planned for 2005 — first to create an interim government, then to bless a new constitution, then to elect a regular government.

I believe that John Kerry would have handled Iraq much differently and more effectively if he had been president in 2003 and 2004. But that was not the question before voters in November 2004 — just as what Joe Biden might have done differently to date about the coronavirus will not be the main question in November. Debates about the past are fair political game, but they are rarely conclusive in the middle of a crisis. Americans want to know about the plans going forward, not so much the mistakes already made. And Mr. Kerry’s ideas about Iraq going forward in late 2004 were not radically different from Mr. Bush’s.

By Election Day, Mr. Kerry had been tarred with the “flip-flopper” image. The Bush team sowed doubt about Mr. Kerry’s leadership skills and his ability to take Iraq in a better direction come 2005.

What should this historical analogy instruct the Biden team to do in 2020? At least one thing seems clear: In choosing a vice-presidential candidate, Mr. Biden should prioritize how his political partner will help him develop, articulate and ultimately carry out a forward-looking, comprehensive plan for the chief threat facing the country today.

Michael E. O’Hanlon is a senior fellow and director of research in foreign policy at the Brookings Institution.