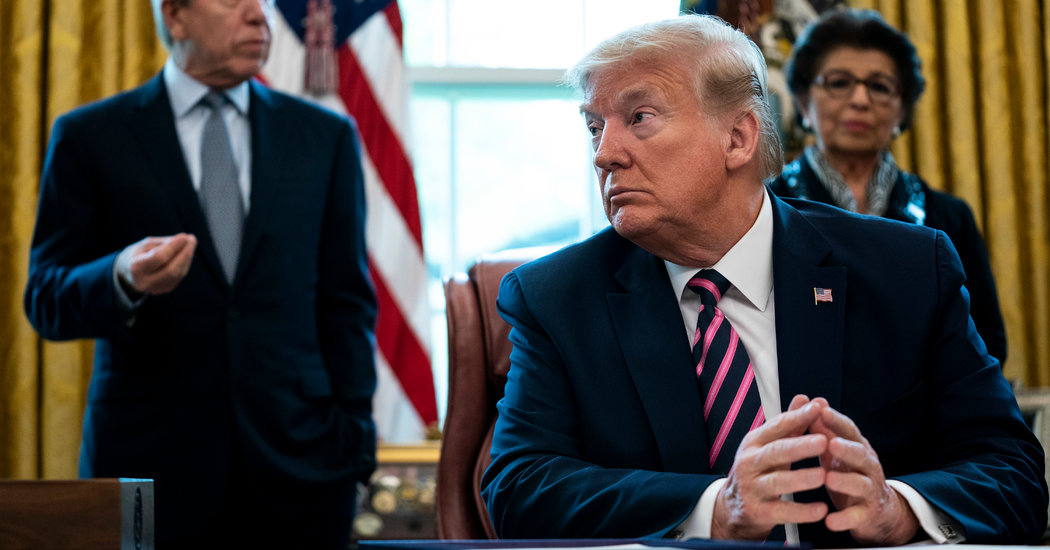 For months, Joseph R. Biden Jr. has argued that under pressure and political duress, President Trump may pursue increasingly extreme measures to stay in power.

In November, Mr. Biden said he feared that “as the walls close in on him he becomes more erratic. And I’m genuinely concerned about what he may do in order to try to hold on to the office.”

In January, Mr. Biden fretted: “He still has another nine or 10 months. God knows what can happen.”

And on Thursday, he added some urgency to his warnings, suggesting that Mr. Trump might try to delay or otherwise disrupt the election.

“Mark my words, I think he is going to try to kick back the election somehow, come up with some rationale why it can’t be held,” Mr. Biden said at a fund-raiser, according to a news media pool report. Mr. Trump, he suggested, is “trying to let the word out that he’s going to do all he can to make it very hard for people to vote. That’s the only way he thinks he can possibly win.”

It was an extraordinary claim for the presumptive Democratic nominee to make about an opponent, especially for Mr. Biden, a former vice president and Washington veteran who prides himself on civility and respect for American institutions, including and especially the presidency.

But as early polls show that Mr. Trump is vulnerable in several key battleground states, and as the president dispenses conflicting and often misleading information at his daily briefings on the coronavirus, Mr. Biden’s remarks amounted to a warning shot that attempts to frame for the public — to his advantage — what may be the ugliest election in recent American history.

“It very much is reflecting the fear that a lot of people have about how President Trump is going to respond later in the year to this election, especially if he continues to see his polls drop, and if he continues to flail and lash out,” said Chuck Hagel, who served as defense secretary in the Obama administration and before that as a Republican senator from Nebraska, and who hosted Mr. Biden at a fund-raiser this month.

Mr. Hagel said he had heard widespread concerns “about what President Trump may pull, especially if he sees he’s losing.”

Mr. Trump has not moved to delay the election, and Mr. Biden, who once taught constitutional law, most likely knows as well as the voting experts do that it would be exceedingly difficult to postpone the election and that the president does not have the authority to unilaterally take such action.

Mr. Biden’s campaign declined to comment further on his comments from Thursday night.

Mr. Biden’s escalating remarks about Mr. Trump’s approach to the election come as a number of polls have shown that many Americans disapprove of the president’s stewardship of the crisis, and that he badly trails the nation’s governors and his own medical experts in terms of whom Americans trust most for guidance.

Mr. Biden is a passionate critic of Mr. Trump’s character, and his latest remarks appeared to be another effort to convince voters that the president is desperate for victory at any cost.

Of course, character attacks on Mr. Trump are not enough to win the presidency — in 2016, Hillary Clinton and her campaign spent months lashing Mr. Trump’s integrity to no avail. Mr. Biden is also aware of the need for a broader, more tangible message this cycle, especially at a moment of economic disaster for many Americans.

And despite the current health and financial problems facing the nation, Republicans say there is still time for Mr. Trump to push a recovery narrative before November.

And a Republican National Committee spokesman, Steve Guest, called Mr. Biden’s comments “an irresponsible allegation,” adding that “President Trump has made it clear that the general election will happen on November 3rd.”

Mr. Biden has repeatedly pointed out that America has voted through crises including the Civil War and World War II, and has been adamant that the nation will hold an election this November, too. As the coronavirus outbreak unfolded this spring, forcing many states to postpone their presidential primaries, Mr. Biden routinely and vehemently dismissed the prospect of a delayed presidential election as “out of the question.”

“I know there’s a lot of rumors and speculation as to, ‘is the other guy going to try to postpone the election in November’ and all that,” Mr. Biden said at a fund-raiser last month. “There’s no need to do that.”

Mr. Biden has also signaled that he is acutely aware of the roadblocks to voting that Americans may face as an election unfolds amid a pandemic — and has sought to call attention to those challenges early.

“It’s a wake-up call, so the American people can understand the depths to which this president will go to maintain power,” said Representative Cedric Richmond, Democrat of Louisiana and a co-chairman of Mr. Biden’s campaign, when asked about Mr. Biden’s suggestion that Mr. Trump would try to delay the election. “And there’s a need to prepare.”

Mr. Trump has inaccurately claimed that voting by mail is closely associated with fraud. He has bashed the United States Postal Service. (“And why is that? Because he is already trying to undermine the election with false claims of voter fraud,” Mr. Biden said on Thursday, according to the pool report, as he detailed a suite of proposals to bolster voting protection.)

Russia did interfere in the American election in 2016, something Mr. Biden suggested on Thursday would be repeated — “I guarantee you they are doing it again with two other major actors,” he said, without naming those actors.

And Jon Meacham, an author and historian whom Mr. Biden respects, wrote in a New York Times Op-Ed recently about “the possibility that President Trump might take advantage of the unfolding health crisis to delay the November election. Alarmist? Not for anyone who’s paid even glancing attention to the president’s will to power and contempt for constitutional convention.”

Taken together, there is a real concern among many Democrats that Mr. Trump, who recently claimed “total” authority as president during the crisis before ceding some authority to the governors, will pursue re-election ruthlessly and with no regard for traditional norms.

“He thinks that all the power is in the presidency, and so I think it’s a very valid concern,” Mr. Richmond said.

David Pepper, the chairman of the Ohio Democratic Party, still expects the election next fall, stressing that there are constitutional guardrails protecting the contest. But in his presidential battleground state, Mr. Pepper said, Democrats are deeply concerned by the president’s criticisms of voting by mail — a practice defended by the state’s Republican governor.

Mr. Pepper said he agreed with Mr. Biden that “Trump, I think, will be tempted to do pretty much anything if he feels he might lose.”